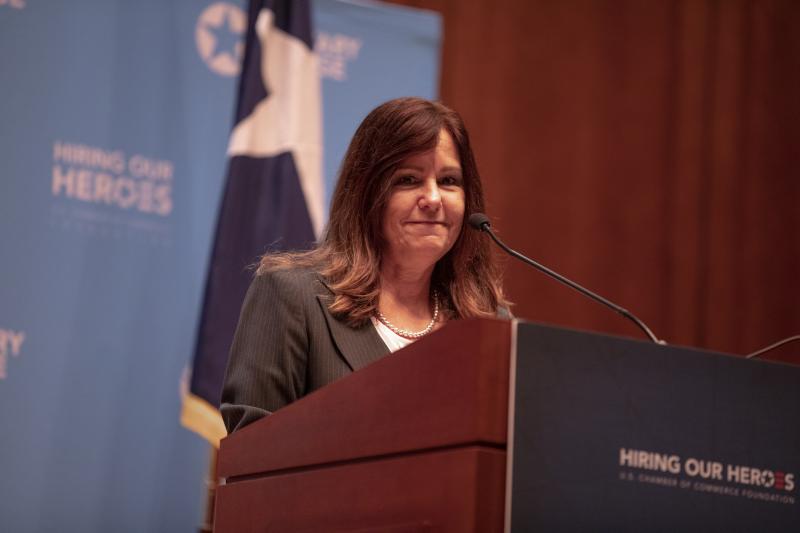 Pence was the special guest at the Military Spouse Economic Empowerment Zone (MSEEZ) Designation Ceremony for the State of Texas, hosted by the U.S. Chamber of Commerce Foundation’s Hiring Our Heroes at the Texas State Capitol in Austin on Wednesday.

“I commend the collaboration between Hiring Our Heroes, the state of Texas, and the public, private, and non-profit sectors to develop workforce solutions for military spouses,” Pence said. “Military spouses are well-educated, hardworking, flexible, reliable, and loyal. They are the kind of workers we want in the workforce. Employers who hire military spouses benefit from their tremendous talent and breadth of experience.”

This statewide Texas MSEEZ will continue to build on the success that military spouse employment programs have had in San Antonio and El Paso.

“Military Spouse Economic Empowerment Zones foster collaboration among local stakeholders to address the staggering rates of military spouse unemployment and underemployment,” said Eric Eversole, president of Hiring Our Heroes and vice president at the U.S. Chamber of Commerce. “The efforts across the state of Texas are leading community-based solutions to barriers to entry for military spouses.”

The first Military Spouse Economic Empowerment Zone was launched in San Antonio in February 2018. San Antonio, recipient of the Community Leader Impact Award at the 2019 Military Spouse Employment Summit, is leading efforts in creating an inclusive community where military spouses can succeed in their careers.

A year after the San Antonio MSEEZ launch, Pence came to Texas to celebrate the success of the local working group with military-ready employers, Military Spouse Professional Network members, and military spouses. During the one-year anniversary event, Pence discussed the relationship between military spouse employment and a strong national defense.

“Military spouse employment is a very important aspect of a strong and resilient military,” Pence said. “We know that if the spouses aren’t happy the service members are going to get out of the service. We see it. It just makes sense. I’ve given you eight years; you’ve gotten to do what you love, now it’s my turn. It’s unfortunate that it has to be one way or the other.”

“We are working to leverage relationships in an effort to support military spouses throughout the nation,” said Elizabeth O’Brien, senior director of the Hiring Our Heroes Military Spouse Program. “That starts with conversations that take place among the members of the MSEEZ working groups and continues with military-ready employers who want to hire military spouses. These employers understand the skills and experience that military spouses bring to their organization.”