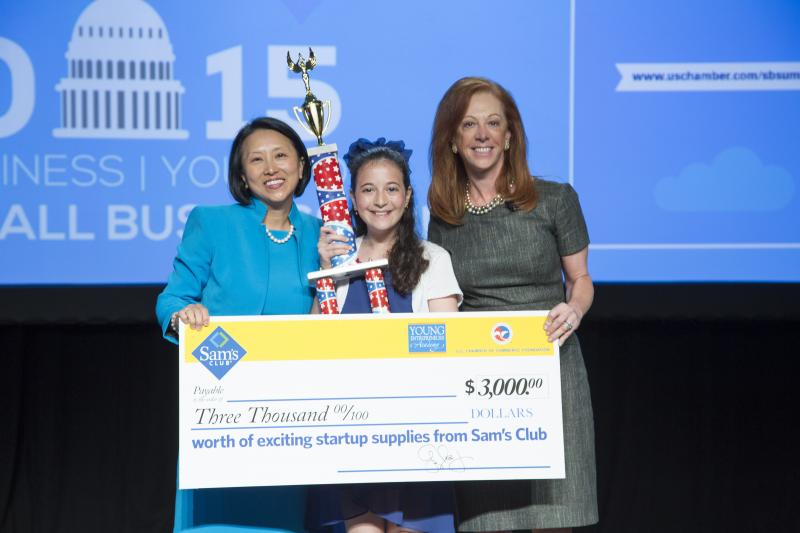 A 13-year-old from southeast Florida was honored Tuesday for her entrepreneurial spirit, securing $30,000 in college scholarships after presenting plans for a non-profit designed to boost the spirits of hospitalized kids.

Kayla Abramowitz, who recently completed 7th grade in Palm Beach Gardens, Fla., was named the winner of the National Young Entrepreneurs Academy (YEA!) Saunders Scholarship, beating out five other finalists invited to pitch their businesses to a panel of judges at the U.S. Chamber of Commerce America’s Small Business Summit.

Abramowitz won over judges with her business plan for Kayla Cares 4 Kids, a non-profit organization that collects and donates entertainment and educational materials, such as DVDs and video games, to hospitals.

Kayla Cares 4 Kids has distributed more than 6,000 items to hospitals in 45 states. Abramowitz began the organization after donating 100 DVDs to a Miami hospital, and was inspired to do more. She learned valuable business skills in building the non-profit through the YEA! chapter sponsored by the Northern Palm Beach Chamber of Commerce.  YEA! is supported by the U.S. Chamber of Commerce Foundation and Sam’s Club.

Abramowitz is no stranger to hospitals, as she has received treatments for Crohn’s Disease and juvenile arthritis. Her younger brother, Ethan, also suffers from Juvenile Arthritis, Eosinophilic Esophagitis and other gastrointestinal disorders.

“People love the idea—both the hospitals and the donators,” Abramowitz said. “People are always willing to give us items because they don’t want them anymore, and hospitals are always in need of new items.”

Abramowitz said that she’s not a “numbers cruncher” when it comes to running an organization, but that she enjoys the process of building something from the ground up.

“I love creating things, having really good ideas, and making them exist,” she said.

In addition to college scholarship money, Abramowitz won a business prize package, a shopping spree to Sam’s Club, and a trip to see Sam’s Club’s headquarters in Bentonville, Ark.

Second place went to Lane Karlitz, the founder of Study Senses, LLC, a company that seeks to help students learn through music.

Third place was awarded to Jordan Zietz, the founder of GameReef, a video game console and game rental business.

The U.S. Chamber of Commerce Foundation has been a national sponsor and partner of the YEA! program since 2011.  For more information, visit www.uschamberfoundation.org/yea.