U.S. Chamber of Commerce Foundation / A Step Ahead With a Business Leads Fellowship
Center for Education and Workforce
April 26, 2022

A Step Ahead With a Business Leads Fellowship 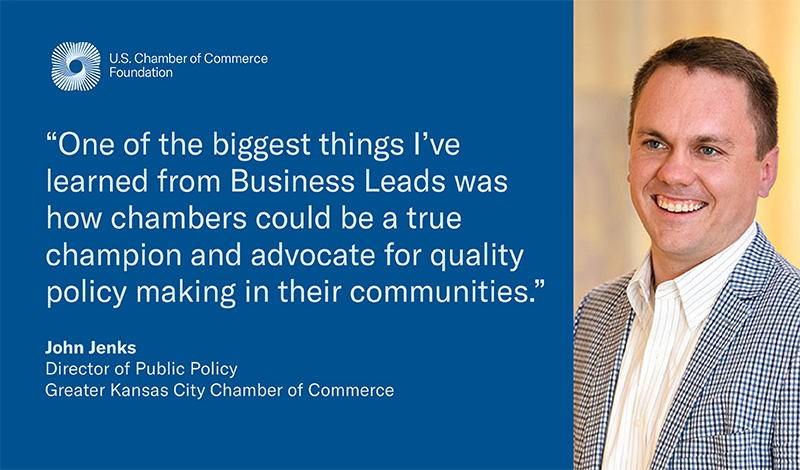 In early March, the Business Leads Fellowship Program (Business Leads) hosted a retreat in Palm Springs for its fourth and fifth cohorts, after working together virtually in 2020 and 2021. John Jenks, director of public policy at the Greater Kansas City Chamber of Commerce (KC Chamber), guided these cohorts as a homeroom leader and had his own takeaways from the sessions offered at the retreat.

“I think one of the biggest things I've learned from the program was Dave Adkisson’s session talking about how chambers could be a true champion and advocate for quality policymaking in their communities,” he said. “To be a really successful advocate, you need to go beyond lobbying, and you need to engage the community. You need to do polling, you need to do white papers; you need to bring in outside experts to really be an effective and genuine voice in your community to enact good change.”

A focus on fostering community change remains critical during a demanding labor market where the need for workers persists. The Bureau of Labor Statistics reported more than 11.3 million job openings in the U.S. economy at the end of February 2022. This figure remains largely stagnate from the job numbers at the end of last year. Suzanne Clark, president and CEO of the U.S. Chamber of Commerce, noted these concerns during her State of American Business 2022 Keynote Address. Along with policy changes around immigration, Clark also emphasized that American businesses should seek out historically overlooked workers, such as formerly incarcerated adults, to help solve this worker shortage.

Even before the COVID-19 pandemic, Jenks became concerned about the U.S. facing a significant labor shortage as more baby boomers retire.

“The Business Leads Fellowship Program got me thinking about the incredible need for human capital that is coming,” he explained. “It allowed me to position the Chamber as that workforce development voice in Topeka and Jefferson City before other chambers in either state were really focusing on it, which has really done wonders for our advocacy work and everything else in both capitals.”

The KC Chamber launched its Workforce Opportunities for Returning Citizens Initiative three years ago. Through this program, the Chamber utilizes a three-pronged approach to help justice-involved individuals gain employment in their community.

Jenks and other members of the KC Chamber work to recruit members to pledge to at least consider hiring justice-involved individuals, and they currently have 20 employers who have committed to the pledge so far. Their second focus involves policymaking at the local, state, and federal levels to ensure that bipartisan criminal justice reform measures are enacted. Finally, the KC Chamber is working with the Kansas Department of Corrections to establish a career campus inside the Lansing Correctional Facility, which is a part of the Kansas State Penitentiary.

The career campus at the Lansing Correctional Facility is a $28 million project that is estimated to take five years to complete. Currently in the fundraising stage, 80% of the project will be privately funded by the business community, and philanthropic organizations in Kansas and the Kansas City area, along with some state funding. The education facility plans to focus on six to seven key industries like IT, horticulture, food services, auto mechanic, welding, and carpentry, along with some general higher education courses.

Jenks and another colleague worked on this project in their spare time over the past two years without the help of an operating budget, to get it to where it is today. Eventually, they hope this project can serve as a model to other state correctional facilities across Kansas and Missouri and federal facilities. Jenks knows that it will take work to convince businesses to expand their hiring practices, but acknowledges it is critical for the economy and our communities.

“It's not going to be a panacea; it's not going to be a silver bullet to all your employment needs,” he said. “But just rethinking your HR strategies is going to help alleviate some of this workforce shortage. By basically arbitrarily isolating a certain amount of the population is ludicrous really, when we were in such desperate need of workers.”

As Jenks works to find other avenues to promote job growth in his city and state, he recognizes that Business Leads allowed him to gain key skills and contacts to help make that possible.

“I realized how big of a component and how critical a quality workforce is to economic vibrancy and economic vitality in our communities,” he explained. “Once that clicked in my head, I realized that this is a calling for me, and that workforce development policy, and workforce development programming in general, is not only vital for the Chamber's success, but also for the ultimate growth, and vibrancy for the greater Kansas City community.”

Check out how a Business Leads Fellowship can help further your community's workforce initiatives and economic vitality here.

A Cornerstone in Collaboration: How a Business Leads Fellowship Cultivates Community Growth
U.S. Chamber Foundation, AmerisourceBergen Foundation and iHeartMedia Join Forces to Combat Opioid Crisis in Every State
Giving Back on the National Day of Service