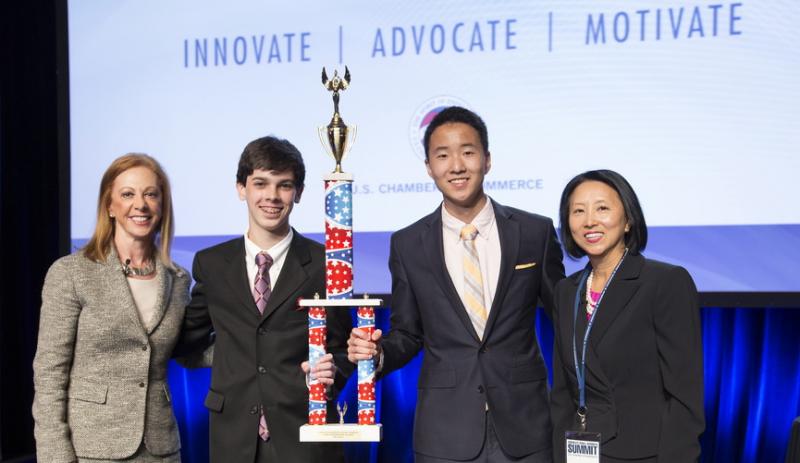 I was having lunch with a colleague this afternoon and spilled pizza sauce all over my necktie.

My very first thought? Maybe Riley Benner and Luke Zaremski were on to something.

The teenagers this week were finalists in the Young Entrepreneurs Academy (YEA!) National Saunders Scholars Competition co-hosted by the U.S. Chamber of Commerce Foundation and Sam’s Club at America’s Small Business Summit.

They pitched their brand of reversible neckties, a product just perfect for careless eaters like me.

Evidently, they also impressed a panel of top business leaders, walking away with the top prize, including scholarships and a business startup package.

Benner, 15, and Zaremski, 16, are juniors at McQuaid Jesuit High School in Rochester. Their company, Phoenix Haberdashery, beat out five other finalists, and they’ll now also have the chance to audition for an appearance on the ABC hit show “Shark Tank.”

Benner and Zaremski were smooth in their presentation, indicating that they were targeting professionals who still wore neckties to work. They deftly responded to questions from a panel of judges that included U.S. Chamber of Commerce Executive Vice President David Chavern and James Haslam, the founder of Pilot Corporation.

“A reversible necktie is a perfect gift for any man,” said Benner, who noted that Father’s Day was coming up.

The YEA! program is currently running in 96 locations across 36 states through local chambers of commerce and schools. Students begin the program with a big idea and graduate as CEOs launching their own legal, fully formed companies..

E. Philip Saunders, the namesake and founder of the National Saunders Scholars Competition, said the competition was a reminder that any young person could come up with a great idea, and that entrepreneurship was the lifeblood of the American economy.

“It’s a great big world,” Saunders noted. “You can do anything you want to do.”

The five other finalists who pitched ideas this week included: