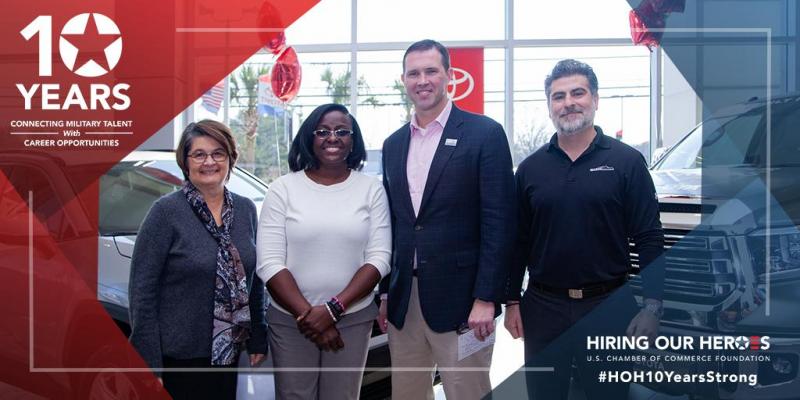 CAMDEN, SC - The U.S. Chamber of Commerce Foundation’s Hiring Our Heroes initiative and Toyota Motor North America presented veteran SSG Kashona Oakman, U.S. Army, Retired with a 2020 Toyota RAV4 during a ceremony today at Lugoff Toyota in Camden, South Carolina. The ceremony included Oakman’s father and former commanding officer, as well as representatives from Toyota and Hiring Our Heroes. SSG (Ret) Oakman was presented the Toyota RAV4 as a result of her winning entry into the annual Toyota ‘Committed to Veterans’ sweepstakes conducted late last year.

“Hiring Our Heroes could not have connected more than 700,000 transitioning service members, veterans, and military spouses with fulfilling civilian career opportunities in the last decade without partners like Toyota,” said Eric Eversole, president of Hiring Our Heroes and vice president at the U.S. Chamber of Commerce. “We thank Toyota for its support of our mission, which has been instrumental to our ability to connect the men and women who have served our country with economic opportunity – veterans like Kashona Oakman. Serving 23 years as a Health Care Sergeant in the South Carolina National Guard, SSG (Ret) Kashona Oakman spent her career caring for others, and we hope this new RAV4 takes care of her and her family. We thank her for her service to our country.”

The Toyota “Committed to America’s Heroes Sweepstakes” was open to all active duty service members, veterans and military spouses at hiringourheroes.org and received more than 20,000 entries from August 2019 through October 2019. Toyota has supported Hiring Our Heroes’ efforts to connect veterans and military spouses with meaningful employment opportunities since the initiative’s founding in 2011.

"We're excited to partner with Hiring Our Heroes to honor a local hero," said Samer Abraham, new car sales manager of Lugoff Toyota. In a surprise announcement during the presentation, Lugoff Toyota also covered the vehicle taxes and fees and donated three years of free car washes to the vehicle winner.

SSG (Ret) Oakman retired from the U.S. Army after 23 years of service in the South Carolina National Guard and currently resides in Columbia, SC region, where she is now a team leader at Blue Cross/Blue Shield. She has one daughter and enjoys spending her free time volunteering, reading, and spending time with family.

“I would like to thank this great organization, Hiring Our Heroes, for everything that they do for veterans,” said Oakman, as she was presented with the vehicle.

Hiring Our Heroes will celebrate its first decade of service to our nation’s military families with a milestone each month of this year from locations around the globe. #HOH10YearsStrong

About Toyota
Toyota (NYSE:TM) has been a part of the cultural fabric in the U.S. and North America for 60 years, and is committed to advancing the mobility of the military community as it enters the civilian workforce. Since 2011 Toyota has partnered with the U.S. Chamber of Commerce Foundation’s Hiring Our Heroes on the Personal Branding Initiative to address the issue of unemployment among veterans, transitioning service members and military spouses by helping more than 100,000 job seekers translate their military skills, volunteer experiences and expertise into meaningful employment. Through the development of first-of-their-kind, free online personal branding tools – ResumeEngine.org for veterans and transitioning service members and MyCareerSpark.org for military spouses – Toyota continues to demonstrate its ongoing commitment to help the military community successfully integrate into the American workforce.

About Hiring Our Heroes
Hiring Our Heroes (HOH) is a 501(c)3 organization under the U.S. Chamber of Commerce Foundation. The non-profit launched in March 2011 as a nationwide initiative to help veterans, transitioning service members, and military spouses find meaningful employment. Working with the U.S. Chamber of Commerce’s vast network of state and local chambers and other strategic partners from the public, private and nonprofit sectors, Hiring Our Heroes has helped hundreds of thousands of veterans and military spouses find meaningful employment through its comprehensive training and hiring events, fellowship programs, and online tools.   HOH programs and services are available in all 50 states, Puerto Rico, the District of Columbia, and on military installations around the world. For more information on programming and initiatives:  HiringOurHeroes.org; @HiringOurHeroes on LinkedIn, Facebook, Twitter and Instagram.