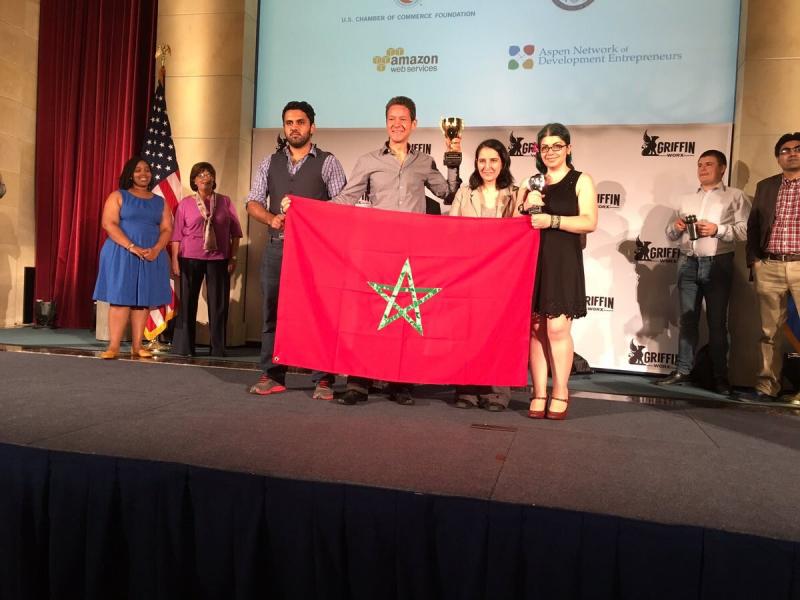 Othmane Bekkari, CEO of GoMobile poses with the trophy won at the World StartUp Cup, hosted by the U.S. Chamber of Commerce Foundation on August 5. Photo via Twitter @GriffinWorx

The U.S. Chamber of Commerce Foundation recognized the work of outstanding entrepreneurs from around the globe, as it hosted the 2016 World StartUp Cup in Washington D.C. on August 4 and 5.

Those competing in Washington, D.C. qualified for the global finals after 65 national StartUp Cup competitions. CEOs of companies from Uganda, Armenia, Morocco and other nations pitched their businesses to a panel of judges and competed for $50,000 worth of Amazon Web Services credits.

GoMobile, a mobile information service based in Morocco, won the top prize of $25,000 in Amazon Web Services credits.

GoMobile founder Othmane Bekkari said his company’s goal is to bring the power of the Internet and mobile content to parts of the world that have been unconnected. To use GoMobile, customers only need to have a basic mobile phone. GoMobile gives customers in developing countries access to a social media platform as well as a service that provides informative political coverage, connecting them to the rest of the digital world.

In addition to GoMobile, competitors included AirSave, a digital mobile banking service, from Uganda, and HY Picture, a company that creates interactive graphic novels, from Armenia.

World StartUp Cup is an organization that recognizes the achievements of outstanding entrepreneurs who strive to grow their dynamic businesses by participating in local StartUp programs and competitions.

The program kicked off on the morning of August 4 with welcome remarks by Shamarukh Mohiuddin, the Director of Economic Empowerment of the Foundation’s Corporate Citizenship Center. Mohiuddin said the Chamber Foundation encourages programs such as the World StartUp Cup to ensure the “support of the entrepreneurship ecosystem.”

World StartUp Cup first began as an idea in 2007, and was officially unveiled in November 2011 at the U.S. Chamber of Commerce. Since its launch five years ago, more than 270 Cups have taken place around the globe. Thanks to the StartUp Cups, there are now 3,735 operating businesses around the world with 11.6 million jobs created. Each new business has the average economic impact of $199,338, founders reported.

At the final competition, Founder and CEO Sean Griffin announced StartUp Cup’s transition to a non-profit organization and its rebranding as GriffinWorx. The organization’s five-year plan includes a StartUp Cup for high schools, which will focus on team building skills for young entrepreneurs; development of the “Collab” project, an entrepreneurial community center; and the expansion of its current 3,500 mentorship pool. Overall, GriffinWorx “wants to impact the universe and wants to change the world for the better,” Griffin said.