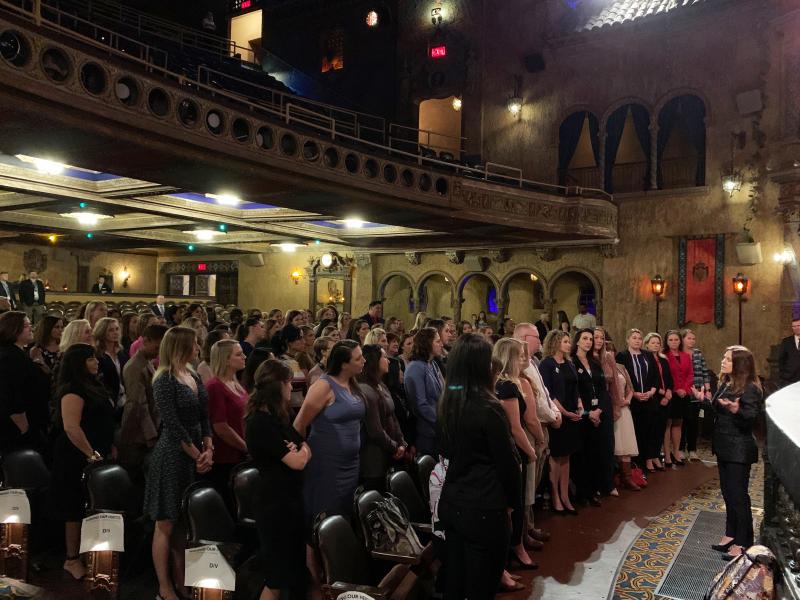 TAMPA, FL —The U.S. Chamber of Commerce Foundation’s Hiring Our Heroes announced the results from a year-long working group study of military spouse unemployment and underemployment. Mrs. Karen Pence, the Second Lady of the United States, is an honorary co-chair of the working group, whose work focuses on the important role businesses play in combatting military spouse employment barriers.

“Dual income families are part of American life and our military families require that same access and opportunity for economic stability as their civilian counterparts,” said Eric Eversole, vice president at U.S. Chamber of Commerce and president at Hiring Our Heroes. “A Collective Effort lays the groundwork for identifying ongoing challenges faced by military spouses, finding actionable solutions, and raising awareness. I believe our leaders in public, private, and non-profit sectors have an opportunity through A Collective Effort to address military spouse employment issues.”

The 21st Century Military Spouse Workforce - Military spouses are a population that exists in a highly mobile environment due to the military’s operational tempo and career requirements for service members. The current landscape requires more in-depth research and data collection around the military spouse, taking into account career propensities, critical barriers to employment, and the full military spouse lifecycle during periods of employment and unemployment.

Licensing and Credentialing - In the United States, more than 25% of U.S. workers now require a license to practice their professions, compared with only 5% who needed a license in the 1950s. The mobility of military families means military spouses face these professional and occupational licensing requirements more frequently than most. In the 2018 Blue Star Families Military Family Lifestyle Survey, 18% of active-duty spouses reported that they were not working currently because of licensing/certification issues.

Entrepreneurship - For aspiring military spouse entrepreneurs, a confusing array of resources and limited access to funding inhibits military spouses from venturing into business ownership. Currently, insufficient data exists to understand the desire and interest among the military spouse community to launch their own business.

Childcare - Within the conversation surrounding military spouse unemployment, childcare is often at the forefront of the discussion. The challenge of obtaining affordable, quality, accessible childcare is one that impacts all families, but it is felt particularly acutely in military families, who often face these challenges on a recurring basis. With each Permanent Change of Station, lack of access to quality, affordable childcare hinders the ability of military spouses to enter and/or return to the workforce.

“Employers who hire military spouses benefit from their tremendous talent and breadth of experience,” said Second Lady Karen Pence. “I applaud the important work to identify employment solutions and the continued efforts to encourage military spouses to find work in their chosen field.”

A Collective Effort lays the groundwork to continue a swell of collaboration as we turn an eye toward addressing additional challenges facing military spouses seeking a path to economic opportunity. Click here to read findings and recommendations from the working group in the full white paper.

About Hiring Our Heroes

Hiring Our Heroes (HOH) is a 501(c)3 organization under the U.S. Chamber of Commerce Foundation. The non-profit launched in March 2011 as a nationwide initiative to help veterans, transitioning service members, and military spouses find meaningful employment. Working with the U.S. Chamber of Commerce’s vast network of state and local chambers and other strategic partners from the public, private and nonprofit sectors, Hiring Our Heroes has helped hundreds of thousands of veterans and military spouses find meaningful employment through its comprehensive training and hiring events, fellowship programs, and online tools.   HOH programs and services are available in all 50 states, Puerto Rico, the District of Columbia, and on military installations around the world. For more information on programming and initiatives:  HiringOurHeroes.org; @HiringOurHeroes on LinkedIn, Facebook, Twitter and Instagram.

About the U.S. Chamber of Commerce Foundation

The U.S. Chamber of Commerce Foundation is dedicated to strengthening America’s long-term competitiveness. We educate the public on the conditions necessary for business and communities to thrive, how business positively impacts communities, and emerging issues and creative solutions that will shape the future.