U.S. Chamber of Commerce Foundation / Why the U.S. Government Is Nothing More Than an Insurance Company (With an Army)

Why the U.S. Government Is Nothing More Than an Insurance Company (With an Army) 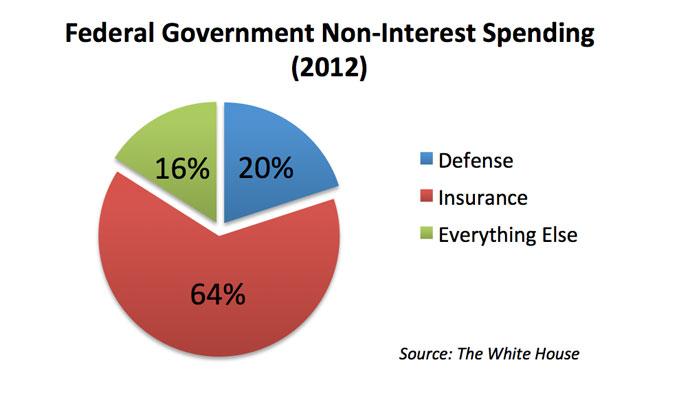 The United States federal government is not what you think it is. It’s not focused on administering justice or foreign policy or any of the traditional roles of government. No, the “core business” of government today is insurance, as The Economist recently put it. Social Security and Medicare, along with other entitlement programs, take up roughly 65% of federal spending outside of paying for interest on the national debt. That share is set to increase rapidly in the near future. A remaining 20% goes to defense spending, with everything else accounting for 16%.

Public insurance is a public good with real value, as is the essential task of protecting the homeland. But when we talk about the size of government or sequestration or any number of the budget details in the news, we need to know exactly what we’re talking about. And what we’re talking about is a government that primarily aims to protect Americans against hardship.

This is not an original description of today’s government. Paul Krugman, Ezra Klein, and others have all brought up this point before. What these writers have tended to do is use the framing of “government as insurance” to fight particular kinds of spending cuts brought up in whatever was driving debate at the time. This seems short-sighted, to say the least.

Rather than get caught up in today’s “government by crisis,” we need to step back and ask a few critical questions about public spending:

By not asking these questions, America’s political leaders beget a crippling amount of uncertainty in the economy. Federal government spending alone, after all, accounts for about 22% of gross domestic product. When spending decisions are made, for better or worse, they ripple through the economy. A recent study found that policy upheaval around health care and entitlement spending, together with tax issues, was found to have increased uncertainty by 50% from 2007 to today.

Calvin Coolidge once said that the “business of government is business.” Today, the government is in the insurance business. We must begin to face this reality.