Education as a Civil Right

43rd President of the United States 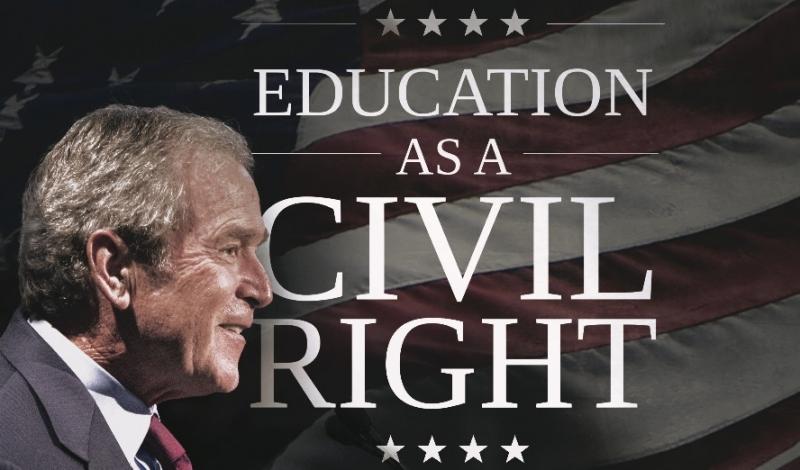 The 1960s began a limited role for the federal government in American education. The results have been better than some have claimed—and worse than many had hoped. These programs—particularly Title 1—helped break down the dual educational system in the South. Poorer states have made some progress relative to richer states. Since the 1970s, achievement gaps between whites and minorities have narrowed.

During the last 50 years, educational progress has been generally positive—but completely insufficient. Education in America is no longer legally separate, but it is still not effectively equal. Quality education for everyone, of every background, remains one of the most urgent civil rights issues of our time.

Beginning in the 1990s, many states—including Texas—lost patience with the pace of change. These reform efforts gathered into a national accountability movement and culminated in the bipartisan effort called No Child Left Behind. It is a rare kind of issue that could unite two leading Democrats, the late Massachusetts Senator Ted Kennedy and longtime California Congressman George Miller, with me. We found common ground: Schools must demonstrate improved results on reading and math for minority children—or face consequences if they don’t. It is hard to imagine that anything so basic could be so controversial. It was, and it still is.

Between 1999 and 2008, reading scores for African-American 9-year-olds increased about two grade levels. Math scores for Hispanic 9-year-olds rose about the same. The achievement gap was closing. Sadly, the gains have stalled.

No law is perfect. Every legislative instrument eventually requires adjustment. But the problem comes when people start to give up on the goal. Some have ideological objections to any federal role in education. Some are too comfortable with the status quo. The alliance between ideology and complacency seems to be getting stronger. I fear that the soft bigotry of low expectations is returning. And for the sake of America’s children, that is something we cannot allow.

Let me focus on one fact that is uncomfortable even to contemplate. According to the most recent National Assessment of Educational Progress (the Nation’s Report card), the average reading score for a white student at age 13 is about the same as an African- American at age 17—that’s a four-year, four-grade achievement gap. In an economy where higher skills are ever more necessary, that is scandalous. In a nation dedicated to equal opportunity, that is scandalous. Among the political heirs of Martin Luther King, Jr., Lyndon Johnson, Everett Dirksen, and Hubert Humphrey, this should be a national scandal, demanding action. 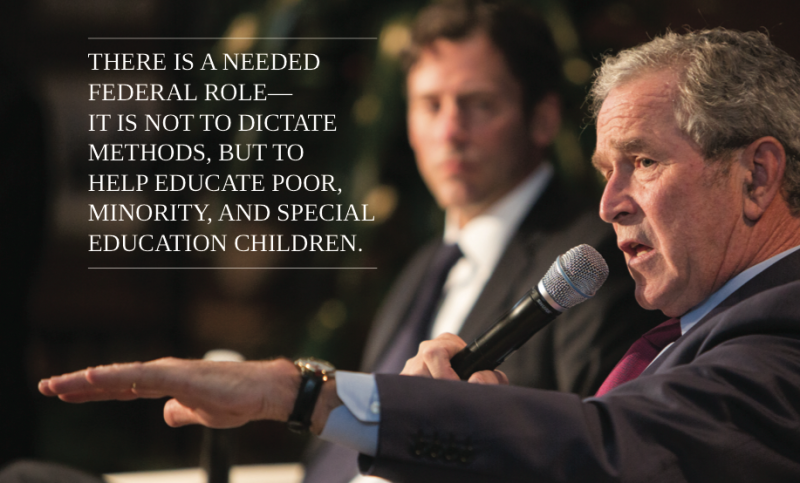 None of the solutions are easy. We don’t have, and should not have, a federal education system. Power and responsibility are properly spread on many levels—so the need for reform and creativity is spread on many levels. And sometimes teaching professionals feel trapped in the same massive, immutable structures as parents and children.

But whatever difficulties we face, they will not be addressed by weakening accountability. There is a growing temptation among public officials in both political parties, at the federal, state, and local level, to lower expectations. But any education gains we make will eventually be undermined by lowering our sights in the classroom. Without meaningful accountability, our sights into reality will be dimmed. Without meaningful accountability, it is poor and minority children who suffer the most.

The goal of ending achievement gaps should unite Republicans and Democrats. It should unite teachers and parents, business leaders, and civil rights leaders. It should unite anyone committed to a reasonable assessment program, transparency with results, and holding the system accountable—anyone who believes in unleashing local creativity while maintaining clear measures and objectives. There is a needed federal role—it is not to dictate methods, but to help educate poor, minority, and special education children. But when we invest taxpayers’ dollars, it is only right to insist upon results. And when we find poor results, it is only right to blow the whistle on mediocrity.

On the issue of education, we are dealing with the meaning of America, and the extent of its promise. Equal opportunity is a unifying national purpose, but it is not a natural condition. It must be purposely and carefully built by every generation for the next generation. It is the continuing goal of education reform—and it really is the continuing work of the civil rights movement.

George W. Bush served as the 43rd President of the United States and is a longtime proponent of improved education standards and academic performance.

Childcare and Health and Safety are Top Two Reopening Issues, According to Employers
More Than One in Five Working Parents Are Unsure Whether They Will Fully Return to Work
COVID-19 Impact on Childcare