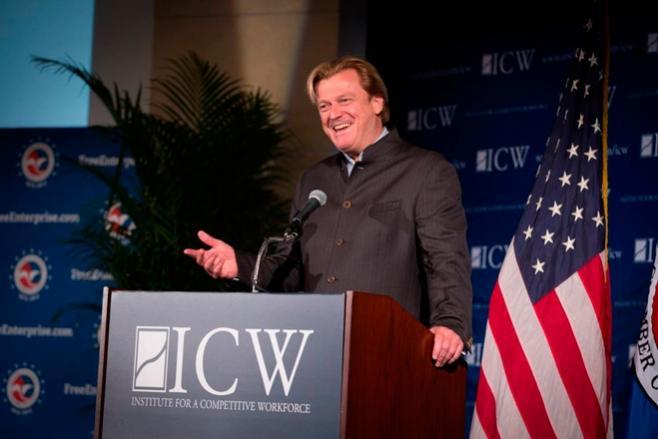 As someone who trained as a professional boxer, Overstock.com Chairman and CEO Patrick Byrne can certainly take some punches. He started his speech at the U.S. Chamber by noting that he is public enemy number one, according to the National Education Association. It’s a distinction that the outspoken supporter of school vouchers and education reform is quite proud of.

Byrne’s best known for taking a bankrupt company specializing in selling liquidation inventory online and turning it around. He took Overstock.com public in 2002 and today, it employees 1,500 people and raked in $1 billion in sales last year.

Following his speech at the Institute for Competitive Workforce’s Help Wanted event, Byrne sat down with FreeEnterprise.com to talk about the skills gap, school vouchers and the future of the online retail industry.

FE.com: How does your experience as an entrepreneur shape your work in education reform?

Byrnes: In a couple of ways. To be an entrepreneur you are constantly looking for the most efficient way to turn resources into the best output to create the most value for your customer base. So I look at the school system and I say, ‘Well, is that organized in a way given the vast inputs—and it is $700 billion a year—for the results we’re getting? I think we’re getting a pretty measly outcome for those inputs.

The explanation is there must be something wrong with the system. There’s something wrong with the black box that’s taking all those inputs and generating such a weak output. When you look in the black box, it’s organized from the top down. That’s the problem. You are always going to have bureaucratic and inefficient organizations if they’re organized from the top down.

The entrepreneurial way is all about pushing decisions to the knowledge frontier, as economists call it. Pushing decisions, authority and information to the people on the front lines so that they can make the best decisions.

FE.com: What open positions does Overstock find hard to fill?

Byrne: Really our base ones are software development and technology. I love our wonderful Indian and Chinese developers, and we’re trying to hire hundreds more. I do wish we could [hire more developers] in the United States, but we cannot get enough qualified ones, whereas Indian and China are churning out loads of qualified technologists.

Outside of that, I’ve run other companies elsewhere in the country where you can’t count on people to have basic computer literacy or even what I think of as normal high school skills of being literate, being able to read and write coherently in grammatical sentences, things like that. A high school degree doesn’t mean what it used to which is someone who’s basically competent with numbers and English and could present themselves appropriately and such. You don’t know if that’s what you’re getting anymore with someone out of high school.

I will say, Utah is pretty exceptional. In many parts of the country, as of 10 years ago, you couldn’t assume when someone walked through the door that they knew how to use a mouse or email. Utah was quite prescient. Thirty years ago, the University of Utah and BYU set up computer science departments while much of the rest of the country seemed to think of them as vocational schools or something. They set up great computer science departments and the workforce in Utah is unbelievably computer literate. They come in from high school and they not only know how to use a mouse, they’re comfortable with spreadsheets, PowerPoint, other documents.

FE.com: What skills is Overstock looking for in its’ entry level employees?

Byrne: Even more than a comfort with computers are the skills that I think high schools should impart, which is basic numeracy, the ability to read and understand what you read, and the ability to write grammatically and coherently. Just as square as it sounds – it’s reading, writing and arithmetic. Just the basics.

But I would also say a general sense of how to comport yourself in business. We have a very tolerant, open and diverse workforce. We embrace diversity. So etiquette becomes important. People have to understand how to comport themselves in a business environment, which doesn’t mean stuffy, but it means being able to show a respect for other people and just having basic etiquette.

FE.com: We heard similar comments from other business owners at today’s event. So what do you think high schools are teaching if they aren’t teaching the basics or etiquette?

Byrne: I think it’s a jobs program and the unions and the guild are more focused on it as a jobs program rather than a results program. Look at just what happened in Chicago.

FE.com: Explain this concept of the “guild.”

Byrne: Look, it’s not just the union. It’s the union plus these levels of bureaucracy behind your local school system, at the district, county, state and federal levels. It includes government people, it includes unions. Those layers are sucking up a tremendous amount of resources without adding anything to the output. The real problem isn’t in the schools. It’s those invisible layers behind the schools.

If it were a healthy functioning system ....you’d certainly be picking up through the school system that set of skills you would need to get a job. And there would be a feedback system called the market. You wouldn’t send your kid to a school that teaches ancient Aramaic and just that. But because that link has been broken, the schools are free to teach anything they want, which is essentially what they are doing.

FE.com: You touched briefly on Chicago. What role do unions play in shaping this current crisis?

Byrne: They play an overwhelming role, and the answer lies in the quote by the President of the American Federation of Teachers in 1985, a guy named Albert Shanker who said, ‘I’ll start worrying about children when they start paying union dues.’ I think that describes in a nutshell what’s going on. They’re hiding behind this blue smoke and mirrors of “oh we’re the teachers, we care about the children, but at the end of the day, they’re unions who care about children the day they start paying dues. Until then, the unions are just fighting for the interests of their members.

FE.com: Getting off education for a moment: What are the biggest challenges facing online-only retailers?

Byrne: I think that ultimately the model that the gods of economics want us to find is probably brick-and-click. It’s probably the most efficient model. There are a lot of people that are uncomfortable online, or they want to examine something before they buy it or they want to be able to return it easily. So I think the brick-and-click model is where everyone will converge. Walmart and Target have already gotten there. There have been rumors for a couple of years that Amazon is going to open 700 stores because they’ve realized this. My guess is that’s probably the best business model. Liquidation, which is what we do, doesn’t lend itself very well to brick-and-mortar because you’re getting very small lots and you don’t have mass efficiencies, so we’re not going to go there. I promise you will never see an Overstock store.