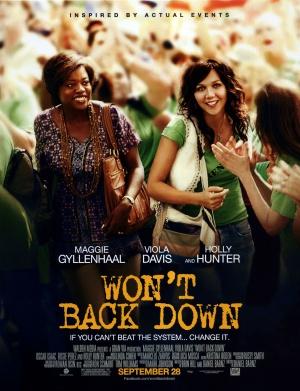 Let's be honest with ourselves, education reform can seem a little "wonkish" at times. One of the toughest challenges for the reform community is engaging the general public to take action. News stories riddled with policy jargon about teacher tenure, school choice, school governance, and student tracking aren't necessarily 'above the fold' headlines. However, cinema has the power to attract a broad audience and stir emotions that policy-laced news stories rarely reach. Case in point—the enormous success of the 2010 education documentary, Waiting for 'Superman’. This documentary about the failures of the nation’s public education system resonated with countless people around the country and grossed more than $6.4 million in the process.

Another movie is on the horizon that has the potential to reach an even larger audience than Waiting for ‘Superman’.  On September 28, the film, Won't Back Down, will be released in theaters in nearly every major metropolitan region. Unlike Waiting for ‘Superman’, Won't Back Down is a fictional story based on actual events. The film stars Maggie Gyllenhaal, Viola Davis, and Holly Hunter and is about a single mother who is desperately trying to create change in her daughter's chronically failing school.

Shot in Pittsburgh, the movie touches on many of the education reform principles that Waiting for ‘Superman’ discusses, including teacher quality, teacher tenure, and school choice. However, this film introduces the "parent trigger" law to the audience as a major plot line. This California law (the inspiration for the movie) allows parents control of underachieving schools if 51% of parents sign onto a petition demanding change. To date, the only successful parent group to "pull the trigger" are the parents of the Desert Trails Elementary School in California.

The Institute for a Competitive Workforce will kick off a cross country tour in October to screen the film and hold forums discussing education issues in local communities with business, education, and community leaders. The goal is to continue to shine a spotlight on the state of education in each city/state and work to identify solutions to the pressing issues in each community. Though the focus will not be on the merits of “parent trigger” the movie does allow for a robust discussion about the opportunities for communities to effect change in underperforming schools.

To learn more about Won't Back Down, please visit the Walden Media website.