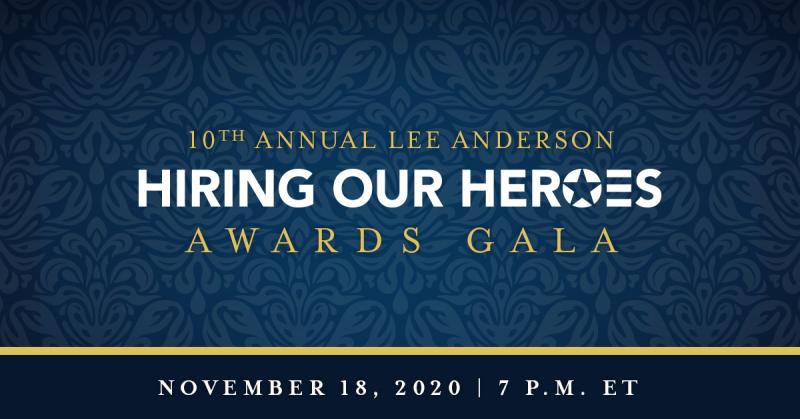 WASHINGTON, D.C.— The U.S. Chamber of Commerce Foundation’s Hiring Our Heroes recognized awards winners for its 10th Annual Lee Anderson Hiring Our Heroes Awards Gala, presented by USAA. Distinguished speakers, awards finalists, and guests from the military community all watched the live-streamed celebration on November 18 from their homes and offices around the world.

USAA Chief Brand Officer Tony Wells, a graduate of the United State Naval Academy who served as a Marine Corps infantry officer, provided special remarks during the gala about the value that veterans and military spouses bring to an organization. USAA has had a longstanding commitment to veteran and military spouse hiring, and has been collaborating with Hiring Our Heroes since 2011.

“In our fast pace of life, we often forget to stop and celebrate success,” Wells said. “I appreciate the opportunity that Hiring Our Heroes provides leading companies to exercise their influence in raising up our communities, customers, and employees, which makes both business sense and is the right thing to do.”

The 2020 President’s Award for Lifetime Achievement was presented to Howard Schultz and Sheri Kersch Schultz, co-founders of the Schultz Family Foundation. The foundation’s commitment to removing barriers for young adults and ensuring veterans and military families are integrated in their communities has equalized opportunity for underserved populations.

“Our work with young men and women returning from the military to civilian life is so important to us because they go to war to protect our rights and our liberties. Now it's our responsibility to help them make the transition to civilian life,” said Sheri Kersch Schultz.

The couple said they were humbled to be recognized by Hiring Our Heroes.

“We're grateful for this honor and we will continue to do all we can to support the men and women in uniform,” said Howard Schultz.

Since 2011, Hiring Our Heroes has recognized the tremendous contributions of those who have gone above and beyond to help our nation’s heroes at the Lee Anderson Hiring Our Heroes Awards Gala. This year was no different.

“As we looked back at the accomplishments from this year, I was inspired by the awards finalists. These organizations and individuals are leading with persistence,” said Eric Eversole, president of Hiring Our Heroes and vice president at the U.S. Chamber of Commerce.

Steve Robinson Post-9/11 Veteran Employment Award, presented by Prudential Financial, was given to Salesforce. The finalists were Deloitte, Indeed, and Lockheed Martin Corporation.

Wounded Veteran and Military Caregiver Employment Award, presented by Comcast, was given to the United States Postal Service. The finalists were Northrop Grumman and Veterans Village of San Diego.

Military Spouse Employment and Mentoring Award, presented by USAA, was given to First Command Financial Services. The finalists were Deloitte, Werner Enterprises, and Zeiders Enterprises, Inc.

About Hiring Our Heroes
Hiring Our Heroes (HOH) is a 501(c)3 organization under the U.S. Chamber of Commerce Foundation. The non-profit launched in March 2011 as a nationwide initiative to help veterans, transitioning service members, and military spouses find meaningful employment. Working with the U.S. Chamber of Commerce’s vast network of state and local chambers and other strategic partners from the public, private and nonprofit sectors, Hiring Our Heroes has helped hundreds of thousands of veterans and military spouses find meaningful employment through its comprehensive training and hiring events, fellowship programs, and online tools. HOH programs and services are available in all 50 states, Puerto Rico, the District of Columbia, and on military installations around the world.