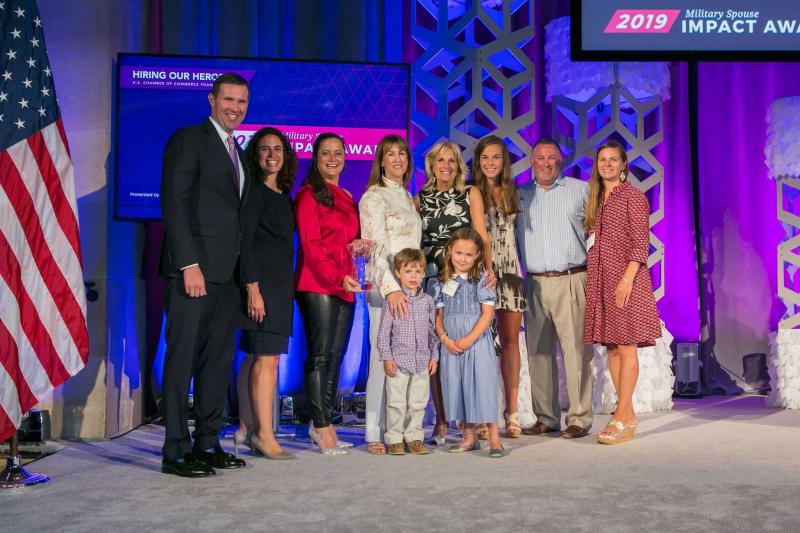 “The individuals recognized at our inaugural Impact Awards are  helping to create stronger communities that support and provide economic opportunities for military spouses," said Eric Eversole, vice president at the U.S. Chamber of Commerce and president of Hiring Our Heroes. “Their actions have created tremendous impact in the lives of military spouses and the collective communities working to support them.”

“Hiring Our Heroes has long committed itself to connecting military spouses with economic opportunity,“ said Elizabeth O’Brien, senior director of military spouse programs for Hiring Our Heroes. “These awards shine an important and much-needed light on leaders across the spectrum from municipalities to volunteers to small business owners to executives.”

Impact Award for Lifetime Achievement, presented by Booz Allen Hamilton, for demonstrated hiring, mentorship, and support of military spouses in their search for meaningful employment: Sheila Casey has long served as an inspirational leader for military spouses. From her work as the spouse of the former Army Chief of Staff to her role as the Chief Operating Officer of The Hill, as well as her leadership roles at various non-profits, Sheila epitomizes the strength, courage and determination it takes to be a career-minded military spouse.

Military Spouse Volunteer Impact Award, recognizes a volunteer who has made great contributions to strengthen and empower his or her community and the military spouses in that community. The inaugural impact award recipient is Mary Reding, founding member and past president of the Military Spouse J.D. Network.

Community Leader Impact Award, recognizing a community and its leaders for their efforts in creating a strong, inclusive community that allows military spouses to thrive both inside and outside of the gates. The 2019 award recipient is the City of San Antonio, TX.

About Hiring Our Heroes

Hiring Our Heroes is a nationwide initiative to help veterans, transitioning service members, and military spouses find meaningful employment. Working with the U.S. Chamber of Commerce’s vast network of state and local chambers and other strategic partners from the public, private and nonprofit sectors, Hiring Our Heroes has helped hundreds of thousands of veterans and military spouses find meaningful employment through more than 1,200 job fairs in all 50 states, Puerto Rico, the District of Columbia, and on military installations overseas; a suite of free online career-based resources; the Hiring 500,000 Heroes campaign; and the Hiring 100,000 military spouses campaign.

About the U.S. Chamber of Commerce Foundation

The U.S. Chamber of Commerce Foundation is dedicated to strengthening America’s long-term competitiveness. We educate the public on the conditions necessary for business and communities to thrive, how business positively impacts communities, and emerging issues and creative solutions that will shape the future.

Four Ways to Be More Inclusive at Work
Stationary Bikes That Foster Community: A Look at Harlem Cycle
Explore the Benefits of Life-Long Learning with Bendable