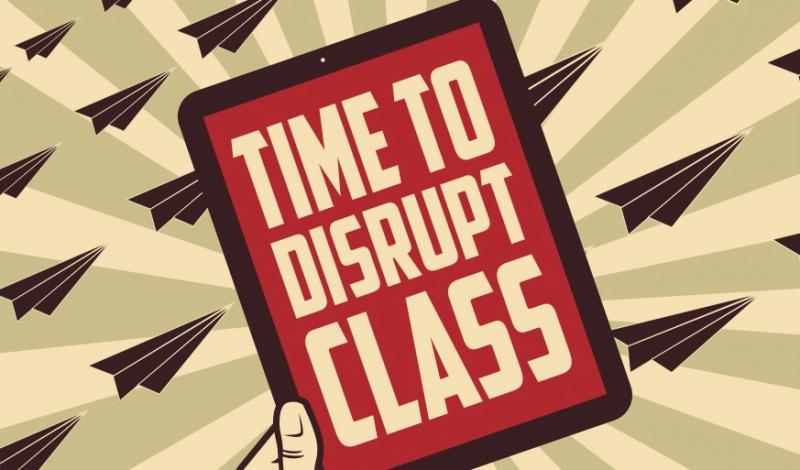 This article was published in the Fall edition of Business Horizon Quarterly.

We would never tell American companies to compete with China and the rest of the world using only business strategies from the 1800s. But for some unexplainable reason, that’s exactly what we’re doing to America’s public education system.

The origins of the school day as we know it today largely date back to the factory models of the Industrial Revolution. With the exception of the blackboard becoming a whiteboard, very little has changed about our classrooms during the past 200 hundred years. In the meantime, the digital age has transformed every other aspect of society.

After serving eight years as chancellor of New York City’s public schools, this is a problem I know all too well. During my tenure as chancellor, we worked hard to shake up the status quo by establishing models that blended the best of new technology with classroom learning, like the iSchool and The School of One. Though bold and transformational, these schools were the exception and not the rule.

While some schools in America introduced technology into the classroom the right way, many others got it very, very wrong. Far too often, initiatives I’ve observed over the years treated technology as a panacea. What many of these schools learned—or soon will—is that you can’t just throw a bunch of laptops over the fence and hope that things will change. Tech for tech’s sake is the last thing we need in education.

To truly transform public education in this country, we must use technology at scale to empower teachers, reimagine the way students learn, and fundamentally transform the way schools and school districts are managed. 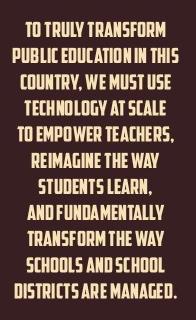 At its best, educational technology helps teachers do two things: manage classrooms more efficiently and effectively; and personalize instruction for every student by giving them what they need when they need it.

Today, in most schools, there aren’t enough minutes in the school day to begin with. Every second lost from instruction is learning time we don’t get back. Technology can help free educators up from administrative tasks,like taking attendance, grouping students, or distributing handouts. This gives them more time to do what they do best: teach.

Technology is at its best when it helps teachers address the learning needs of each individual student in real time. The typical teacher has a classroom full of kids with very different abilities. Some are excelling and ready for more challenges; others are struggling and in need of more help. The rest are somewhere in between.

For years, the only way most teachers could try to reach a majority of their students was by “teaching to the middle.” Though this approach is well intentioned, it hasn’t had the intended impact. Students ready to move ahead get bored. Struggling students slip further behind. And students in between are left to tread water.

Now, thanks to technology, we have the ability to give every educator a digital teaching assistant that can surface critical information in real time. When several students are experiencing a common problem with math, but the rest of the class is ready to move ahead, it is no longer necessary to check in with students, one by one, to find out. And if someone is having trouble with a timed writing exercise and hasn’t typed a word, a teacher can know exactly who needs help and when, without distracting the rest of the class.

While using technology effectively may be a challenge for some teachers to master (and ensuring they have the right levels of training and support is critical to getting this right), for their students, it comes as second nature. Children entering the sixth grade this fall were toddlers when smartphones, digital media, and social networks first emerged. These technologies are woven into every aspect of their lives. Yet, as one student recently told me, “when I walk into school, it feels like stepping into a museum.”

The revolution in technology has created a corresponding revolution in students’ expectations. So many of the experiences they have online have been tailored just for them. Why should education be any different? Netflix can tell them what movies they might be interested in based on films they’ve previously viewed. Educational technology should be able to tell them which math tutorials they might find helpful based on the problems they missed from last night’s homework.

And it’s not just about making instruction more relevant and rigorous. Thanks to technology, deeper learning can be a lot more fun. At Amplify, the education technology firm I head, we’ve worked with some of the world’s best independent games studios to develop educationally enriching games for subjects like math, science, and English Language Arts. Instead of spending hours going to war with an alien planet, our students are learning how to fight off infection inside a human cell.

Technology can make learning more engaging, but it can also help transform the way we engage our learners. After a recent report showed that only 39% of first- generation college students graduated in four years, the University of Texas turned to a new data science team to help design a program aimed at keeping those students in school and on track toward their degree.

Using data to help identify these students and give them meaningful supports and interventions as early as possible would have a significant impact on the number of students that graduate ready for success in either college or career. This isn’t the stuff of science fiction. These are actionable steps we can take right now, thanks to the power of technology.

Over the next five years, close to a third of our country’s 3 million teachers will retire. This means two things: We’re set to lose some of our best and most experienced educators over a very short period of time, and a huge influx of tech-savvy millennials will be replacing them. We must give these new teachers all the resources and support they need to be successful in the classroom. A big part of that will be making sure they have access to the best educational technology.

I am absolutely convinced that educational technology done right—emphasis on “done right”—will have one of the most transformative impacts on how—and how well—our students learn and perform. Every child in this country deserves access to a world-class public education. Sadly, we know that we’re now giving far too many of our kids much, much less than they deserve. That’s bad for them and bad for the country.

We’ve spent long enough looking at bar graphs showing our students lagging behind the rest of the world. Educational technology has given us a real opportunity to transform learning as we know it. The only question is, “Are we ready to embrace and use it intelligently?” I hope for the sake of our children that the answer is yes.

In January 2011, Joel I. Klein became CEO of the Education Division (now called Amplify) and Executive Vice President at News Corporation, where he also serves on the Board of Directors.

Prior to that, Mr. Klein was Chancellor of the New York City Department of Education where he oversaw a system of over 1,600 schools with 1.1 million students, 136,000 employees and a $22 billion budget. He launched Children First in 2002, a comprehensive reform strategy that has brought coherence and capacity to the system and resulted in significant increases in student performance.