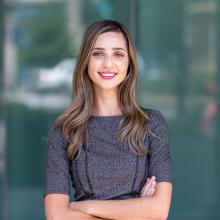 Yagmur Cosar is the Senior Director, Communications at the U.S. Chamber of Commerce Foundation. She leads all aspects of the Foundation’s strategic communications efforts, driving outreach to key stakeholders and media to raise awareness of major initiatives and tell the story of business for good.

Yagmur brings a strategic mix of corporate communications, public affairs and foreign policy experience, having held positions with some of the world’s leading public relations agencies. She was previously a Vice President at Burson Cohn & Wolfe, where she led fully integrated communications campaigns and public affairs programs for major global brands, Fortune 500 companies, industry associations, foreign governments and non-profit organizations. Prior to that, she was an Account Supervisor at FleishmanHillard, having advised a wide range of clients in the public, private and non-profit sectors on communications strategy and reputation management.

Yagmur also has served as a Public Relations Officer at the Turkish Embassy in Washington, where she oversaw the Embassy’s communications with key stakeholders, including the U.S. Congress, Administration, and U.S. and Turkish media. She launched campaigns that deployed traditional and social media outreach, stakeholder engagement and cultural diplomacy.

Yagmur holds a master’s degree in media and public affairs from The George Washington University.