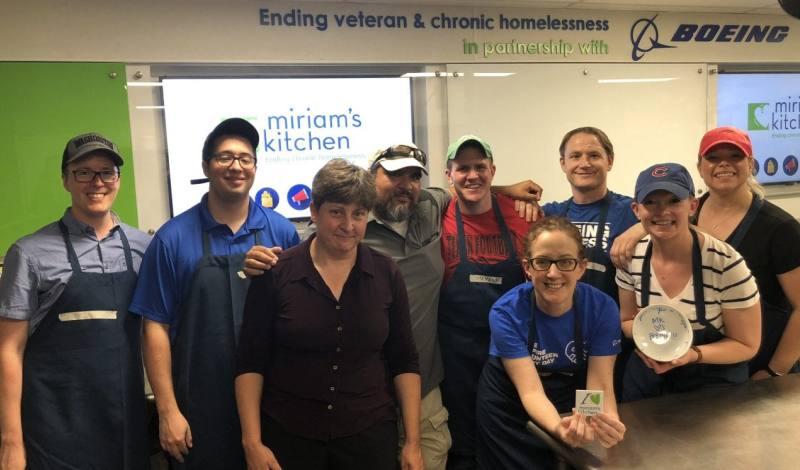 On any given night, more than 40,000 American military veterans across the country don’t have a place to call home. On average, two thirds of those homeless veterans served our country for at least three years, while a third have served in a war zone, only to “return home” to no home, according to the National Coalition for Homeless Veterans. Several hundred now reside on the streets in and around our nation’s capital.

For Boeing, a company with a major presence in the Washington area and a long history supporting our military, this was a problem that could – and had to – be solved.

Using a data-driven approach, the company, which employs thousands in the D.C. area, partnered with Miriam’s Kitchen, a nonprofit that’s committed to ending chronic homelessness in the nation’s capital, to develop, fund and execute a long-term plan to combat veteran homelessness. Specifically, Boeing started by sending its elite government operations team to help Miriam’s Kitchen’s leadership develop and implement a strategic plan for “The Way Home Campaign,” a movement that Miriam’s Kitchen co-leads with the help of 4,500 volunteers and more than 100 other organizations.

Since the partnership began, Boeing and Miriam’s Kitchen have helped cut veterans homelessness by 43 percent in the Washington area.

“Boeing’s investments showed that ending homelessness is not charity,” Scott Schenkelberg, President of Miriam’s Kitchen, wrote in materials sent to the U.S. Chamber. “It’s a problem with a cost-effective solution that saves lives.”

He added: “Boeing’s support helped make the case that ending veteran and chronic homelessness is critical to strengthening businesses and communities more broadly within the District.”

The veteran homelessness initiative is a key pillar of a broader focus on community service at Boeing, which was named a finalist for a U.S. Chamber of Commerce Foundation Corporate Citizenship Award (more on the awards below).

The Illinois-based company’s employees donated more than $34 million to charitable causes and approximately 400,000 volunteer hours to organizations around the world last year. In addition, the company responded to the federal tax reform package signed early this year by making an additional $100 million investment in corporate giving via charitable grants and a higher employee gift-match.

“Every day, Boeing team members dedicate their unique skills and passion, along with their time and financial resources, to communities across the globe—driving positive, lasting change and inspiring others to give back,” Boeing President, Chairman and CEO Dennis Muilenburg said.

The U.S. Chamber of Commerce Foundation’s Corporate Citizenship Awards recognize the most strategic and innovative corporate citizenship programs from businesses, chambers, and associations of all sizes. Nominations for the 2019 Citizens Awards will open in February. Click here for more information.