U.S. Chamber of Commerce Foundation / The Best Investment in the World

The Best Investment in the World

The most lucrative and safest investment in the world – almost guaranteed to deliver outstanding financial returns as well as improving civic well-being and economic development – is to invest in the economic and social empowerment of women.

Last month for International Women’s Day, BCLC, together with the Ford Foundation and the United Nations, hosted How Women’s Economic Empowerment Strengthens Business. The conference left me thinking that if I had only one dollar to invest, investing it to create more opportunities for women is undoubtedly how I would use it.

This amazing investment opportunity arises from the most tragic of circumstances. The world – across developed and developing countries alike – persists in negligently under-valuing or outright disempowering half of its population. If we changed our perspective and did the right thing the economic outcomes alone would be mind-boggling. According to various speakers:

What’s the investment we need to make? Nothing more, as Luis Ubiñas, President of the Ford Foundation states, than to treat woman and girls equally. 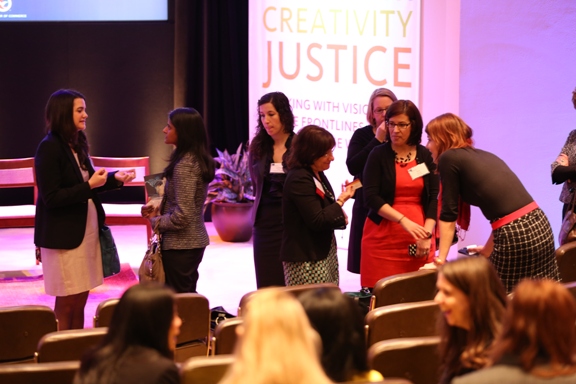 Unfortunately what should be easy to do finds roadblocks around too many turns. Ambassador and UN Senior Advisor for Partnerships Tomas Christensen notes that many UN staff call March 8th “Women’s Combat Day” because there are so many things to improve. Reuters notes that the economic lives of nearly a billion women around the world have been “stunted, underleveraged or suppressed.”

Consider that in the U.S. 20 CEOs in the fortune 500 are female, women start every two out of five businesses; 56% of college undergrads are women; and 51% of personal wealth is held by women. Yet women are 29% more likely to be poor than men in US. And domestic violence against women remains a serious problem.

A group of insightful companies – often working hand-in-hand with innovative partners – are taking action to scale up their own investment and to encourage others to do the same.

Intel, for example, sees that one of the most self-defeating actions a country can take is to deny or discourage women from participating in the knowledge revolution. With about 2.4 billion internet users globally, 23% fewer women than men are online. That’s a gap of 200 million and it’s expected to widen over the next three years to 350 million. The gap is particularly acute in developing countries. In sub-Saharan Africa, for example, 43% fewer women than men have online access.

Intel is leading a call to action to double the number of women online in the next three years. The result will have profound benefits as women use the internet to earn more income, gain jobs, and find ways to become more independent. The outcome – an additional $50-70 billion a year in global income with $13-18 billion more a year added to developing countries’ GDP.

Walmart represents a very different kind of investment; it’s using its global scale to support women owned business, create more jobs for women, and to better satisfy customer needs. Walmart’s Global Women’s Economic Empowerment Initiative aims by 2016 to source $20 billion from women-owned businesses in the U.S. and to double sourcing from women suppliers internationally, to empower women through training, market access, career opportunities, and education, and to increase gender diversity among major suppliers. In addition, the company intends to create a profitable business through its Empowering Women Together site – a platform for products from women working in developing countries.

Closer to home, Carolyn Berkowitz, President of the Capital One Foundation, notes that the poverty gap between women and men is larger in the U.S. than any other industrialized country. Capital One is tackling the problem by creating a $4 million fund in human capital investment to advance sector-specific work force development and promote new opportunities for women in low-income communities.

These are but a few examples. ExxonMobil is working on a major study with the United Nations Foundation on proven and promising investments to improve women’s income generation potential. Other companies bullish on investing in women’s empowerment include Ann Taylor, Citibank, Coca-Cola, and Goldman-Sachs, among numerous others. Each of their commitments herald the potential for a sea-change in the way the world treats women. Yet it is crucial to remember, Alyse Nelson of Vital Voices stated during the March 8th event, in reality it’s not the world that needs to help women, rather it’s the world that needs their help.

* Note that I’ll continue my reflection from March 19th on the “Big Push” to scale-up responsible business practicessoon.