U.S. Chamber of Commerce Foundation / Hiring Our Heroes Staffer Up for Military Spouse of the Year Honor 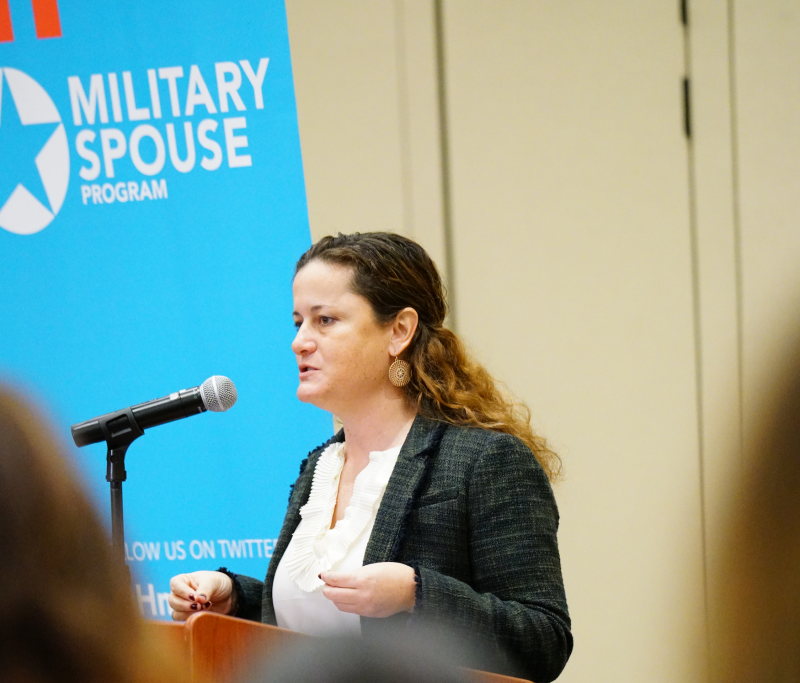 Elizabeth O'Brien, director of Hiring Our Heroes' Military Spouse Program, speaks at an event in February at Fort Bragg, NC.

If you ask Elizabeth O’Brien about all of the places she’s lived, she might have to pause to try and remember them all. Hawaii. Kansas. Missouri. Germany. There are seven in all, including her latest stop in Washington, D.C., where her husband, an Army major, is stationed at the Pentagon.

Along the way, O’Brien has raised three young daughters, coached basketball, done some motivational speaking, and served as an advocate for military spouses in the United States and Europe.

As a result of her dedication, she was recently nominated as Military Spouse of the Year, a national contest presented by Military Spouse Magazine and Armed Forces Insurance.

“There are so many great nominees, it’s an honor to be among them,” said O’Brien, who works as Director of the Military Spouse Program at Hiring Our Heroes. “This is an opportunity to bring the issue of military spouse employment to the national level.”

Two of her colleagues nominated O’Brien for the award. They touted her work in advising companies on how to connect with military spouses seeking good jobs, and for developing communities and professional networks at military locations across the United States and overseas.

O’Brien’s nomination comes at a time when Hiring Our Heroes has placed a new emphasis on addressing the employment challenges facing military spouses. Unemployment among spouses remains stubbornly high—as much as 25%, according to some measures—and HOH has worked to reduce that figure through targeted hiring fairs and other resources. Most recently and under Liz’s guidance, HOH brought In Gear Career, an established nonprofit, under its umbrella of resources. In Gear Career offers chapter-based career development and networking opportunities at military locations.

“We’re working really hard on building communities and support networks,” O’Brien said. “Those are the keys to success.”

Military Spouse of the Year nominations were collected and organized by base, district, or state. The public can now vote through February 9, and the base winners will move on for consideration to the top 18. The National winner will be announced on May 12.