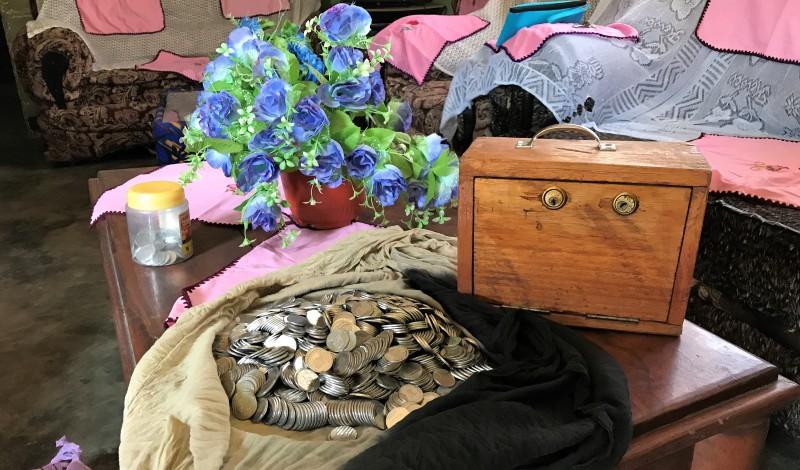 The entrepreneur is a 59-year-old widow in the city of Mbeya, Tanzania. She has a covered dark corner space in an open market (photo below) where she sells soft drinks during the day, adds beer in the evenings, and also sells prepared meals in an adjacent space. She recently took a 6-week long business training course from TechnoServe, which included instruction on how to access M-Pawa, a new Vodaphone mobile savings platform. This should allow her to gain better control of her income and invest in her business. 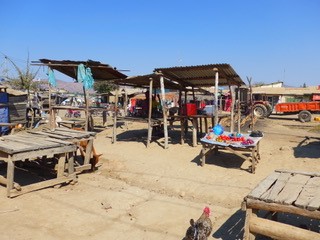 When we met her one recent morning, she had just built and was preparing to open a mini ‘supermarket’ a few blocks away from her home (photo below). She spoke well of the training she had received, especially how it had taught her to separate business from personal income and keep business records. She was using M-Pawa to save. 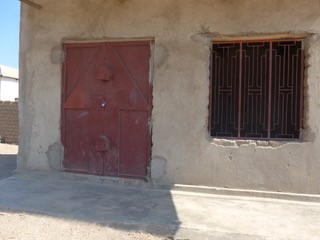 Savings were no news to her, however. She had been saving informally for years, with mental discipline and ingenuity—separating and labeling savings for different purposes.

She invited us to her home to see her savings strategy; and from her (locked) bedroom she unearthed three saving tools: a glass jar with coins, a gigantic treasure trove of coins overwhelming a bag containing them, and a wooden lockbox a carpenter had built for her.

When the glass jar was full, she would transfer the coins to the bag, which some day would be used to buy a car. The lockbox savings were for emergencies, and M-Pawa for her business investments. She exemplifies the mindful saving behavior of many women entrepreneurs—micro and small—in developing countries, as we are learning.

CGD, with support from the ExxonMobil Foundation and its research and implementing partners, is coordinating two impact evaluation studies of mobile savings and business training on women’s economic empowerment—one in Tanzania with the World Bank Africa Gender Innovation Lab, and one in Indonesia with J-PAL associated researchers (from the London School of Economics, Kellogg at Northwestern University, and Pompeu Fabra University), the World Bank East Asia and Pacific Gender Innovation Lab, Mercy Corps Indonesia, and Bank Mandiri, in addition to those mentioned above. The descriptive baseline results already convey revealing trends.

Women entrepreneurs like to save, and save more than men

Results from the Tanzania baseline with a random sample of 4,000 urban women entrepreneurs show that they like to save: 90 percent of the women have saved some money in the past 12 months, 40 percent of which is invested in the business. Partial baseline data of 1,289 randomly selected female and male entrepreneurs in 107 villages in East Java, Indonesia show that women are more likely to save than men: in the last 12 months 78 percent of women versus 61 percent of men reported having saved. This data adds to a growing literature on women’s preferences to save, as discussed in a past CGD blog post, that spans across countries as different as Chile, Kenya, and Nepal.

But with less access to bank accounts, most women save informally

Studies increasingly support this idea of mindful saving seen in the Tanzanian entrepreneur’s resourcefulness with saving strategies. The use of commitment devices, including lockboxes, has increased women’s savings in Kenya and the Philippines, among other places. Mentally allocating or earmarking savings for a purpose makes the money less fungible and helps women feel less obligated to share available money with others.

How can we bridge the gap between banks and women? By encouraging more banks to serve women and more women to access banks?

But, obviously, women entrepreneurs should not have to rely entirely on the mind or insecure jars, bags, or lockboxes to save. Increasing their access to formal savings is long overdue, but how? Mobile savings hold great promise, given that they can help significantly reduce transaction costs that can be unduly heavy for women. Recent evidence from Kenya showcases the potential impact of mobile savings on women’s earnings. The question that guides us is: how can we encourage more women entrepreneurs to access formal savings, and are mobile savings a particularly fitting solution?

Demand and supply side interventions

The Tanzania and Indonesia pilots are seeking answers to some of these questions using rigorous designs. Tanzania tests if access to a new mobile savings technology on its own can improve women’s business profits, or if it must be in conjunction with business skills training. The baseline data looks encouraging; business skills appear to complement savings in predicting profits. 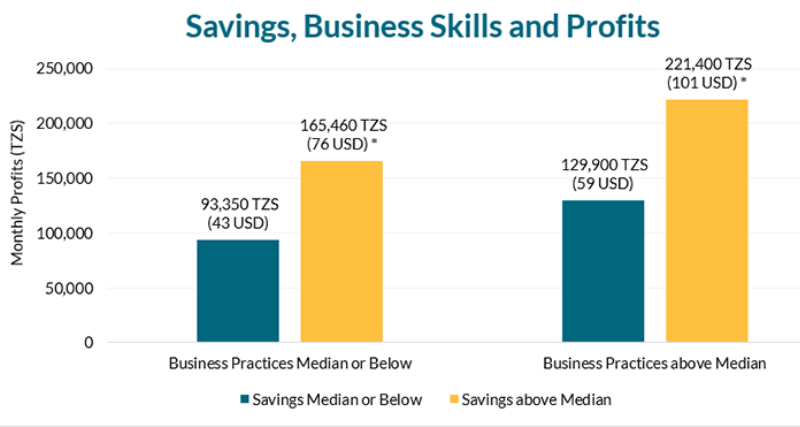 While the Tanzania study measures propensity to save from a demand-side (supporting entrepreneurs), the Indonesia study tests the supply (supporting financial institutions). It looks at whether varying financial incentives to bank agents promoting a new mobile savings product makes a difference in increasing entrepreneurs’ uptake of saving products, and if it helps bridge the gender divide.

This blog reflects initial findings from CGD’s ongoing field research in Indonesia and Tanzania on the impact of mobile products to promote women’s ability to save. More results are underway.

[Editor’s Note: This article originally appeared on the Center for Global Development blog here. Mayra Buvinic will be presenting exciting preliminary results from the Tanzania study and new evidence on the power of savings at the U.S. Chamber Foundation’s International Women’s Day Forum. Click here to learn more.]