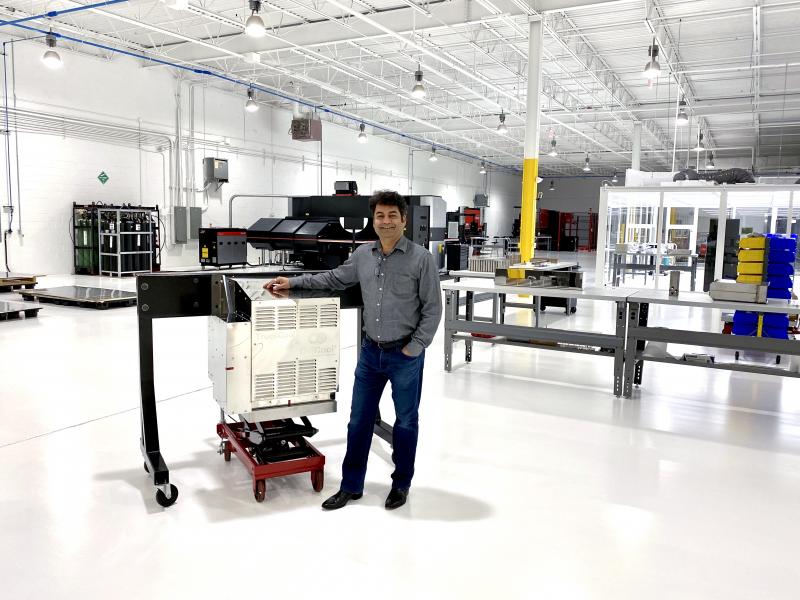 Ravikant Barot, founder and CEO of OxiCool, who has developed the world’s only truly green air conditioner.
© OxiCool

Imagine the ability to cool a vehicle, home, or building without the need for manmade refrigerants. Consider further that this environmental magic is achieved through the molecular processing of water as a refrigerant in an efficient and economical closed-loop system.  Now take stock of the idea that employing the technology at scale could reduce the largest burden on the electrical grid—air conditioning – while relieving both the consequences and causes of a changing climate.[1]

All of that may sound like science fiction, but it’s a shining example of what can happen when entrepreneurial passion, technical know-how, and the power of the U.S. business system meet.

The story spotlights the indispensable assets and personal qualities that propel successful entrepreneurs while illustrating the many reasons why the United States remains the world’s most fertile garden of opportunity in the world for innovators, dreamers, and doers.

The tale begins 15 years ago in India where a former merchant ship captain named Ravikant Barot, a rising star in the Ford Motor Company, spawned an idea to solve a nagging problem afflicting his workplace and community

Headquartered in Mumbai, Maharashtra, a region known for its intense year-round heat and humidity, Ravikant Barot was moved by the discomfort experienced by young locals who had little choice but to report for work soaked in perspiration from their scorching motorcycle or motor scooter commute. Convinced that an affordable solution must exist, he conducted an extensive search for a ready-made solution.

Barot’s compassion and drive soon blossomed into a passion to bring a solution to market himself, and he decided to forego the satisfaction of his comfortable position at Ford. This decision was the first step in a journey of trial and triumph that brought Barot – a Wharton School graduate born in India – back to the United States to pursue his vision.

The first step was to find an existing intellectual property on which he might build. His search produced an intriguing possibility in the filing cabinets of the United States Navy.  The Navy had pursued the development of a personal cooling system for helicopter crew deployed in the Middle East. The initiative was shelved when the engineers could not work out how to reduce the unit’s weight to the required 4-pound limit.

Barot moved his family to an apartment near the Patuxent River Naval Air Station in Maryland, home of the Naval Air Warfare Center Aircraft Division (NAWCAD). Over the next 12 months, he hammered out a Cooperative Research and Development Agreement (CRADA) with the Navy authorizing him to pick up where the Navy engineers left off.

Agreement in hand, the one-person enterprise called OxiCool was born. Barot rolled up his sleeves and went to work on improving the technology.

Months of trial and error and relentless work ensued. His hard-earned eureka moment occurred when Barot stumbled on a way to have the heat exchanger freeze in a matter of seconds. This led him to conceptualize a closed-loop system that would allow continuous operation, making it viable for much larger systems like home and rooftop air conditioners.

The revelation brought him to a strategic milestone. While the size and weight of the system was still unsuitable for personal wear, his improvements had a much larger, even revolutionary application. He had innovated an efficient, green cooling-solution for physical spaces.

Excited about the huge prospects of his invention, two priority tasks stared the young inventor in the face.  One was to find an inaugural customer. The second was to obtain capital to finance further development of the invention—not an easy task for an enterprise with early-stage technology that had promising applications but no firm product yet.

A potential customer soon emerged. A former colleague of Barot’s from Ford had taken a job with one of the world’s largest heavy truck manufacturers. The company was seeking solutions to address a traffic safety measure limiting the consecutive hours long-haul truck drivers could operate before resting. The rest requirement means that drivers pull off the highway to bed down in their cab and idle their trucks to power the air-conditioning. The practice came with unintended consequences for drivers, motor carrier companies, and environmental regulators – unwanted noise, the consumption of costly fuel, and an increased carbon emissions footprint. After one meeting with Barot, the company’s Director of Product Planning joined hands with OxiCool.

Barot also needed to find investors very soon. Enter the public sector. The State of Maryland had established TEDCO to provide financial resources and other critical support for early-stage technology. It’s a $150,000 investment in OxiCool enabled Barot to continue his work.

Continue he did, and so did the progress. On behalf of the OxiCool – Navy partnership, the Navy filed a patent application for the cooling process. The patent filing was soon followed by a formal joint development agreement with the truck maker to apply the cooling system. The US Patent and Trademark Office awarded the Navy-OxiCool patent, and it would go on to win the NAWCAD’s first Patent of the Year Award.

Amid the exciting progress, friends from Wharton referred him to the Commonwealth of Pennsylvania’s early-stage technology fund.

Pennsylvania’s funding, however, was contingent on a dollar-for-dollar private-sector match.  The additional financing would be critical to pay for the expensive equipment, engineering expertise, and time necessary to develop a prototype that could be translated into a serviceable, scalable product at a saleable price-point.
In 2012, angel investors stepped in and established an investment company to support OxiCool.

Executing his strategy entailed long days and sleepless nights, but his devotion to his mission was unwavering.

On January 1, 2019, Barot celebrated his first commercial success. OxiCool was designated as a Tier 1 supplier to a major truck manufacturer.

Recently, OxiCool moved from its modest development and testing facility, into a production facility a few miles away. Arrayed across the polished epoxy floor of the large, clean, scalable facility is an assembly line of state-of-the-art robotic manufacturing equipment. Around it buzzes OxiCool’s growing team of associates.

The OxiCool crew is diverse in gender, race, culture, and background—an asset that Barot says imbues the company with intense creativity and energy. Yet, the team members have much in common. Each possesses the technical expertise to operate and oversee the enterprise’s digital masterworks and AI-based production processes that represent the future of advanced manufacturing in the United States—the foundation of a manufacturing renaissance.

Moreover, each shares the big vision of OxiCool’s founder, partners, and benefactors – summed up in a caption elegantly etched into the gleaming, stainless steel housing of its cooling units: “Cooling without Consequences.”

Barot built a versatile factory where electronic designs and machine-based manufacturing allow easy transition to other product launches. Barot is channeling his extraordinary team’s passion for a cleaner planet toward bringing green cooling to homes and buildings across the globe, through technologies branded by OxiCool as HomeCool™, RoofCool™, and MoCool™.

The world presently has about 1.8 billion AC units in operation, the vast majority in three countries: the U.S., China, and Japan. With the world growing hotter by the day, it is estimated that just by 2050 that number will grow to around 6 billion units the world over. The stakes literally cannot be higher.

Sounds like a job for the U.S. innovation system. Unlike virtually all other AC systems, pure water is OxiCool’s refrigerant. And since it never leaves the sealed operating chamber, there are no emissions connected to the cooling phase whatsoever.

Barot is convinced that, at scale, OxiCool will make a major, worldwide contribution to greenhouse reduction, clean air, and energy savings. Moreover, he emphasizes that it will help reduce the massive and growing operational burden on the U.S. electric grid. This summer’s blackout in New York City showed the dangers that lurk when summer heat meets an aging grid. It will only get worse as the planet warms.

The OxiCool team has weathered drawbacks and difficulties. In the face of all it has persisted and prevailed, committed to the strategic mission of breaking two negative feedback cycles that endanger the quality of human life—the problems created when rising temperatures increase demand for more air conditioning and when energy used to cool our homes and offices increases greenhouse emissions, further burdening the electric grid.

So, what do perspiring employees, an aspiring entrepreneur, and an inspiring vision for the future all have in common? A classic American story.

As Barot says, the story is just the beginning, and there are miles to go. Even so, what makes the case study so compelling is not only the invention’s profound potential or that its protagonist exemplifies the character of the prototypical American entrepreneur.

The story is noteworthy because it entails many of the powerful ingredients that make American free enterprise and the country’s business system so unique and successful. Fully harnessed and continuously strengthened, they form a recipe for prosperity in the decades ahead:

Barot is taking his team to the CES® 2020 in Las Vegas in January 2020 to introduce how disruptive innovation in a technological field that no one has substantively improved for a century -- but upon which humanity relies for its very existence -- can make the lives of billions of people safer.

As optimistic as Barot is about the hard-earned progress and the bright future of OxiCool, he has never forgotten where it all started. Every day he thinks back to his roots in India and about his friends, colleagues, and neighbors who had little choice but to begin the workday overheated and uncomfortable. He is confident that one-day OxiCool will crack the code on the cooling suit even as he devotes his work to the larger mission of helping protect the planet for us all. That’s pretty cool!