U.S. Chamber of Commerce Foundation / The Path Forward, According to Dr. Anthony Fauci

The Path Forward, According to Dr. Anthony Fauci 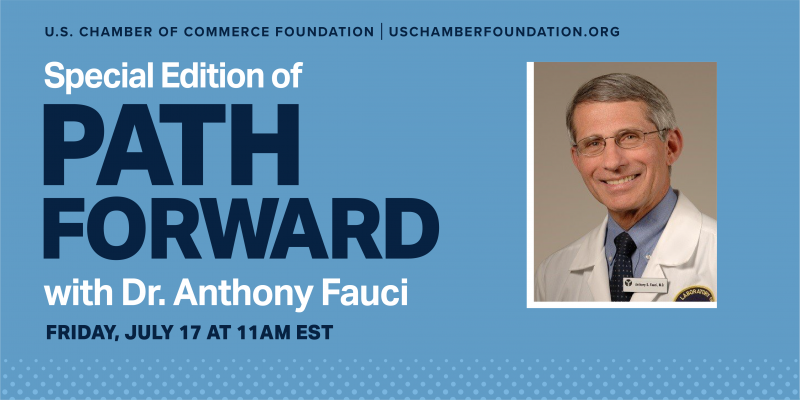 Dr. Anthony Fauci is one of the world's leading experts in infectious disease. He was appointed as the director of the National Institute of Allergy and Infectious Diseases in 1984, and since then, he has conducted extensive research to prevent, diagnose, and treat infectious diseases. He has advised 16 presidents on everything from HIV to tuberculosis to Ebola and now, COVID-19. He is the winner of the National Medal of Science and the Presidential Medal of Freedom, the highest civilian honor in the United States.

In this special episode of our Path Forward series, we had a chance to hear Dr. Fauci’s thoughts on the state of the pandemic, when he expects to see a vaccine, and what businesses should be doing to prepare for the coming months

Dr. Fauci, can you provide us with a broad overview of the state of the pandemic?

We’re obviously in a difficult situation. We have now a very large outbreak. There have been close to 140,000 deaths, and we have several million infections. That's the sobering news. There are some bright spots that we need to capitalize on, namely areas of the country like the New York metropolitan area, which have been through a very difficult time, but have turned it around.

We've got to do something about that because we want to open as soon and as safely as we possibly can. And the way to do that is by a careful process of opening up under the guidelines that we have put out from the White House task force.

Do you think it's hard for the United States to get effective testing in place?

Well, obviously, we got off to a slow start with testing for a number of reasons. But things right now with testing are much better than they were before. If you look at the number of tests that have been done, as well as the projection over the next month or two of the number of tests that we can be able to do, I believe you're going to start to see a change for the better in both the availability of the test and when you get the results back.

There's been a lot of conversation about the World Health Organization and why it's important that the United States has a connection with these global health organizations. Can you explain that?

When you're dealing with an infectious disease, this is a global issue, particularly in the 21st century where we are able to travel from one part of the globe around the world in 18 hours.

We saw that when it emerged in a well-defined geographic area in China, and then all of a sudden more than two hundred and twenty countries have been involved. It is global by nature, so we need global organizations and global cooperation.

What do you think the odds are that people could get re-infected, that you could get this virus over and over again? And how does that change how we treat this particular disease?

We don't know the answer to that question, but we can make some extrapolations based on knowledge of other viruses. If you get infected and you recover, you've made an adequate immune response against the virus. If that virus does not substantially change, you can assume that you're going to be protected for some period of time after you recover.

The question that we need to know is, how long does that protection last? That will guide us to get the optimal vaccination. Immunity does wane with some infections and with some vaccinations. In response, you do something like give a booster shot, which is not that difficult to do.

THE ROLE OF BUSINESS

We hear a lot about how the virus has impacted business, but it's also true that businesses impacted the virus. Can you talk a little bit about the role of the private sector in fighting this pandemic?

It has always been that way. It is that way now. And I believe it always will be that way. The private sector plays a major role. I’m a firm believer in the role of the private sector and how important it is, but also how these public private partnerships across a lot of society's challenges are so important to success for all of us.

Business owners are really trying to balance health and their livelihood. There’s a risk of reopening and a risk of staying closed. What's your advice to the business community in America?

Follow the guidelines that we spent considerable time putting together for opening America again with the benchmarks for the phase one, the phase two, the phase three. Take a look at those guidelines and follow them because the public health apparatus shouldn't be looked upon as the obstacle in the way of opening. It should be a gateway, a vehicle and a facilitation of opening, because if you follow them, it is unlikely you will have to backtrack the way we're seeing going on in several states right now.

The U.S. Chamber represents businesses of every size, every sector and every community across the country. Which data should those business leaders be watching? How do we know what is actionable for us?

The CDC has been the lead agency in both surveillance and response outbreaks. You can get information on a daily basis, and even some in real time, about the dynamics of the outbreak. So I would point you to the CDC website to get the kind of information that I think would be very valuable to you. There are other websites that have very similar information. Johns Hopkins is one. But I would recommend that, for the purposes that you're asking, that you stick with the CDC.

I would urge the leaders, the local political and other leaders in states and cities and towns to be as forceful as possible in getting your citizenry to wear masks.

Are mask requirements something that we're going to need local and state governments to require us to do?

As we all know, our society from the beginning of the Founding Fathers is a Federalist society in which the states have certain prerogatives and powers and responsibilities. I can say as a public health official that I would urge the leaders, the local political and other leaders in states and cities and towns to be as forceful as possible in getting your citizenry to wear masks.

Physical distancing is the most important, but practically, when you're living your life and trying to open up the country, you are going to come into contact with people. And for that reason, we know that masks are really important and we should be using them.

Audience question from Hope Cupit, president and CEO of the Southeast Rural Community Assistance Project: Why is COVID-19 impacting black and brown people disproportionately? And what does this demographic need to know to better protect themselves?

This is a real problem that we're facing. If you look at the data of minority populations, particularly African-Americans, Latinos, and to some extent, Native Americans, there are two things that make them bear a disproportionately more serious burden of COVID-19. Often, the kinds of jobs in which minority populations find themselves in put them in a more vulnerable position to get infected. They are more often put in situations where they may not be able to prevent themselves from getting infected.

When you put those things together, greater incidence of getting infected and greater prevalence of comorbidities which make your outcome worse, it's easy to understand that the minority communities are at much greater risk. You can address some of them immediately by putting resources for better and easier testing, identification, isolation, contact tracing in areas where there's demographic overrepresentation minorities. We can do that now. What's going to take longer to fix is the decades and decades and decades old social determinants of health, which we must address and diminish that disparity of these underlying conditions in the minority population.

We’re going to get over this. We've been going through this very difficult period for the last five and a half, six months. Sometimes you think it's never going to end. It will end. It will end through public health measures and science. Hopefully sooner rather than later.

Many communities are grappling with the question of how and when to open schools. How should we be participating in those conversations, and what factors should we be considering?

This is obviously being discussed intensively as we prepare for the fall. My advice is that we need to first take a look at the big picture. If you look at things that come out from the American Academy of Pediatrics, the unintended consequences of keeping children out of school on the kids themselves and the parents who need to go to work, the default position should always be we need to do as best as we possibly can within the framework of safety to get the children back to school.

Having said that, we live in a big country that is geographically and demographically diverse. There will be parts of the country with a level of virus activity is so low that you don't have to modify anything at all. But clearly, there are parts of the country that make you want to pause and say, wait a minute, if we are going to bring the children back to school, we've got to account for the safety for the children and teachers. So we may want to modify what we do - separate the desks by a certain amount, require masks for children within an age group in which they are at least feasible, perhaps rotating the kinds of schedule.

I think if we keep that in mind, we'll go a long way to getting the schools open safely.

Are schools ever going to go back to the way that they were?

The answer to that is yes. We’re going to get over this. We've been going through this very difficult period for the last five and a half, six months. Sometimes you think it's never going to end. It will end. It will end through public health measures and science. Hopefully sooner rather than later.

We feel cautiously optimistic that we are on the road of getting this under control. Yes, we will get back to normal with schools, and we will ultimately get back to normal with every other aspect of our lives. That's a that's a wonderful thing for us all to focus on to get more serious about masks and social distancing and washing our hands, because there is a there is a normal on the other side.