Transition Trucking Drives One Veteran Closer to His Career Dreams 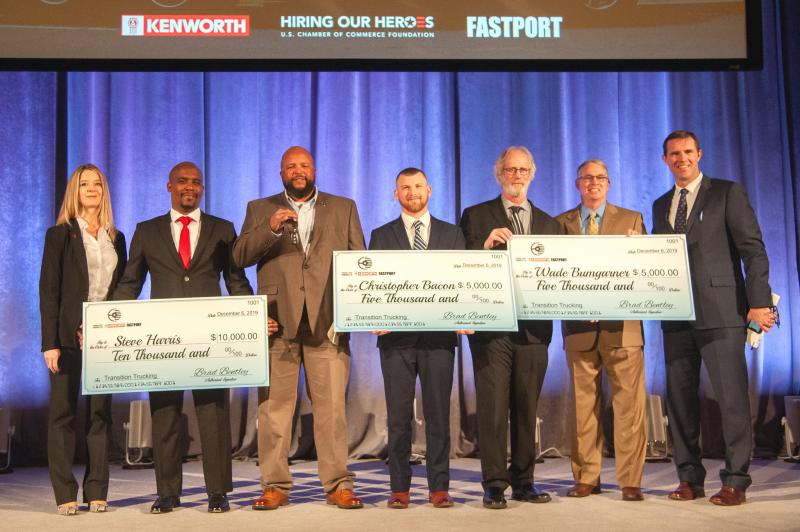 After 24 years in the U.S. military, Joseph Campbell wanted his next career to have purpose along with a paycheck. That pursuit of purpose led him to the trucking industry.

“I chose trucking as a career path because it made me feel like I am still a part of something larger than myself,” Campbell said.

On December 6, Campbell was named the 2019 Transition Trucking: Driving for Excellence award winner during a ceremony at the U.S. Chamber of Commerce. As the winner, Campbell was handed the keys to a new Kenworth T680 truck – and the opportunity to be an owner-operator.

Campbell said he is thankful for this opportunity.

The Transition Trucking: Driving for Excellence award campaign began in 2016 to highlight career opportunities in the trucking industry among veterans, reservists, and National Guard members. The Transition Trucking campaign is one way Hiring Our Heroes, Kenworth Trucking, and FASTPORT pay it forward to veterans.

"It’s not just about winning this vehicle. It’s about paying it forward and giving them the chance to establish their own career and potentially hire other drivers down the road,” said Eric Eversole, president of Hiring Our Heroes and vice president at the U.S. Chamber of Commerce.

Tom Donohue, Chief Executive Officer of the U.S. Chamber of Commerce, said veterans find a family in the trucking industry.

“Truckers are proud and patriotic Americans who believe in enterprise, entrepreneurship, hard work, and driving their own destiny,” Donohue said. “It’s hard to think of better candidates to fill jobs in the trucking industry than veterans.”

Campbell served as a telephone technician in the U.S. Marine Corps from 1991 to 1996. In 2000, Campbell returned to military service; this time serving as a paralegal in the U.S. Army. He retired from the Army after 24 years in the U.S. military in 2018.

He currently works as a professional truck driver in Roehl’s Flatbed Division. He completed his first year of employment accident free, completed the first year of a two-year apprenticeship program, is training to become a certified trainer, and is a member of the Driver Advisory Group.

Campbell was one of four finalists for the 2019 award. The other finalists were:

The Transition Trucking: Driving for Excellence award began in 2016 to highlight the opportunities in the trucking industry and inspire companies to hire veterans, reservists, and members of the National Guard. Click here for more information or to nominate a veteran for the 2020 award.