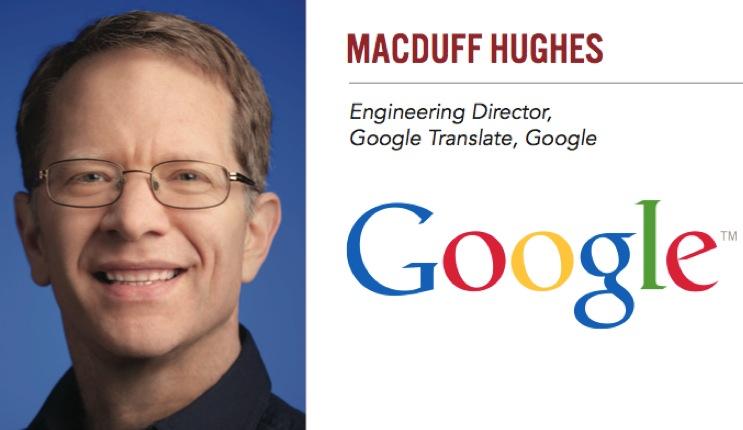 Macduff Hughes joined Google in 2007 as an engineering director and currently leads the Google Translate development team. His previous projects at Google include management of Google Accounts and Google Voice. Macduff holds a bachelor’s degree from Stanford University and also studied at the University of Trier and Columbia University.

Foundation: Has anything surprised you about how people use Google Translate?

Hughes: It turns out a lot of people use it to test their own ability to speak a second language. They use it to practice before talking to someone in a language they don’t know well. I love hearing stories about the day-to-day uses of Translate. From communicating with a store clerk when you’re traveling abroad or using the camera-input feature to decipher a menu or street sign, people are always using Translate in ways that help them better connect with one another.

Foundation: When creating highly technical and innovative tool, are there any risks you will not take?

Hughes: We take the security and privacy of our users— and the rest of the Internet—very seriously. Even a small risk of harm is something that we actively work to avoid. User trust is our most important asset. It’s very hard to recover if we lose it.

Foundation: What does failure teach you and your development team?

Hughes: To think big. It’s inevitable that some, if not most, of the things we try will fail. But that’s OK, because we’re thinking big and trying things that have huge impact. We learn from every failure and get to think even bigger the next time.

Foundation: What is the biggest risk you've ever taken?

Hughes: We’ve seen many milestones in Translate, including releasing Haitian Creole as a language immediately in the aftermath of the earthquake in 2010, or Persian Farsi in the wake of the Iranian protests in 2009. While we had been working on these languages for some time, under normal circumstances they would have been launched a bit later. But we see Translate as an important tool to help people on the ground or for those seeking more information abroad. We launched with the caveat that the languages may not be optimized in all translation pairs, but we were happy to respond to a clear need.

Foundation: What (or who?) inspires you in your development work?

Hughes: I’m most inspired by personal stories of how translations can solve problems, like in emergencies, while traveling, or when communicating with relatives in another country. Every one reminds me why this matters and humanizes the big numbers we see every day. Next to that, the stories of failure (which are usually funny) remind me how far we still have to go.

Foundation: What's the next big breakthrough for Google Translate?

Hughes: Either neural nets, semantics, or both. Neural nets allow us to look more holistically at a sentence, rather than scanning linearly across chunks of words. Semantics—having some idea of meaning that carries across languages—will help fix a lot of the biggest mistakes. And combining the two, there’s active research on using neural nets to build semantic models.

Foundation: What does the future of data-driven innovation look like to you?

Hughes: Data innovation in the future continues to be smarter and more useful. For example, Google Now can nudge me to leave work early to get to an appointment at my kid’s school because there’s an accident on the freeway, without me ever having had to tell it anything. It’s useful and relevant information to me.

Foundation: What guidance do you have for new entrepreneurs and innovators in this space?

Hughes: I would echo Larry Page, our CEO: new innovators should be ambitious. At Google, we like to take moonshots. Pick hard problems, and in 5 or 10 years, people will be astounded and thank you for having solved them. There are still lots of those problems out there.