U.S. Chamber of Commerce Foundation / Are Charter Schools on the Chopping Block in NYC?

Are Charter Schools on the Chopping Block in NYC? 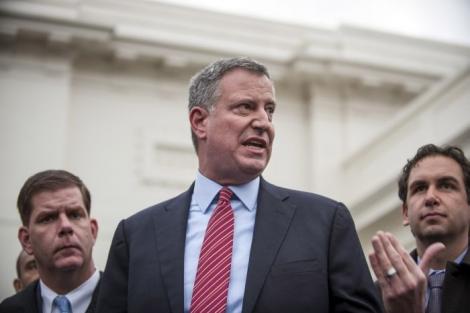 Bill de Blasio’s ascent to the New York City mayor’s office was fueled by the liberal councilman’s promise to tackle inequality in the city. But in at least one respect, de Blasio’s agenda could result in the rolling back of one powerful tool for increasing opportunity—the city's charter schools.

Over the last decade, the Big Apple has emerged as a leader in the school choice movement. Thanks in part to strong support from former Mayor Michael Bloomberg, New York’s charter schools, which receive public support but are privately managed, grew more than tenfold from 17 in 2002 to 183 in 2013.

In a 2012 U.S. Conference of Mayors speech on education reform, Bloomberg explained that his support for charters schools and school choice was rooted in giving parents “options” for educating their children.

“Parents and students both deserve that,” Bloomberg said. “And school choice is an important way to hold schools accountable for success because when people vote with their feet, you know that it’s real and it’s pretty obvious which direction they are going.”

But de Blasio looks prepared to break from the model of his more pragmatic predecessor, pledging to slow the growth of charter schools in the city.

“I simply wouldn’t favor charters the way Mayor Bloomberg did because, in the end, our city rises or falls on our traditional public schools,” de Blasio said in an October debate, shortly before he was elected in a landslide.

The new mayor’s discouraging talk has raised concerns among education reformers, who have pointed to Bloomberg’s approach to education as a potential model for other cities.

“School reform in New York is still a work in progress, but Mr. de Blasio seems to side with those who want to scrap Mr. Bloomberg’s efforts rather than build on them,” a Jan. 3 Washington Post editorial notes. “Of all the ways to reduce inequality, none is more important than giving poor children access to good schools — including, but not limited to, pre-K. And of all the political forces that propelled Mr. de Blasio into office, none is less truly progressive than the backlash against school reform.”

Marcus Winters, an education scholar at the University of Colorado at Colorado Springs, says that while the popularity of charter schools among parents will help to protect existing charters, the greater threat is that de Blasio could stymie the developing movement.

“There’s little danger that the next mayor could force charters out of Gotham any time soon; the schools have gained powerful political constituencies among parents seeking educational alternatives, and they’re backed by well-financed groups and individuals across the city and the nation,” Winters writes in the Manhattan Institute’s City Journal. “But a new administration hostile to charters could impede their progress and diminish their promise. Alternatively, a supportive mayor could expand the model and help kids across the city.”

Indeed, the new mayor faces limits in what he can do to stop charter schools, since the state legislature sets the number of charter schools allowed in the city. And as Winters notes, charter schools are, in fact, extraordinarily popular with parents, and demand is high in New York City: last year, 69,000 families applied for just 18,600 slots.

But there are moves the new mayor can make to slow their growth. In Bloomberg’s New York, many charter schools have been “co-located” in unused space in existing public schools, which allows them to save on utilities, janitorial services and other costs. DeBlasio has proposed charging rent to co-located charter schools, which many proponents say would hurt the growth of new charters.

DeBlasio’s anti-charter school message should serve as a dark reminder to school reform proponents that the effort to expand school choice and improve student outcomes is bound to meet stiff resistance from those seeking to protect the status quo. A similar dynamic is at work in the ongoing effort to organize charter school employees’ into teachers unions, a movement that began picking up steam in 2013.

What might sway de Blasio toward greater openness to school choice? Perhaps the new mayor should talk to some of the New York parents who have placed their children’s names on the city’s charter school waiting list, which now numbers an estimated 50,000.

Or perhaps de Blasio could consult with the man who swore him into office, former President Bill Clinton, who has been an enthusiastic supporter of charter schools both as president and in his post-presidency. Receiving a lifetime achievement award from the National Alliance for Public Charter Schools in 2011, Clinton offered words of encouragement to school choice supporters: “You’ve got to keep this country in the change business.”

It remains to be seen whether de Blasio will decide to keep New York schools in the change business—but observers agree the early signs are less than encouraging.

David Kinkade is a freelance writer.

This story originally appeared on the U.S. Chamber of Commerce website.