It’s time we peeled back the curtain on the forces shaping the global landscape. Drawing on a wealth of data gathered by experts, we can draw from the charts presented here key lessons for plotting America’s role in this new order. The stories they tell provide important context for America’s policies and programs, diplomacy, economic and commercial engagement, and innovation. If the United States and our firms are to find success in an increasingly complex and highly integrated world, we must adjust to these winds of change.

By the end of the century, Asia and Africa will account for over 80 percent of the world population, with far reaching implications for the global economy.The demographic trends bespeak a driving need for U.S. commercial and economic engagement with these regions and to gain access to high-growth markets. 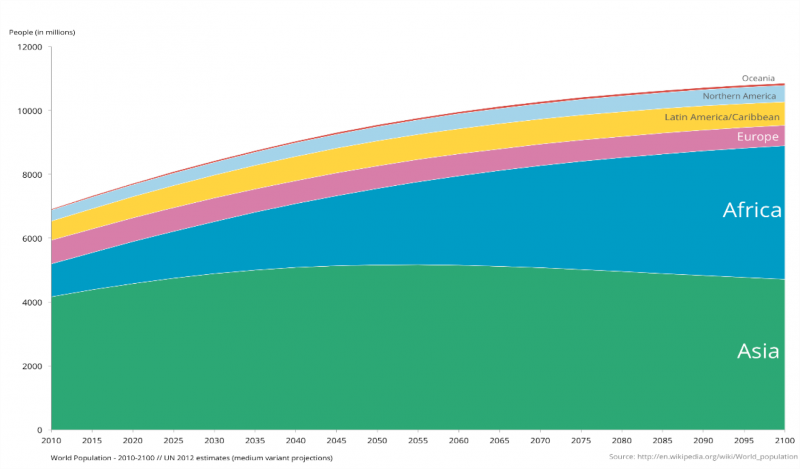 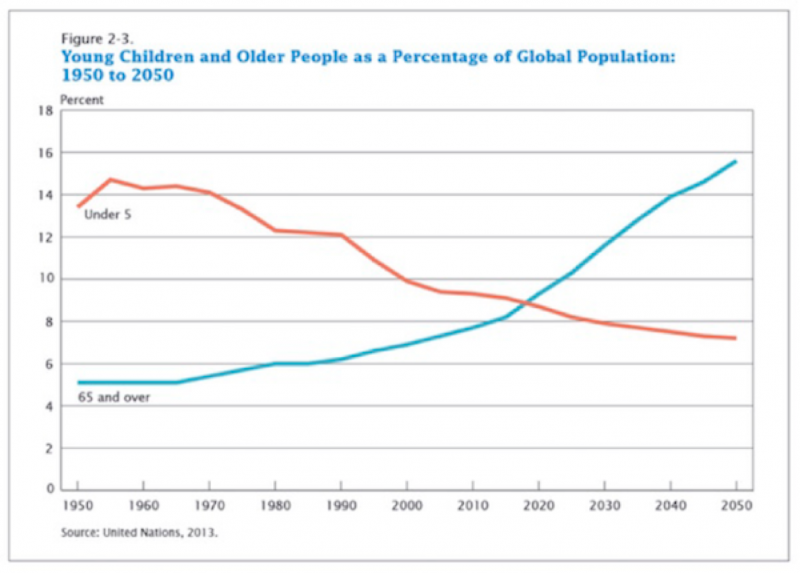 The chart above shows the rapid aging of the global population, pointing to the kind of goods and services that will be in highest demand, such as in health care solutions. Fortunately, America leads the world in the sort of medical innovations that will boom with aging populations. 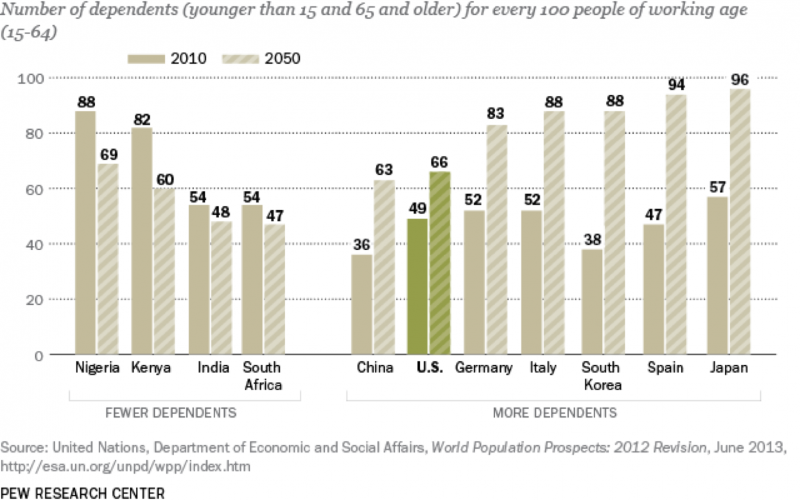 The chart above depicts a significant youth bulge emerging in Africa and India (that will be paced by certain areas of the Middle East). These findings point to where tackling youth employment and providing better governance will be vital in forfending conflict, insurgency, and instability fanned by restive youth. The chart further depicts an aging United States that will have far reaching implication for our workforce, pension system, and social structures.

The global population’s flight into urban areas points to the unique needs and challenges of city dwellers that will need to be fulfilled. America’s firms must focus their unmatched innovative powers on creating the products, services, and solutions needed to meet urban demand. The course of helping improve life in teeming cities abroad can create jobs and national income at home. 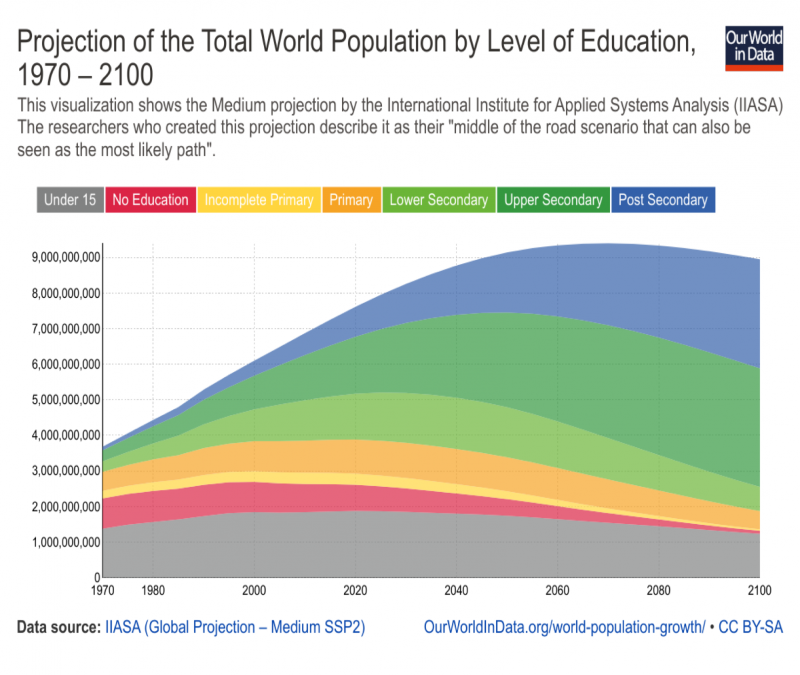 Along with growing more urban, the chart above shows that the global population is increasingly more educated. Each year, a greater number of people and higher percentage of the global population possess a secondary education. This trend places tremendous onus on governments to deliver the security, development, good governance, and opportunity that educated populations demand. Success in this mission will have much to say about the prospects for a peaceful and stable world order in the decades ahead or, alternatively, a much darker global future. Whether it will be vibrant markets or violent hotspots, this reality should compel America to modernize its global engagement to help foster good outcomes. Progress in this mission is not just a humanitarian imperative—it is a compelling matter of national self-interest. In a globalized world, our children’s prosperity and security will be directly affected for better or worse by conditions abroad. 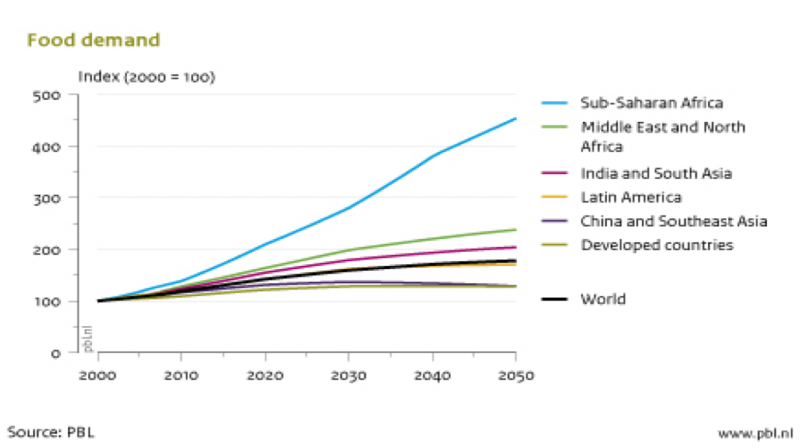 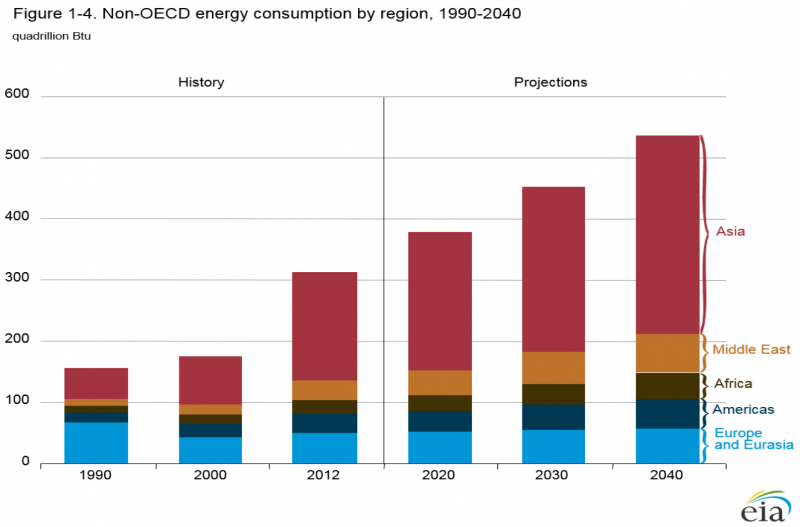 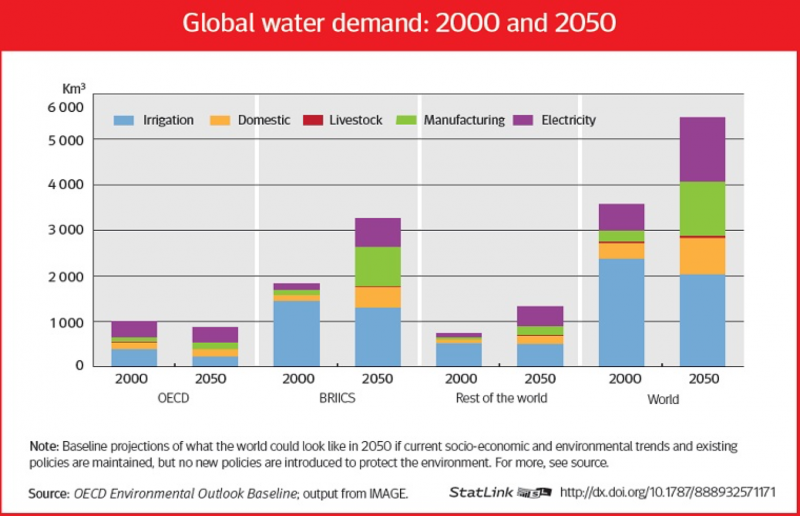 The charts above depict the sharp rise in demand between now and mid-century for three of the most basic (and interrelated) requirements of a growing, better educated population: water, food, and energy. The data show that the need for all three is on the rise most sharply where resources are scarcest and societies most fragile. Securing supplies to sustainably meet skyrocketing demand is the number one global economic and security imperative. For America, which leads the world in know-how, productivity, and innovation in all three categories, it offers unprecedented leadership and commercial opportunity. 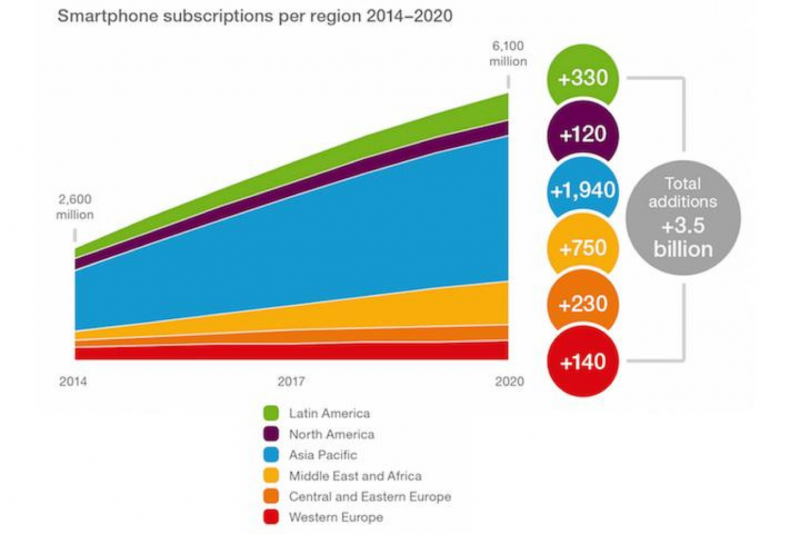 In just the next 6 years, some 3.5 billion smartphone subscriptions will come on line worldwide. The data speak volumes about how the world population will access information and engage the world commercially, socially, and politically in the decades ahead. The empowerment created by computers in the hands of billions of people across the globe will exert enormous pressure on governments, private enterprise, and civil society to meet public needs and expectations. To be successful, institutions in every sector of society will be required to operate more capably, securely, and agilely in the cyber-commons.

The IT revolution and its progeny, big data and the Internet of Everything—technologies conceived and led by America ingenuity—are changing the planet, driving produce enormous economic and social change. The chart above could not shout louder about the national imperative to strengthen our innovation ecosystem’s capacities to pioneer new IT wonders that marvel and satisfy the needs of a massive global market. 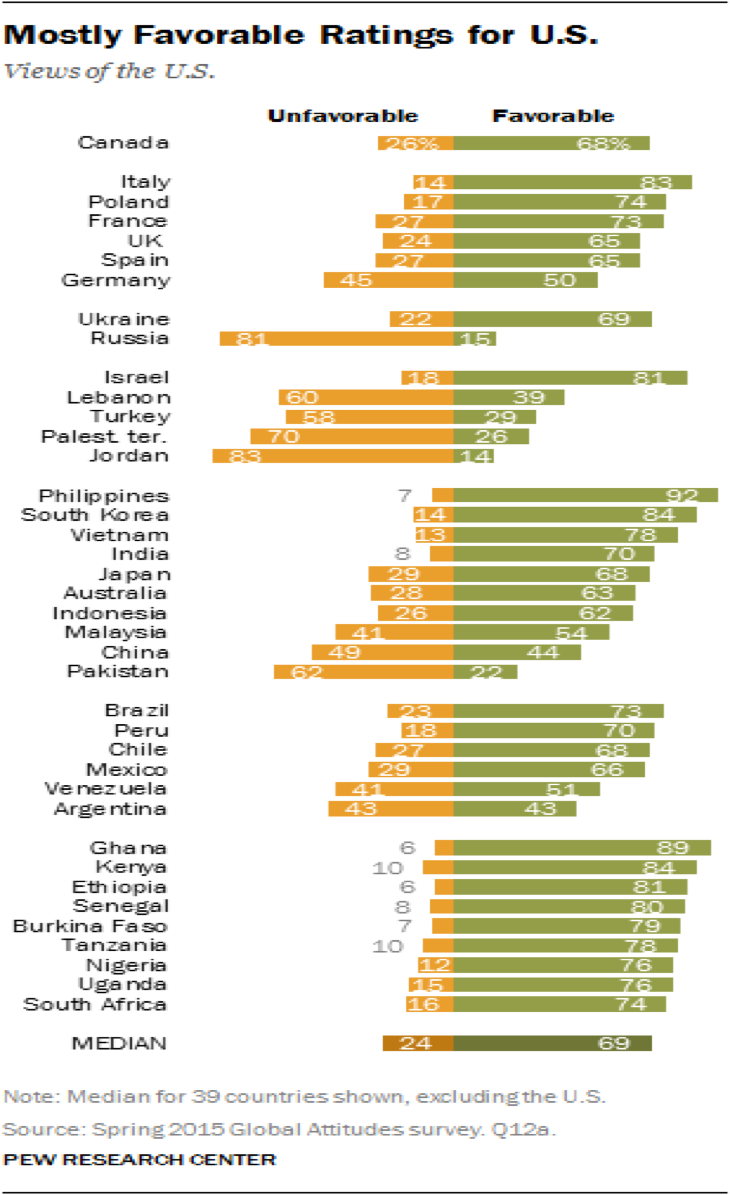 For those who believe that national retreat from the world is justified by a global population that disdains America, think again. With only a few exceptions, the United States is viewed favorably by the majority of populations across the globe. This goodwill is a tremendous economic and geo-political asset, one we must nurture through increased global engagement, including by our business sector. Commercial diplomacy is an extremely powerful and influential tool that America can use far more deftly and effectively. Doing so demands much higher levels of public-private sector partnership and cooperation.

Joining the favorable public opinion we enjoy, American brands dominate the competition. U.S. companies figure prominently among the top global brands. No other country comes close. Who exactly are we afraid to compete with for markets anywhere, at any time? 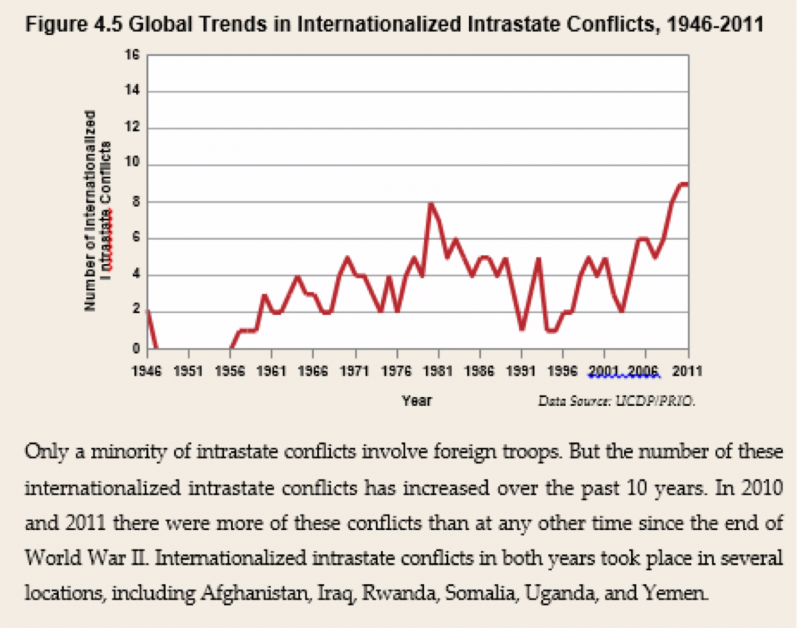 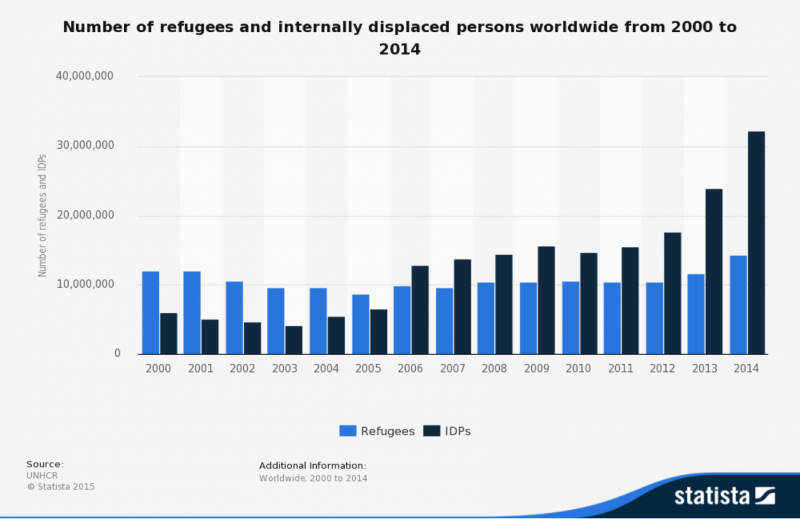 Despite the hopeful trends and opportunities that favor a purposeful and well-prepared America, armed conflict, international terrorism, and regional instability keep the world on spoiler alert. While interstate conflict is in a period of decline, we are also seeing a steady increase in intra-state conflict across the globe. This trend is responsible for the rising tide of refugees and migration roiling both the developing and developed world. Local and regional conflict can swiftly turn hopeful markets into expanding security hotspots exerting global impact, including right here at home. The world needs America’s diplomatic, military, and humanitarian strength and strong alliances now more than ever.

As 2016 draws to a close, a new administration and Congress will prepare to take the reins of power. They, along with business and civil society leaders, will look to the future with a strategic eye. What’s clear is that seizing the opportunities and meeting the challenges implied by the distinct trends and factors featured in this post will require America to function at its very best to help model and promote the security, development, and good governance rooted in the rule of law that is the foundation of national and global progress.

We must perceive change and prepare wisely as if our future depends upon it—because it does.  But we are well suited to the challenge. Despite our shortcomings, America has the best governance, firms, non-profits, and civil institutions on earth. The answer is engagement, not retreat. If we employ our resources purposefully and skillfully, no challenge will prove too great. At our best, the future can be very bright indeed.