15 Years of Aviation Education and Innovation 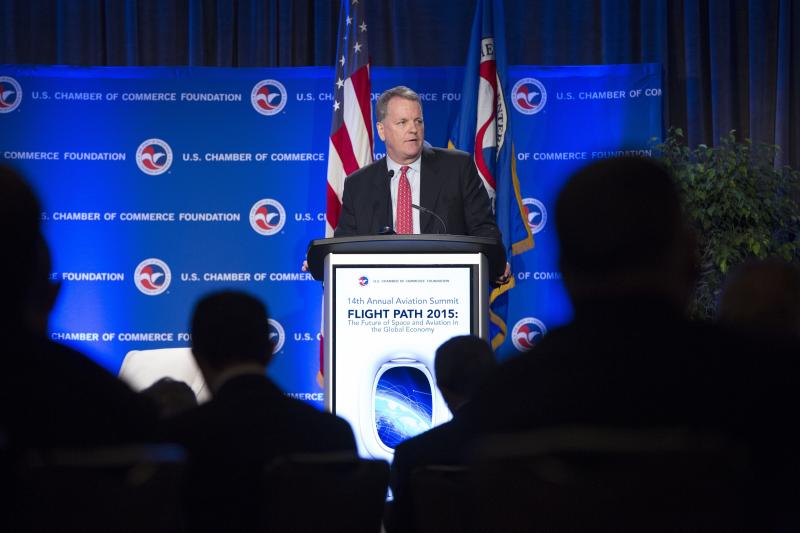 For the past 15 years, the U.S. Chamber and U.S. Chamber Foundation have hosted a major summit featuring leaders from the aviation and space industries.

The annual Aviation Summit has grown to be an essential gathering for those looking to get the latest on news and trends in aviation, and a place to celebrate and honor those who have dedicated their life to flight.

Like the aviation industry, the event has evolved over the years with new discussions and new faces. And it’s expanded, from a partial day forum held at the U.S. Chamber headquarters to an all-day event in one of Washington’s largest venues.

The 2016 summit is on March 22 at the Renaissance Downtown hotel in Washington, D.C. This year’s summit is expected to be the biggest yet, with more than four dozen scheduled speakers.

“There are people who don’t get to come to D.C. all the time, but they all come in for this,” said Jean Media, senior vice president with Airlines for America.

What are some of the top issues that have consistently come up year after year?

Dozens of major companies and organizations have been frequent attendees, including Boeing, American Airlines, Lufthansa, Rolls-Royce North America, Rockwell Collins, Airlines for America, FAA, NASA, and many others.

But there has always been a new wrinkle.

Fifteen years ago would anyone have predicted the resurgence of the aviation industry, after years of consolidation and uncertainty?

“Our success is part of a renaissance in the US airlines industry, that many of us have worked hard to implement over the last decade,” said American Airlines CEO Doug Parker last year. “Indeed, after 35 years of post-deregulation hard work, the US airline industry is starting to look like the US airline business.”

Who would have predicted that the 2014 summit would feature Virgin Group founder Sir Richard Branson discussing not his airline, but plans for Virgin Galactic and the first commercial space flight? (He also told us what he carried in his handbag.)

One frequent topic of discussion has been the broader global economy and its impact on aviation. This was particularly true for several years following the struggles of the financial sector.

“We’re in a business that innovates,” said now-retired Boeing Chairman W. James McNerney, during remarks at the 2013 summit. “I’m tempted to say that the country is happy to have the aerospace industry. It does represent, I think, the best of our country and I am proud to be part of it.”

The Aviation Summit has also historically been a place where aviation executives and government leaders have taken a hard look at the need for investment America’s infrastructure.

“We should have the best infrastructure system in world so that we can compete and create the jobs that the American people demand,” said Rep. Bill Shuster, Chairman House Transportation & Infrastructure Committee, in an interview at the 2015 summit.

Carol B. Hallett, who serves as Of Counsel to the U.S. Chamber of Commerce and hosts the event, noted last year that 2015 summit “touched on so many issues that I could hardly digest it all.”

The Aviation Summit has always been about education, but also celebration. Each year, the summit has honored one person with the Carol B. Hallett Award for lifetime contributions to the aviation industry. Past recipients include former Continental Airlines CEO Gordon Bethune, FedEx Chairman Fred Smith, and former Cessna Aircraft Chairman Russ Meyer.

“The airline industry has taken smart risks, pursued innovations, and continued to push through the outer limits of what we can achieve,” Hallett said in 2015. “And that’s how we continue to move aviation forward, even when we don’t know precisely what lies on the horizon.”