Amazon Pushes for Commerical Drone Use 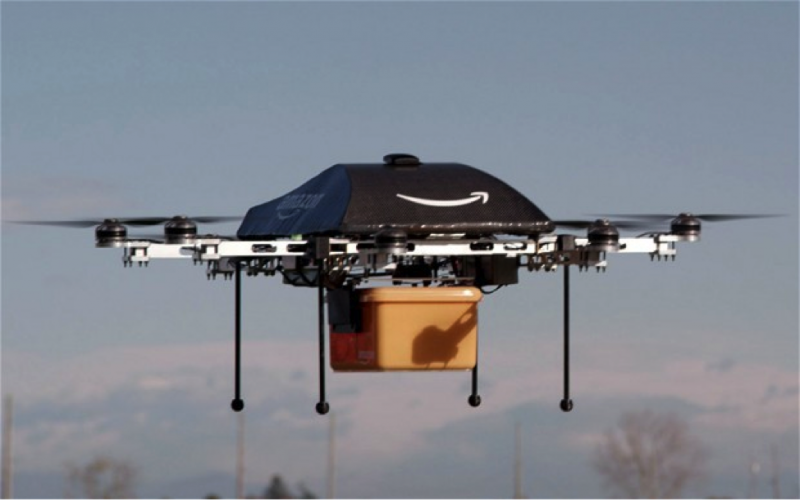 Could a drone like this one deliver packages in 30 minutes or less?

As accelerating change and technological innovation become widely embraced all over the world, the creation of disruptive technologies has been rapidly increasing. Jeff Bezos, the founder and CEO of Amazon, announced in December of 2013 that Amazon is developing a drone delivery system that will allow for lightweight commercial packages to be delivered by an Unmanned Aerial Vehicle (UAV) within 30 minutes.

These drones, or octocopters, have an expected delivery range of ten miles from any of Amazon’s distribution centers and can reach a top flight speed of fifty miles per hour. The weight capacity for a package is five pounds; 86% of Amazon’s current deliveries are under this limit. The drone weighs 12 pounds and is powered by a four pound battery and eight separate blades that can function even if one of the blades breaks.

After filing for a patent in 2013, the U.S. Patent and Trademark office granted Amazon a patent for its drone delivery system in April of 2015. The patent reveals the detailed lay out of how the delivery 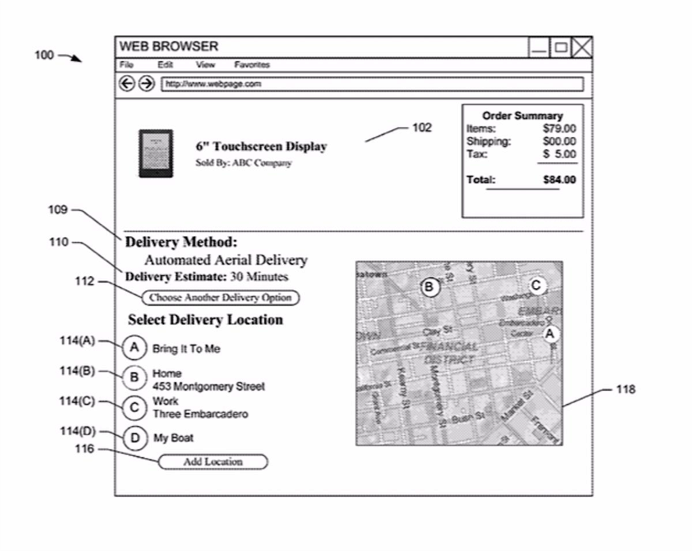 system will operate. Some of the key details include communication between drones, autonomously rerouting for safer travels, constant monitoring for humans or animals, and a variety of delivery options for customers. In the Detailed Description section of the Patent it states, "Other UVAs may provide information regarding weather (e.g., wind, snow, rain), landing conditions, traffic, etc. The UAV may utilize this information to plan the route from the source location to the delivery location."

Amazon envisions its drones being able to deliver packages to wherever the customer is at the moment, not just home deliveries. The delivery preference would be selected by the customer upon checkout as the choices may include home, work, and even a boat. An option called “Bring It To Me.” is described in the patent application by using GPS data from the customer’s mobile device. The drone can locate and deliver the package to the GPS location; this would allow consumers to place orders and not have to stay in the same place as they wait.

The implementation of drones in the supply chain is anticipated to efficiently drive down delivery costs. The 30-minute-or-less delivery will be priced at $1, which signifies a cost reduction in Amazon’s operational systems and thus a lower price for consumers.

Too Good to Be True?

Amazon’s drone delivery system is perceived to have various benefits, but many others doubt its success. When released, Amazon Prime Air was immediately met with skepticism and disbelief of concept. Criticism emanated from many perceived obstacles such as the Federal Aviation Administration (FAA) and other regulatory approval, public safety, hackers, weather, reliability, pilot operation, and logistical challenges.

Safety is one of the primary concerns regarding the drone delivery system as the intelligence of these robotic vehicles is constantly questioned. Specialists claim there isn’t sufficient technology available at this time that can ensure drones won’t crash into humans.

Hackers present another danger with the idea of drone delivery because drones are an extremely easy target. Researchers at the University of Texas recently hacked a drone using a store-bought GPS system. Noel Sharkey, the co-founder of the International Committee for Robot Arms Control, said that using a technique called “spoofing” hackers can mislead drones to mistake a new signal for those of the GPS satellites in which they are routed for, causing the drone to track the hacker’s signal instead of the original one. In an interview with BBC News, Sharkey Stated "It's very dangerous - if a drone is being directed somewhere using its GPS, [a spoofer] can make it think it's somewhere else and make it crash into a building, or crash somewhere else, or just steal it and fill it with explosives and direct somewhere”. 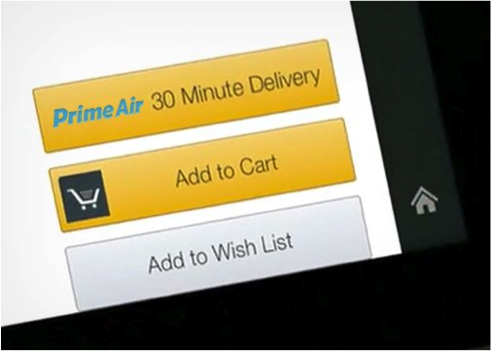 Another factor that Amazon might want to consider when developing its delivery system is theft. What prevents civilians from walking outside their house with their gun in hand and shooting down every drone that flies by? This question, along with many others that critics are asking, is something that Amazon will need to explore before any of these drones will be deployed.

In March of 2015, the FAA granted Amazon an experimental airworthiness certificate for its drones which enables it to begin conducting test flights. The regulations for this permit include daytime flight only, a 400 feet elevation limit, and the drone must be within the line of sight of a trained and licensed pilot. The certification also requires Amazon to send the FAA monthly data regarding its flight tests and research gathered.

The FAA’s certificate can be viewed as either a positive or negative influence on the feasibility of the drone delivery system. Though this allows Amazon to legally begin testing their drones, it implements strict regulations that the FAA may not be changing anytime soon. Amazon envisions its drones to be autonomously operated with minimal pilot operation when needed; therefor the line of site visibility rule may cause complication for Amazon in the future. It would also increase the operating cost of a drone and Amazon, like any company is interested in keeping those operating costs as low as possible.

One commonly discussed concern is the disruptiveness of this technology in regards to the private sector - postal service companies such as UPS and FedEx. Many skeptics believe that Amazon Prime Air could put an incredible amount of people out of jobs; though others view it may be beneficial for these companies. Amazon could be paving the way in the regulatory scheme and shaping the drone delivery service as both UPS and FedEx have already begun working on their own drone delivery systems.

Amazon planned to have their drones delivering packages by 2015, dependent on the FAA, but because commercial use is still prohibited Amazon’s vision will be further delayed. Some analysts say that drone delivery won’t be feasible until 2020; others proclaim it could be much later. Regardless of when Amazon Prime Air will be available for consumers, it is definite that steps towards further operation of autonomous vehicles are being made and technological innovation is changing society all over the world.