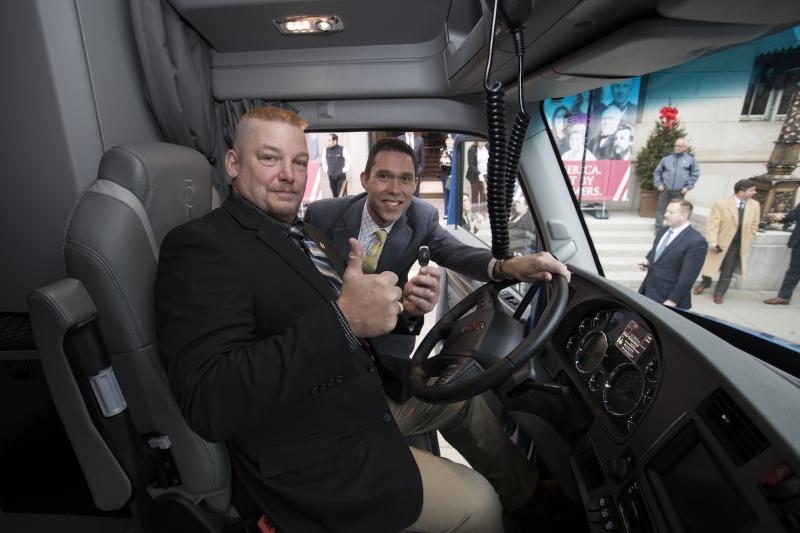 Tweet Facebook
On Friday, Dec. 15, 2017 Softy was named the winner of the 2017 Transition Trucking: Driving For Excellence award.

Transitioning from military service to civilian employment can be a daunting prospect, but U.S. Army veteran Gregg Softy didn’t let a non-traditional career move hold him back from pursuing his passion. Softy's decision to chase a lifelong dream has now paid off in the launch of his own business.

On Friday, Dec. 15, 2017 Softy was named the winner of the 2017 Transition Trucking: Driving For Excellence award. Softy was also presented the keys to a fully loaded T680 Advantage Kenworth truck, catapulting his driver status to a brand-new Owner-Operator.

“This is a life changer,” said Softy. “Given that we’re a little older getting out of the military, we were on an accelerated timeline and this is certainly a giant step forward to where my business partner and I want to be.”

“Following a distinguished military career, Gregg leveraged his skills to successfully launch a second career in the trucking industry,” said Eric Eversole, president of Hiring Our Heroes and vice president at the U.S. Chamber of Commerce. “We are honored to play a role in helping Gregg find a meaningful employment opportunity and congratulate him for winning this year's award.”

Graduating from the U.S. Military Academy at West Point, Softy went on to a successful Army career leading and mentoring soldiers. After 28 years of distinguished service and earning a Master of Business Administration from Webster University, Softy was eager for a change. With the encouragement of his wife and his goals set on one day growing a business, Softy made the leap to an entirely new field.

Softy has partnered with a fellow soldier whom he served with at Fort Hood, TX and together they have goals of expanding their business, while also advancing the careers of other aspiring drivers.

“Our plan all along was to build our own fleet, hire veterans and work with veterans; a veteran owned, veteran operated company,” said Softy “This certainly sets us in the right direction and [gives] the ability for us to help veterans and over the course of the next year, tell our story and maybe inspire an employer to hire a veteran. That is almost as important as winning the truck.” Launched in 2016 and presented by Hiring Our Heroes together with Kenworth Trucking and FASTPORT, the Transition Trucking: Driving for Excellence award highlights a larger effort to create immediate jobs for transitioning military personnel and inspires companies to hire more veterans, National Guard members, and reservists into the trucking industry.

"Congratulations to Gregg Softy for his selection as the winner of the Transition Trucking: Driving for Excellence award," said Kurt Swihart, Kenworth marketing director. "We are honored with this opportunity to thank him for his years of service as a Lieutenant Colonel in the United States Army and his dedication to become an inspiration to other professional drivers in our industry. We are confident that the Kenworth T680 Advantage will help him get on the right road to continue his promising career in trucking."

"The successes displayed by each Transition Trucking finalist in the trucking industry can be tied some way back to their military training. This gives us even more evidence that the military hardwires our veterans to excel in trucking, and industry-leading companies are uniting to attract and employ these remarkable candidates," said Brad Bentley, president of FASTPORT. "A special congratulations to Gregg as well as Wayne and Daniel who have set incredible examples of what veterans can accomplish after they transition from the military into civilian careers."

Softy was selected from a competitive field of nominees. Joining him as finalists were: U.S. Navy veteran Daniel Shonebarger of Columbus, Georgia and U.S. Marine Corps veteran Wayne Roy of Pittsfield, Massachusetts, who each received $10,000 as runners up.

Click here for more information or to nominate a veteran for the 2018 award.