Do technology and automation kill jobs? Or just the reverse?

One of the most alarming trends of the last decade was the precipitous drop in U.S. labor force participation. The decline in the number of employed prime-age men, between the ages of 25 and 54, was especially striking. Five years after the financial crisis began, many analysts considered the possibility that millions of men had permanently left the workforce.

Alarm bells went off. Such a large-scale exit from work would surely cause cascades of wrenching economic and social change – slower economic growth, ballooning budget deficits, and declining health for individuals, families, and communities. Or perhaps this trend was a reflection of poorly understood technological or cultural changes already well underway.

A prominent explanation that continues to gain steam is the idea that automation and technological dislocation caused the anti-employment trend. Worse still, this theory holds, robots, artificial intelligence, and other technologies are advancing faster than ever and could eliminate 20-40 percent of all human jobs over the coming two decades [See, for example, Labor 2030: The Collision of Demographics, Automation and Inequality; Future of Jobs and Its Implications on Indian Higher Education; and The Future of Employment: How Susceptible Are Jobs to Computerisation?]. This job-destroying-robot narrative sure is popular, and it’s leading to some radical policy proposals, like a Universal Basic Income (UBI). But is it true? 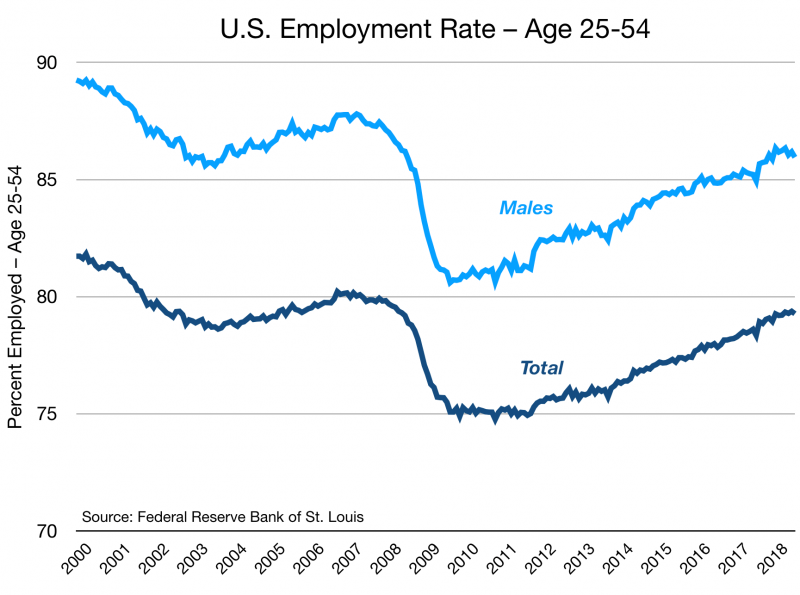 New economic data and word from the front lines of the American economy suggest this pessimistic story is wildly oversold. “America has a massive shortage of truck drivers,” we learn from the Washington Post. “Joyce Brenny, head of Brenny Transportation in Minnesota, increased driver pay 15 percent this year to try to attract more drivers. Many of her drivers now earn $80,000, she says, yet she still can't find enough people for the job.” This is ironic because self-driving trucks are the most prominent culprit in the supposed coming wave of technological disemployment. But as the latest employment figures show (see chart above), 10 years after the financial crisis, the percentages of employed Americans are nearing the pre-crisis levels.

Autonomous driving technologies are sure to revolutionize trucking, but the overall employment effects are far from certain. And for now, the market for human-driven trucks is booming. “Fleets ordered 42,200 trucks in June, more than double the number they bought in the same month a year ago,” the Wall Street Journal reports. “We’re expecting in June that the backlog will rise to a level we haven’t seen since about 1999,” Kenny Vieth, president of Columbus, Ind.-based ACT, told the Journal’s Jennifer Smith. “The backlog-to-build ratio was about 9.6 months at the end of May, he said, meaning most trucks ordered in June won’t arrive until the first half of 2019.”

Meanwhile, according to Bloomberg, “Shale Country Is Out of Workers and Dangling 100% Pay Hikes.” “The oil industry has such a ferocious appetite for workers,” reports David Wethe, “that it’ll hire just about anyone with the most basic skills. ‘It is crazy,’ said Jazmin Jimenez, 24, who zipped through a two-week training program at New Mexico Junior College in Hobbs, about 100 miles north of Midland, and was hired by Chevron Corp. as a well-pump checker.”

Yes, technology is making oil fields far more productive and eliminating many repetitive and dangerous tasks. (These energy technology gains are so powerful they are also rearranging the geostrategic map in America’s favor.) But these two stories – of productivity-induced job displacement and job growth – can be true at the same time. In fact, in healthy economies, they are exactly what leads to overall growth in incomes and living standards.

Amazon, for example, is one of the world’s most aggressive users of robots. It is also the most explosive job creator in the U.S. In just the last few years, Amazon has deployed thousands of robots in its advanced distribution centers and at the same time added hundreds of thousands of human jobs. As Michael Mandel has shown, it is precisely these huge productivity gains that fuel the growth of new industries and thus create new, higher-paying jobs.

Two new books argue that the labor markets are so broken that we need a Universal Basic Income – payments to nearly every adult American of $1,000 per month regardless of need. In The War on Normal People: The Truth About America's Disappearing Jobs and Why Universal Basic Income Is Our Future, technology investor Andrew Yang argues explicitly that robots and A.I. are the cause of recent job losses and portend an even worse employment winter in coming years. Give People Money, by Annie Lowery of The Atlantic, also urges a UBI, but hers is a far more nuanced case, and she’s skeptical of the robots-as-villains argument.

If it replaced the current maze of safety net programs with cash transfers, a UBI could potentially simplify the system. It could remove the health care distortions of Medicaid, for example, and also reduce the current system’s high effective marginal tax rates, which discourage work. The idea that a UBI is urgently needed to combat a tech-driven employment catastrophe, however, is unsupported by a labor market that is now recovering nicely from the post-crash doldrums.

The assertion of widespread technological disemployment is inconsistent with the productivity slump of the last dozen years. If technology were stealing jobs on a broad scale, we should have seen broad productivity gains. Instead, slow growth and a lack of productivity and innovation in too many industries were the real culprits behind the employment slump. In other words, the real problem was too little technology and not enough dynamism. We need more robots, A.I., blockchains, mobile Internet services and other automating technologies to give workers better tools to do new, creative tasks. The trick is to build new products and services for new industries that grow faster than they displace older tasks.

Technological dislocation is inevitable. In fact, it is a hallmark of a dynamic economy. Without robust economic growth, however, there is no cushion for these dislocations. More rapid economic growth will entice discouraged workers back into the fold and promote geographic and industry mobility. No doubt, we should remove barriers to employment and seek creative solutions for hard-hit communities. It would be a mistake, however, to enact radical new employment policies, based on an overly pessimistic view of the broader economy, just as we appear to be shifting into a higher gear.