U.S. Chamber of Commerce Foundation / Child Care an Issue for Not Only Parents, But Employers
General Foundation
July 24, 2017

Child Care an Issue for Not Only Parents, But Employers 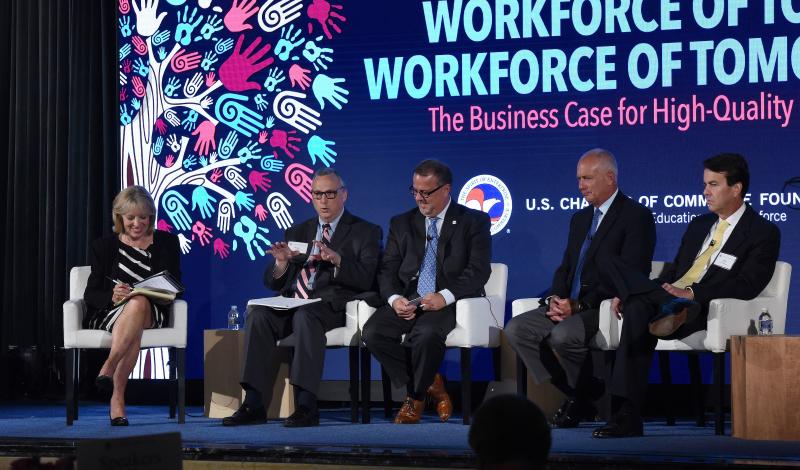 Doug Luciani of TraverseConnect (2nd from left), speaks at the Workforce of Today, Workforce of Tomorrow event.
© Olivier Douliery for the U.S. Chamber of Commerce.

Today’s business leaders and policy makers recognize that investments early on in a child’s life  pay big dividends in the near- and long-term.  Rather than asking, “Why does it matter?” they’re asking, “How can we do this?”

Actually, not much has changed, at least not dramatically. Rather  the steady, incremental shifts over time are finally tipping the balance in favor of early child development initiatives.

In 1967, Life Magazine ran a cover story showing a baby crib with the caption, “Early Learning Right in the Crib,” challenging the myth that a child’s intelligence and physical development are fixed from birth. Then, in the early 1970s, Congress passed legislation to create universal child care. But, President Nixon vetoed the bill, and subsequent efforts at the federal level have not even come close to implementing the reforms envisioned.

Then, in 2003, new research from the Federal Reserve Bank of Minneapolis outlined the long-term economic development benefits of early childhood development. It demonstrated that for disadvantaged children, participation on quality early learning programs can result in returns on investment of up to $16 for every $1 invested. The report was followed by a policy proposal in 2005 that made the case for “a private/public endowment that would fund early childhood development scholarships for all at-risk children.”  The Fed, backed by the Business Roundtable and other business organizations, understood that developing children in their earliest years was critical if the U.S. was to remain competitive with other nations.

Participation on quality early learning programs can result in returns on investment of up to $16 for every $1 invested.

That same year, Michigan established the Early Childhood Investment Corporation to focus state resources on this critical need.  Unfortunately, a crippling recession made major new investments all but impossible.

However, Michigan’s current Governor, Rick Snyder, has not only kept the program intact, but significantly increased spending on pre-school for four-year-olds, child care subsidies and other early childhood programs.  His initiatives are supported by conservative House and Senate majorities, and by business leaders and organizations.

In April, I co-authored an op-ed in Bridge Magazine and Crain’s Detroit Business making the case “Child care isn’t just a parental issue, it’s a concern for employers too.”  I was joined by peers at the Small Business Association of Michigan and Grand Rapids-based Talent 2025.

We cited a Talent 2025 study showing “the three biggest barriers to workforce participation [in Michigan] for families with modest incomes are poor access to reliable transportation, inadequate job skills, and lack of affordable child care.”  It continued: “Without improvements to our child care system – including streamlining onerous regulation for child care providers – the effect on Michigan’s economy will be ‘devastating’.”

We also cited research from Katherine Stevens from the American Enterprise Institute, dovetailing with her paper released in June by the US Chamber of Commerce Foundation titled, "Workforce of Today, Workforce of Tomorrow: The Business Case for High-Quality Childcare."  It draws on the science and research on brain development in young children to demonstrate irrefutable relationships between a child’s early development and the ability to learn and to be successful in later life stages.

For business, such evidence is timely and compelling.  Michigan is not unique in its severe labor shortage.  With more than 150,000 unfilled jobs in Michigan. Gov. Snyder cites the need to attract more than 70,000 new residents to help fill critical jobs. His latest budget funds early child development, STEM programs, and vocational programs to tackle the shortfall.

Michigan is not unique in its severe labor shortage.  With more than 150,000 unfilled jobs in Michigan. Gov Rick Snyder cites the need to attract more than 70,000 new residents to help fill critical jobs. His latest budget funds early child development, STEM programs, and vocational programs to tackle the shortfall.

There are capable and willing workers sitting on the sidelines simply because they lack child care options. Crain’s Detroit Business estimates that greater access to affordable child care would “boost labor participation for women by 2 percent, or 43,000 workers in Michigan.”

The battle among states and countries is no longer just about attracting businesses.  It’s overwhelmingly focused on attracting talent.  While not the only factor, access to quality child care will be critical in determining how each region competes.