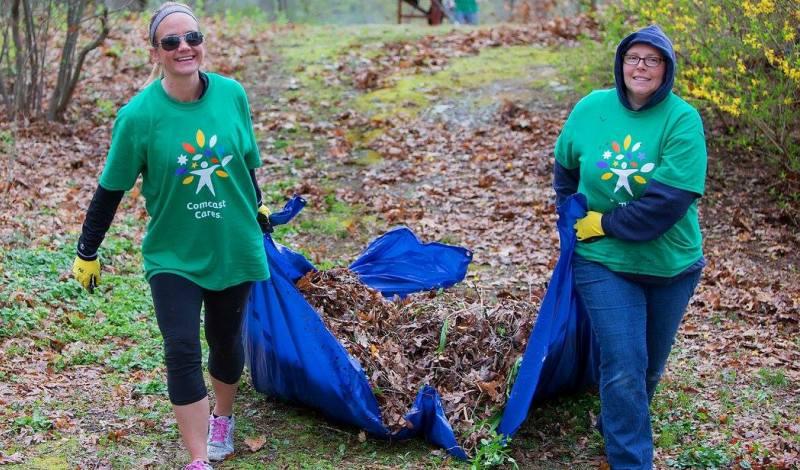 On Saturday, April 21, the 17th Comcast Cares Day surpassed one million volunteers who have participated in the annual celebration of the company’s year-round commitment to community service. More than 100,000 Comcast NBCUniversal employees and their families, friends, and community partners volunteered at 1,000 community improvement projects in about 20 countries.

Around the world, volunteers supported groups such as Boys & Girls Clubs of America, Big Brothers Big Sisters of America, City Year, The Arc, and Houston Food Bank, and elementary schools to improve their community. Projects also included revitalizing neighborhoods in California, Florida, and Texas that were impacted by recent disasters in 2017.

Check out some of the highlights from #ComcastCaresDay below!

We're are so proud to partner with Big Brothers Big Sisters of Metropolitan Detroit for the past 8 years of #comcastcaresday, with our Detroit team packing over 1,000 lbs of food for those in need! https://t.co/1TF7kg9V7P #comcastspotlight pic.twitter.com/ElOUYqMRye

Huge THANK YOU to 100+ volunteers from @comcast who visited MLAR for #ComcastCaresDay! They did an awesome job helping us care for our 60 acre property and our adoptable dogs loved making new friends - thank you so much for supporting our mission to help homeless animals! pic.twitter.com/qmfbGkQcSR

We’re proud to support #ComcastCaresDay and join the over 1 million volunteers since this annual day of volunteering began in 2001.@comcast pic.twitter.com/pZoheyMOfj

We appreciate @ComcastNBCUCI @ComcastBeltway as we bring another #ComcastCaresDay to a close. Thank you to all of our volunteers and @AmeriCorps members! pic.twitter.com/XUc04JT7FV

Hundreds of people, including NBC Bay Area staff, turned out for the Santa Rosa cleanup, as part of #ComcastCaresDay, putting a new face on a community ravaged by the massive North Bay wildfires six months ago. https://t.co/of7dCCV28X pic.twitter.com/nqUdSuDxfT

Thank you to all of the SRCS and Comcast volunteers who came out today for #ComcastCaresDay! You spruced up SRHS for graduation, planted hundreds of trees, and launched an Integrated Wellness Center for our fire-affected families. #srcstogether https://t.co/CF9UBrp2oG

Perfect weather for #ComcastCaresDay in Manchester! Today we worked on the raised bed gardens and began planting. The vegetables grown here benefit the programs at the New Hampshire Food Bank! pic.twitter.com/BrQM8UpayG

Honored to join the @ChildFamilyCT Child and Family Agency of Southeastern Connecticut and @TheArcNLC for Comcast Cares Day 2018, a national volunteer event. Great day investing in our community’s most important resource, our children #comcastcaresday #newlondon pic.twitter.com/jiN6fJGCOZ

Our Wang Y had special guests today at their #HealthyKidsDay! Thank you to @ComcastNBCUCI for volunteering today for #ComcastCaresDay. We appreciate all the commitment to service & supporting important programs at our Y’s that Comcast continues to be a part of with us. pic.twitter.com/cFOcpUjN1e