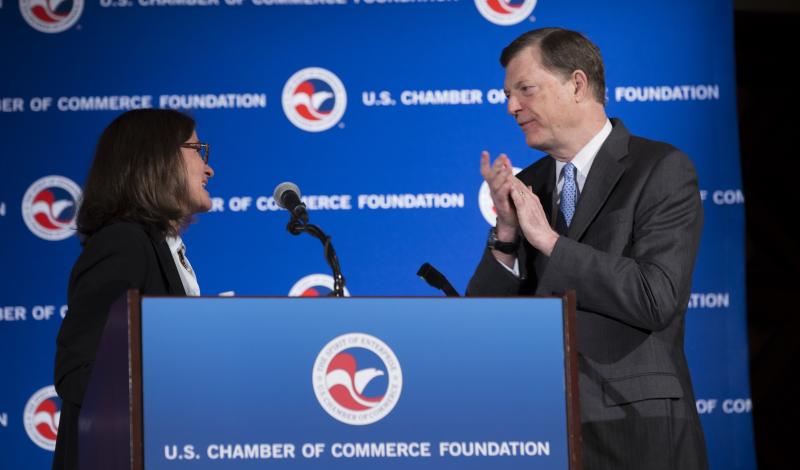 From designing cars that don’t crash to crafting the recipe for the perfect mac and cheese, data has the potential to be a major force for good.

The U.S. Chamber of Commerce Foundation touted the growing impact of data-driven innovation on Oct. 7, hosting speakers and panel discussions featuring leaders from the public and private sector. It also released a new research report on the topic.

Google, IBM, Toyota, Hilton and other companies talked about the numerous ways that data has proven useful to them and their customers. Other speakers pointed to data’s role in helping the less fortunate, while some spoke of data's promise while warning of privacy concerns.

“From collection to access, to technology and privacy, the implications of the growing and deepening availability and use of data impact all of us in some shape or fashion,” said U.S. Chamber of Commerce President John R. McKernan. "No one is left untouched by this environment as data literally permeates everything around us."

The Summit on the Future of Data-Driven Innovation marked the release of a research paper on the topic, featuring six chapters delving into the intersection of data, the economy and public policy.

Data as a Force For Good

There are more than 30,000 automobile accidents every year. To officials at Toyota, this is unacceptable, and the company is working on data-driven solutions to make cars increasingly safer.

“Our goal is to make cars that don’t crash,” said Hilary Cain, Director of Technology and Innovation, Government and Industry Sales for Toyota Motor Sales USA.

Other examples of data-driven innovation abound.

Roger Gordon, the owner of Food Cowboy, said his company is using data to re-route food that would otherwise be wasted to food banks.

“Food companies waste more food in 19 days than they donate to food banks all year,” he said. “But if you have enough data, no one is too small to matter.”

FTC Commissioner Julie Brill said it is a top priority of her agency to ensure private data is protected, and warned companies to be careful with the data they collect.

“The success of this sort of economy relies on protecting consumers from the risk to their privacy that big data can pose,” Brill said. “As businesses, you need to be concerned about losing your customers’ trust if the big data analytics on which you rely cannot handle consumers’ private information with sensitivity and respect.”

“If you want to think about protecting privacy, technology along is not likely to be sufficient. You need some coupling of privacy and policy,” said Marjory Blumenthal, Executive Director of the President’s Council of Advisors on Science and Technology.

One congressional staffer said members of Congress have individually expressed some concern over privacy and data, but there has been little legislative action, in part because there is a fear of doing more harm than good.

“The government has the ability to convene and foster best practices, rather than dictate standards that may make sense to a handful of politicians and will be out of date the moment they are signed into law,” said David Quinalty, a policy director for the U.S. Senate Commerce, Science and Technology Committee.

In 2011, a computer from IBM known as Watson won a $1 million prize on the popular trivia show Jeopardy! Since then, Watson has been used for a variety of commercial applications, including lung cancer treatments. Watson is now part of a major IBM business unit offering data-based solutions for a wide range of companies.

Dr. Robert Sutor, a vice president at IBM who helped develop Watson, offered the keynote speech and said that the ever-growing availability of data is raising the bar for what humans can strive for.

He used a popular comfort food to make a point, noting the growing availability of macaroni and cheese recipes on the Internet.

“It has probably raised the bar,” he said, “on how good macaroni and cheese has to be.”