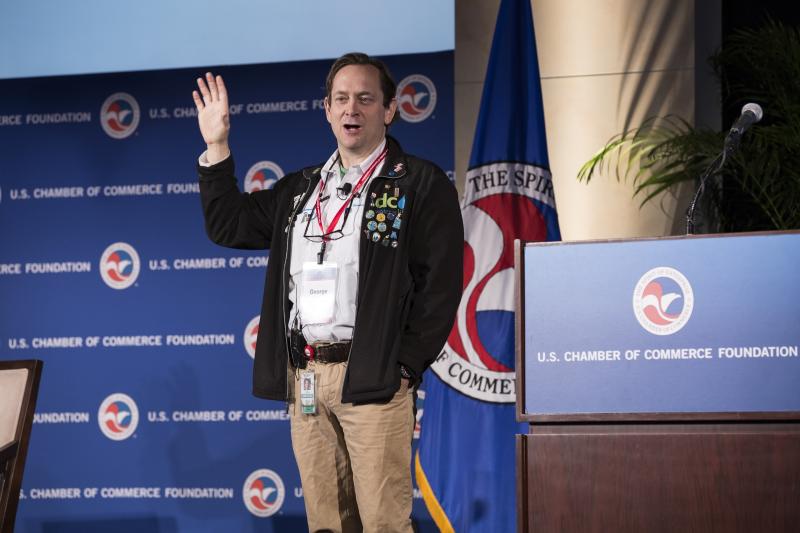 Tweet Facebook
DC Water is taking circular economy innovations and principles to the next level with new strategies.

George Hawkins, CEO and General Manager of the District of Columbia Water and Sewer Authority, stands on the front line of a challenge faced by water utilities across the country.  Unpredictable and extreme weather strains legacy water infrastructure designed to handle a fraction of the load – water supply, sewage and storm water – that system engineers envisioned. This is particularly true in Washington, where some existing infrastructure predates the Civil War.  While pipes crumble, financial resources to upgrade DC’s system are limited.

The magnitude of the challenge facing DC Water was on display during four intense storms that hit the city within a recent two-month period. In the capitol’s Bloomingdale neighborhood rains so inundated the storm water system that manhole covers popped upwards, water shot onto streets and residents’ basements filled with a mixture of rainwater and sewage.

Aged infrastructure urgently needs to be upgraded to ensure service to 672,000 DC area residents. Hawkins also needs to safeguard the symbiotic relationship that DC Water enjoys with the area’s energy companies. They’re his biggest customers and the source of the immense quantities of power that drive the utility’s sprawling systems.

All the while, the source of DC’s fresh water, the Potomac River, must be cared for with the return of clean water after use.

Hawkins outlined the challenges faced in operating this “original and most important recycling program” in his keynote address at the Chamber of Commerce Foundation’s “Mainstreaming the Circular Economy” event on May 16-17.

Hawkins sees opportunity to leverage circular economy concepts to generate revenue for infrastructure improvements while simultaneously reducing waste. Ultimately, he wants DC Water to “rethink our business model to be a circular economy within ourselves,” in part by turning waste from sewage into valuable assets.

His drive to expand and upgrade infrastructure comes as conservation efforts have reduced drinking water demand in each of the seven years he’s run the company, sapping revenue and forcing DC Water to raise average residential monthly rates from $42 to $98. But by leveraging the circular economy, Hawkins sees the potential to replace lost revenue and finance new infrastructure.

The $470 million project went online in 2015. Blue Plains now removes 1200 tons of solid waste from the sewer system’s daily output of “enriched water”, in DC Water parlance, and turns it into a nutrient-rich, pathogen-free fertilizer for agricultural use.

The new treatment facility replaces DC Water systems that used to generate 60 tanker truckloads of solid waste each day.  Hawkins had recognized that enriched water wasn’t a misnomer, and that the waste was actually an asset.  Instead of continuing to turn out truckloads of lost potential, DC Water now markets the fertilizer through a new business, Bloom, which it opened on May 12.

“We’ve diversified our revenue stream and more of our costs are fixed,” Hawkins said. In the process, Blue Plains let DC Water cut its truck traffic by half, reduce costs by $10 million and cut its related carbon footprint by a third.

DC Water sees additional opportunities to enhance environmental performance and generate diverse sales. A strategy for reducing the strain on the storm water system is already at work in Bloomingdale, where some homeowners have begun to redirect the flow of water from rain gutters into rain barrels. The collected water can be stored and subsequently used to water lawns and, simultaneously, reduce freshwater demand.

Of course, this brings Hawkins back to the problem of falling volumes for his core business. He hopes to offset this lost income by becoming the service provider that helps customers install their own rain-catching systems.

Related business opportunities might include the installation of sensors at each home that monitor the composition of wastewater. That would help DC Water to modify and manage its sewage treatment system in an increasingly sophisticated and cost efficient manner.

A big challenge will be replicating DC Water’s experience among the literally thousands of water utilities that serve communities across the country.  Many of those companies are a fraction of DC Water’s size and don’t have the resources to take steps on the scale of Blue Plains.

“Who are going to be the enterprises that are going to be involved in the transformation in a circular fashion of this company,” Hawkins asks.  And, who might step to the plate with circular economy innovation for the vast market that lies beyond?