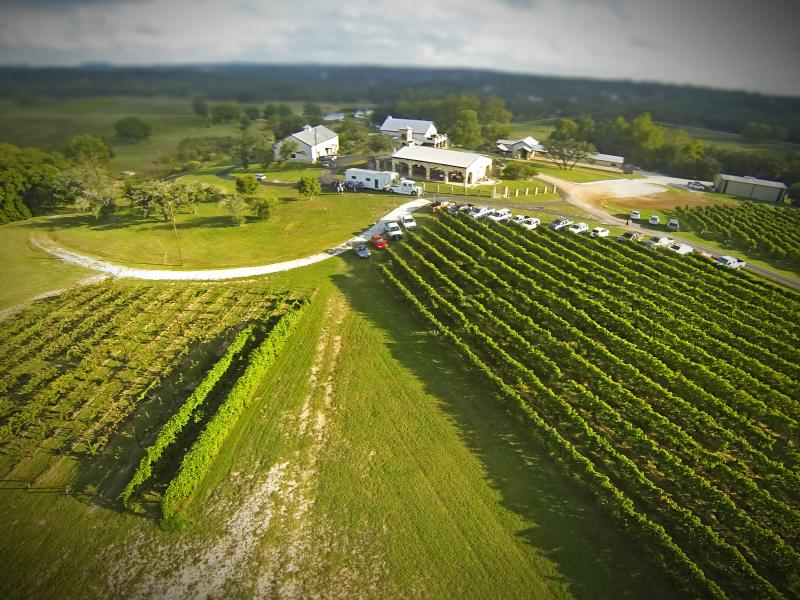 Tweet Facebook
From measuring temperature to finding plant disease, drones may play a key role in the health of the wine industry.

Drones are a buzzy topic. For winemakers, they are serious business. At a recent panel I moderated at the Texas Wine Symposium, a room full of down-to-earth farmers became animated with the notion of drones as mobile platforms for precision agriculture. And who could blame them? While the Texas High Plains outside of Lubbock and Austin’s Hill Country seem far from Silicon Valley, their high-margin wine growers are hungry for an edge in a fast-growing market.

Chris Brundrett, co-founder of William Chris Wines, recently used a drone to film promotional videos of his estate. His partner in the effort was Ryan Baker, the youthful CEO of Arch Aerial, a drone maker. As the camera zoomed in for a scene, he instantly saw the tell-tale signs of a plant disease common to vineyards.

Not that Brundrett was surprised.

“Of course I knew that,” he said with a smirk.

But his casual demeanor changed to youthful exuberance when conversation shifted to detecting photosynthetic activity in his grape leaves or scaring away pests or dusting his crop. The ideas were practically endless — and endlessly practical. We’re talking information he never had before that’s actually useful, he said.

A grizzled older man in the back of the room raised his hand, asking if he could use a drone to measure temperature across altitude and distance. Sure you could, said Baker, but no one’s doing it. Fine, I’ll build it, said the man. And so he will.

Winemakers who had never laid eyes on a drone instantly saw its potential. Our panel had hardly finished our own conversation before the crowd wanted in to pepper us with detailed, practical questions. How much do they weigh? Would I need a fixed-wing or an octo-rotor craft? Can I connect them to my robots? (Yes, this winemaker employed robots, and yes he was asking about creating his own Internet of Things, just not in so many words.)

Drones carry the promise of precision agriculture. Conventional photography and near-infrared imagery produces reams of data over areas large and small that advanced software tools then stitch together into 3D models. But that is simply the beginning.

Drones carry the promise of precision agriculture. Conventional photography and near-infrared imagery produces reams of data over areas large and small that advanced software tools then stitch together into 3D models. But that is simply the beginning. The coming years will see numerous being made for drones; I won’t list them, only to say that they are simply limited by your imagination and the federal government (more on that shortly).

What we are seeing is a revolution in the capability and cost of unmanned aerial vehicles as well as the veracity of data that they’re gathering. Drones are at the forefront of a revolution in aviation thanks to growing computer power and cheaper sensors paired with automation.  In short, drones allow vineyards to know whether their vines are behaving as they should. How are their crop progressing? What issues must be addressed? This bird’s-eye view promises a more precise and proactive viniculture.

And yet policy often complicates things. The most important player in the drone industry is not a company, but the government. The FAA expects to finalize rules for commercial drones this spring. Meanwhile, the FAA is offering exemptions to allow certain drone users to, among other activities, conduct aerial photography. But final rules are still up in the air.

Personally, I came to the symposium with no clear idea what to expect. I only had strong sense that there was a potential with young and hungry winemakers to try something new, and what better place to try than in Texas? At the very least their would be a crowd there crazy enough to give drones a try (I can say that as a Texan myself). I left the room with the knowledge that we had sparked something—or perhaps more accurately, we had simply added fuel to the fire

In the coming years, watchers of the commercial drone market should keep an eye on two fields: agriculture and mining. For the latter, China’s deceleration will lead to cutbacks in surveying expenditures; LIDAR will be on the outs, drones will be in. In agriculture, farmers with large fields or high margin crops will likely be the main drivers in drone use.

Drones have long been under the gaze of the public eye, and the public likes what they see. More than that, there’s value to drones as mobile platforms deployed for all manner of businesses, including vineyards.

I believe drones could be the next big thing in agriculture. Safe and responsible commercial drone use is in everyone’s interest -- starting right now. The FAA’s rules were supposed to be in place by September of last year. Instead we are left waiting. Whatever regulations are finally put in place, they must be finalized efficiently and clearly, ultimately leaving ample room for unpredictable innovation. Especially when the results taste so good.