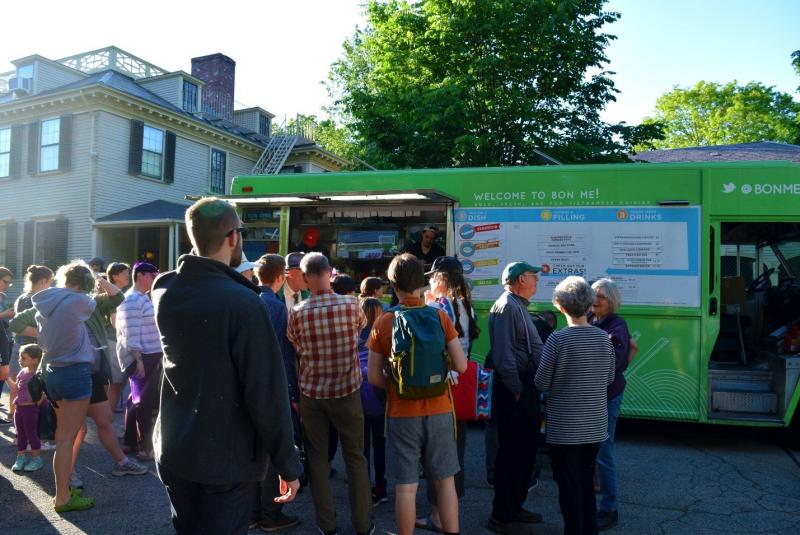 Patrick Lynch and Ali Fong launched Bon Me, an Asian cuisine food truck, in 2010 after participating in Boston’s food truck contest. Their business, which became profitable in its first year, has since expanded to include eight food trucks, two food carts, and seven restaurants with 230 employees. Patrick spoke with the Foundation about his experiences as an entrepreneur in one of the country’s fastest-growing industries.

Q: As you’ve seen in the Foundation’s Food Truck Nation report, Boston has some of the most complicated food truck regulations in the country. Did you face regulatory hurdles when you were starting Bon Me?

A: There’s no question that Boston has sought to keep reasonably close control over the market. There are particular spots on the streets that they rent out to food trucks, which can be fairly difficult for a new operator.

Overall, I can see how the report would come out with very high startup and operating costs for new food trucks. But there are some advantages to the Boston regulations. For example, you don’t have to worry about finding parking or competing for spots. It’s a well-designed system. However, food trucks do have to rely on other programs like the Greenway Mobile Eats, a separate food vending program in one of Boston’s contemporary parks. Operators can’t fill up their schedules with just the city spots. So while there is more regulation in Boston, other cities may face more uncertainty in their operations.

Q: If you could change one thing about the regulatory environment, what would it be?

A: Currently, a truck needs to be permitted in each city or town around the Boston area, and generally this permitting only applies to that one truck. It makes operating in multiple towns very complicated. I would love to see a common permitting process that would be usable anywhere in the state, or at least anywhere in the greater Boston area.

Q: What were the biggest challenges you faced when you decided to open a food truck in Boston?

A: Winning customers was the most challenging part. It’s something that you work on every day for years. It’s not enough to get new customers to try your food. You have to get them to keep coming back.

Another challenge was being able to open up on the first day. There was a lot of paperwork to fill out and other challenges at the city government level. We opened up pretty early when the process wasn’t extremely clear. Winning the city’s food truck competition helped push us along, and the city has done a lot of work since then to make the process clearer.

Q: Have there been many changes since you first started in 2010?

A: Yes. There have been some big changes. When we first started, there wasn’t much of a program for food trucks. Back then, when there wasn’t a program, you weren’t even allowed to have a food truck.

Winning the food truck challenge got us into a pilot program and allowed us to have a spot on City Hall Plaza to operate weekdays from April 2011 to October 2011. During that time, the city also started to create a general program for additional spots in the city that debuted during summer 2011. We were able to vend at other locations including in the Back Bay and near Boston University. Following the initial pilot season in 2011, the city made refinements to the program to switch it to a lottery-based system and open it up to more trucks.

Q: If you could do it all over again, would you? Why?

A: Yes. It has been a really exciting experience. We’ve grown a lot and have a lot of employees who have been with us for a long time. These are people who have advanced in their careers. It’s exciting for us to see them grow.

Q: Looking beyond Boston, what advice would you give to a budding food truck entrepreneur?

A: It’s a great deal of work. There are a lot of details to get right and you have to be willing to put in the time and work hard to get those details right. It’s like a restaurant, but harder because you have to make sure the truck is running, the generator is running, and so on. There are more logistical challenges. But it’s a good opportunity because you get to move your business around, learn the area, and don’t have to invest in just one location. You’ll get a good product if you put in the extra work.

10/21/22
Bringing Health Forward: a Recap of our Innovative Summit