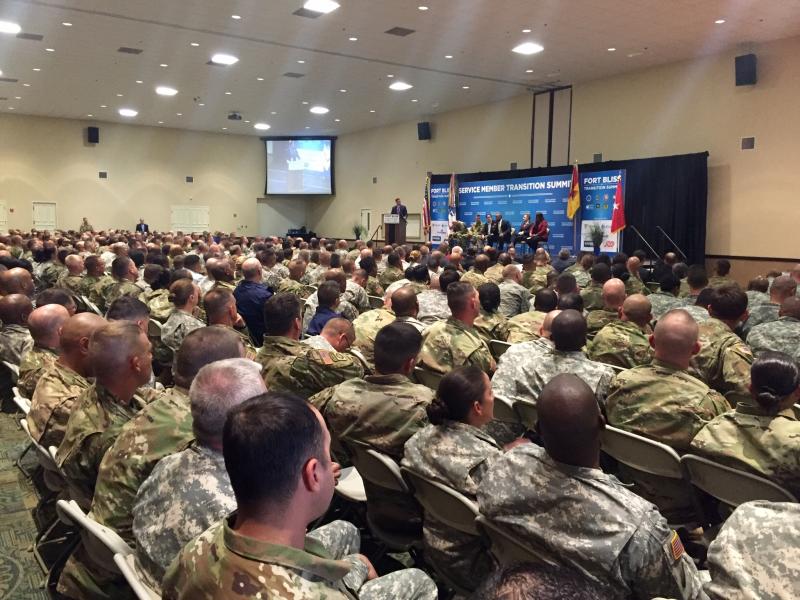 Transitioning service members and veterans attend Day One of the two-day Hiring Our Heroes transition summit at Fort Bliss, Texas, on March 23, 2016.

When Hiring Our Heroes (HOH) began in March of 2011, the employment outlook for military families was exceptionally bleak. The country’s economy was on shaky ground, and the veteran population in some demographics had an unemployment rate of more than 20 percent.

Capitalizing on the U.S. Chamber of Commerce Foundation’s connections with thousands of state and local chambers as well as engaging our partners in the public, private, and nonprofit sectors, the organization held hundreds of hiring events each year in cities across the country–connecting military job seekers with employers who were looking for the talents they possessed.

The effort was, and still is, multi-faceted. Not only did our team focus on preparing military families for a complex employment landscape, HOH placed a huge emphasis on educating employers on what exactly it is that veterans and military spouses bring to the table for a company’s bottom line.

March 24th marks HOH’s five-year anniversary, and to date, we have hosted nearly 1,000 hiring events in the United States and around the world. From those hiring events alone, more than 28,200 military veteran and spouses have been hired by companies of all sizes, and that does not even come close to counting the hundreds of thousands of jobs that we have found for military veterans and spouses through our various initiatives, programs, and online resources.

Since 2011, the unemployment situation for military families has improved dramatically -- thanks in part to the efforts of HOH, our partners, and sponsors -- but there remain key demographics within the military community still disproportionally affected, namely post-9/11 veterans under the age of 25 and military spouses. As the economic landscape has changed nationwide, both for ordinary citizens and military job seekers, we have also adapted and become more strategic in our approach.

In recent years we have focused on moving “left of transition,” connecting with service members who are months or even years away from taking off the uniform for the last time, so that as they approach civilian employment they are prepared for a new challenge. The cornerstone of this effort has been a series of on-base, multi-day transition summits, and in the last year HOH has greatly expanded our pre-transition offerings with the introduction of the Hiring Our Heroes Corporate Fellowship Program, which allows service members to train with companies while they are still on active duty. This all complements our already-robust and growing array of free online digital resources for both job seekers and employers.

We will continue to engage in this effort on all fronts, and we’re looking forward to making 2016 another banner year for our team, working until every military and military spouse job seeker who is looking for meaningful employment finds a job.