Hiring Our Heroes Continues to Highlight Military Spouse Employment in 2016

Liz at Cap One NWR.JPG 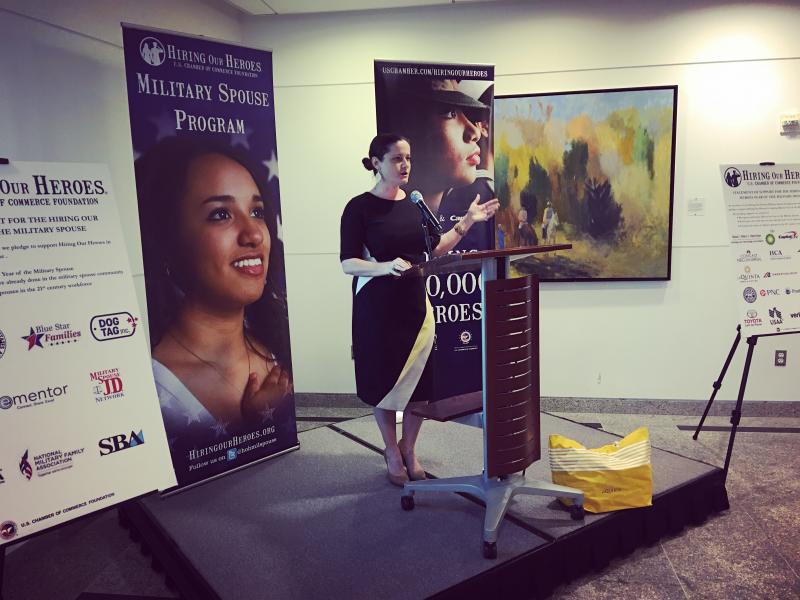 Hiring Our Heroes (HOH) has been aggressively continuing its Year Of The Military Spouse 2016 campaign in a number of different and exciting ways. Rather than representing a new focus for HOH, whose military spouse program has been up and running since 2012, the campaign is instead bringing renewed energy to highlighting the value that the military spouse population brings to employers.

At a networking event held in the Washington, DC, area in partnership with Capital One in April, many Military Spouse Employment Advisory Council member companies and a number of HOH's nonprofit partners—including the American Legion, the USO, the Military Officers Assocation of America, and more—formally signed a statement of support for military spouse employment. Specifically, these organizations pledged support to the Year Of The Military Spouse campaign and to promote the value of military spouses in the dynamic 21st-century workforce. Holly Dailey, the wife of Sergeant Major of the Army Dan Dailey, was also on hand at the event to provide encouragement to the crowd of military spouses and to meet with employers.

“As a military spouse myself, it was rewarding to see this group of people come together to continue garnering support for this campaign,” said Elizabeth O’Brien, the director of HOH’s military spouse team. “We have an exciting year ahead and being able to interact with all of these employers and spouses to help people find meaningful work is really a great experience."

This month, HOH will host a military spouse-specific hiring event at Fort Belvoir in Virginia on May 25-26, and will offer programming for military spouses at HOH's transition summit at Fort Leonard Wood on May 10-11.