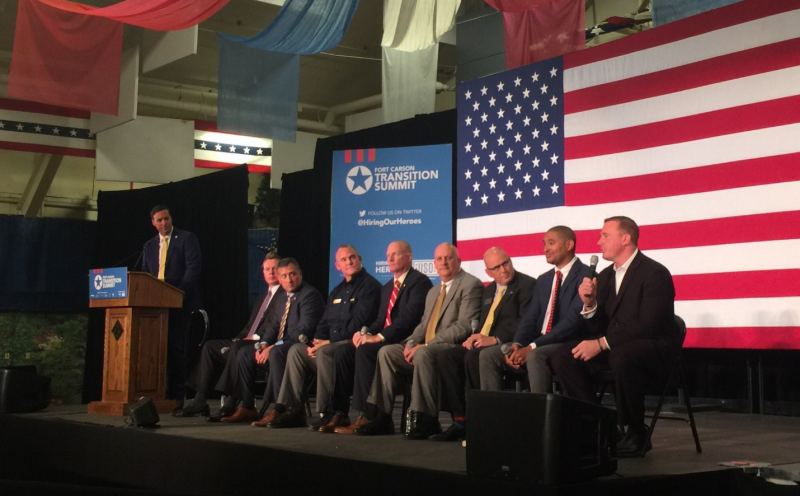 It’s never easy to make a major life transition, and that is certainly true for changing jobs.  However, changing jobs as a civilian is one thing.  Transitioning out of the military and into an incredibly complex civilian sector is an entirely different kind of test unto itself.

Since 9/11, millions of men and women have worn the cloth of our nation.  And as a veteran and reservist myself, I know firsthand the difficulties many of them face when their service is complete and they move into a largely unknown world.  Approximately 250,000 men and women make the transition off of active service each year, and they all collectively face a new mission: Success in what they do next.  For many of them, this means finding a job.

In partnership with the George W. Bush Institute, and the United Service Organizations (USO), on September 13 and 14, Hiring Our Heroes hosted a veteran transition summit at Fort Carson in Colorado, with more than 1,000 transitioning service members attending in the hopes of learning what they could do to prepare for transition and find the right career.

Former President George W. Bush was on hand to meet with service members, deliver keynote remarks, and give his insight on what the future may hold for service members making the leap from the military to the civilian community.  He spoke of the way ahead for military families in search of employment, and new projects on which Hiring Our Heroes and the Institute will be partnering.

“They are the one percent who kept the 99 percent safe,” President Bush has said of veterans.  “And we owe them, and their families, a deep debt of gratitude.”

Hiring Our Heroes was started in 2011 as a program of the U.S. Chamber of Commerce Foundation at a time when the national unemployment rate for veterans was reaching critical, emergency levels.  Although that rate has now dropped to near-record lows (approximately four percent), there are still key demographics within the military family community that continue to struggle.  Post-9/11 veterans under the age of 25, and military spouses facing unique challenges all of their own, continue to face shared difficulty in finding employment.

The hurdles faced by service members when they leave the military are different for each individual; one of the most significant of those challenges is the failure to prepare properly and far enough in advance of transition.  Part of this summit at Fort Carson was aimed at getting troops to recognize that transition is a constant process, not just the day they pick up their discharge papers.

All three of our respected organizations have made a tremendously positive impact over the last several years in the lives of transitioning service members and military spouses, especially with enormous the value added of the endorsement of a former president.  While we know that great strides have been made in the area of finding employment for military veterans and their spouses in all sectors, there is work that remains to be done and we will continue forge ahead with added enthusiasm until our mission is accomplished.  That mission is making sure that every military veteran and spouse who wants to work is able to find truly meaningful employment.

Eric Eversole is the President of Hiring Our Heroes, and a Vice President at the U.S. Chamber of Commerce.