How Business’s Good Character Gets the Job Done

Corporate executives across industries and sectors continuously seek a “license to operate” from the public. In essence, this means the company is actively working to gain and maintain the reputational support needed to achieve its short and long-term business objectives. They must build a reputation that assures the public that their behaviors are consistent with their values. 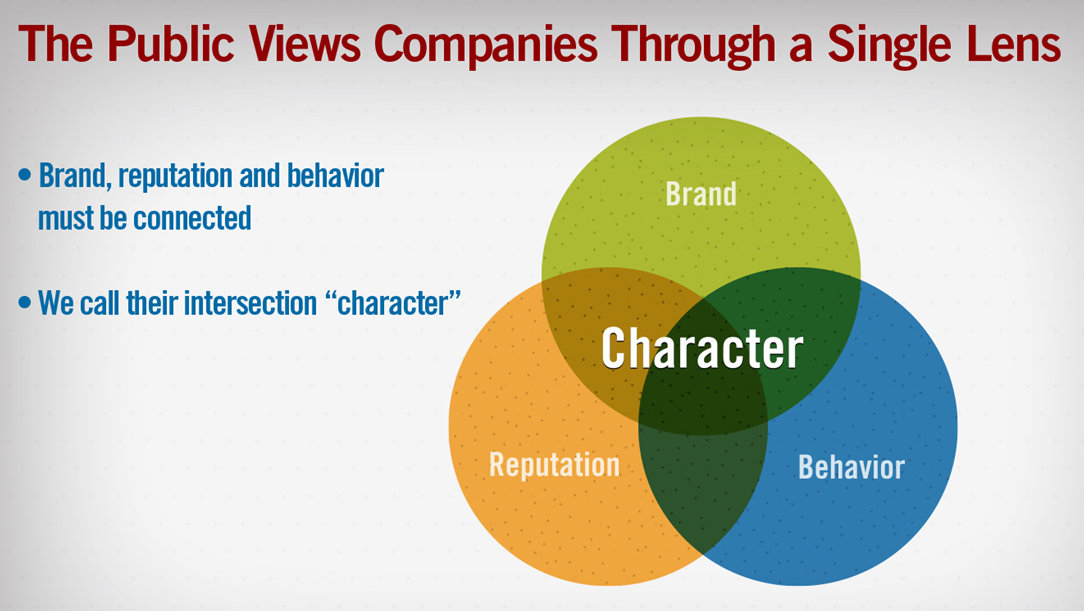 To their credit, many companies have put in place innovative programs and initiatives to engage their audiences and show that the company is worthy of the public’s trust in its brand and reputation.

However, many executives don’t fully appreciate that today’s public takes a much broader, integrated view of the company when evaluating the company as something worthy of their trust. They perceive the company as a whole, not segments that they choose or do not choose to interact with.

Companies have been slow to present themselves to the public in the same way that the public looks to evaluate them. Too often corporate executives segment their audiences by issues or corporate functions – an approach that prevents the public from being managed in a coordinated, strategic manner across all functions of the organization.

Recent research by Hill+Knowlton Strategies shows there are three primary filters by which the public evaluates companies, and each is related to the other:

H+K Strategies believes the intersection of those three filters is called “character.”

In other words, our research shows that when someone wants to enter into a relationship of trust with a company (like investing or purchasing a product) they make a value judgment of the company. They want to determine whether or not its character is aligned with their own perception of character.

Simply stated, the public often asks: “Is this a company I want to be associated with?” If the answer is “No,” the company not only has lost a customer or investor, but it also has failed to make the emotional connection needed to establish trust.

Companies face significant headwinds in their efforts to build public trust. For example, H+K Strategies research shows that nearly 90% of Americans believe that companies need to do more to bring their behavior in alignment with their publicly stated values. When asked to grade corporate efforts to behave responsibly, have a positive impact on society and be trustworthy the American public gives companies a “C.”

Perhaps even more challenging is speed at which the public is evaluating and making a judgment on companies. Seventy five percent of the American public believes they have more access to information about companies than ever before. Combined with social media, this increased transparency gives consumers near-instant access to decision-driving information from peers and influencers.

As a result, companies no longer fully control the narrative about their character. Instead, people look to outside sources to assess the character of a company. For example, 55% of Americans seek the opinions of friends and family and 46% go to the websites of third party organizations. In contrast, only 12% trust emails from a company to give them an accurate picture of its character.

Despite those challenges there is a path forward. As another set of research by H+K Strategies indicates, the public wants companies to transparently communicate their efforts to be responsible through things like reporting on efforts to be sustainable and responsible. The public will have a higher degree of trust in companies that do so, even for those with a damaged reputation.

In telling that story, companies must adapt to the way people consume information. The story must be brought directly to the audience, wherever they are. Content must be conveyed constantly to compete with all the other information being shared and consumed by the public. It must reach people through social media platforms on their mobile devices, by video content on their laptops and through traditional media channels, such as newspapers, magazines and TV.

It has never been harder for companies to gain – and hold – the trust of the public in a way that secures a license to operate. But it can be done – by engaging the public every day in a broader story about a company’s character, sharing its specific commitments for responsible behavior and engaging in an honest dialogue.