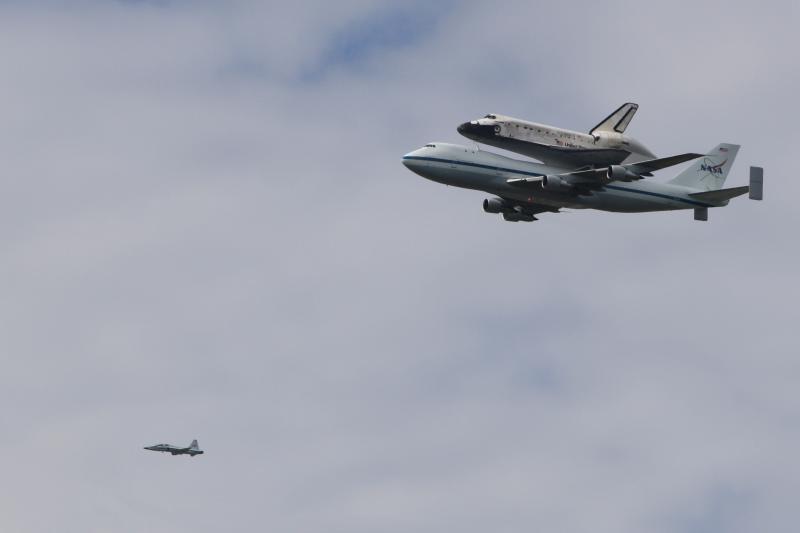 The United States has changed the world in many ways. Our inventions, innovations and enterprising national nature impact people around the world every day, and for decades, one of the biggest feathers in America’s cap was our space program. Today, however, our outer space workhorses – the Shuttles Atlantis, Endeavour and Discovery and its non-flying predecessor, the Enterprise – have been permanently retired, relegated to museums and history books and ending an incredible era in America’s space program. The Shuttle Discovery (carried on the back of a 747) flew around Washington, DC, four times on Tuesday, April 17th as part of what famed columnist and pundit, Charles Krauthammer called a “funeral procession” to the National Air and Space Museum. For those of us who were fortunate enough to be a part of the program, the Shuttle’s final tour of America has been a slow, painful goodbye, but as with all things, the end of one era is also the beginning of another.

In a recent and eloquent piece for the Washington Post, Krauthammer wrote about the Shuttle’s retirement, making a case for how America’s space program is important for U.S. growth and leadership. He wrote:

“Who cares, you say? What is national greatness, scientific prestige or inspiring the young — legacies of NASA — when we are in economic distress? Okay. But if we’re talking jobs and growth, science and technology, R&D and innovation — what President Obama insists are the keys to ‘an economy built to last’ — why on earth cancel an incomparably sophisticated, uniquely American technological enterprise?”

To be sure, the Shuttle needed to be retired more than a decade ago for a host of reasons, most notably because it was way past time for the next step in rocketry/space travel to take its place on the launch pad.  When you have to buy your computer and other vehicle replacement parts from eBay (as the Shuttle program was indeed doing since many of its parts were no longer manufactured), it’s a good sign that your technology is way behind the times.

In the nearly 15 years I spent in the space program, I watched at least four different major programs master the production of more PowerPoint slides than assemble stackable pieces of hardware that flew up where they belonged and were intended. For technical, political and economic reasons, those steps were never followed through, and as a result, we as a nation atrophied our talent and expertise in one of the most novel of areas – pioneering human spaceflight. For the thousands of NASA employees and contractors who dedicated their careers to sending American ingenuity into the perilous and exciting frontier of space, the Shuttle’s retirement – and the end of America’s space program – has been an emotional, trying experience.  A recent 60 Minutes profile on the economic and psychological impact in Brevard County, Florida (the Space Coast home to NASA’s Kennedy Space Center) was one of the most heart-wrenching things I’ve ever seen.

While the U.S. Government’s space venture has (at least temporarily) come to a close, the private sector’s space exploits have really only just begun.  Companies like SpaceX and Richard Branson’s Virgin Galactic and others in the private sector are offering some truly novel approaches that could revolutionize America’s course in space.  The commercialization of outer space will bring the benefits of a free market to bear on the development of better, more efficient and more advanced means for space exploration.   Competition is and always has been a driving force to innovation.  History accurately records the national pride stakes we as a country faced when we competed against the then-Soviet Union in our pursuit to put some of our own on the moon.   With the shuttle program over, a similar competitive incentive is arising in America’s private sector, with companies vying to provide the most efficient and profitable space transport to the International Space Station and beyond.

Until those private sector seedlings can firmly take root, however, we are in a truly unsettled time for a nation that was built by pioneers and whose eyes were always set on future horizons. America has never been a nation comfortable sitting on the bench on the sidelines. With any luck, the experiences of this week’s flyby of Discovery and delivery of Shuttles Enterprise, Atlantis and Endeavour to their final homes around the United States in the coming weeks will prompt this country’s leaders to get us off that bench and back into the game where we have always belonged.

For now, however, America lacks the capability to even escape Earth’s gravity.  We’ve literally outsourced that capability to our one time competition - the Russians.  It’s still mindboggling and angering that we as a nation cannot easily or regularly access the very space station that American taxpayers paid for.  There’s something fundamentally wrong with that premise but it is the fact of our country’s place in space today.  For now we are literally forced to sit on the sidelines and warm the bench.   America has never been a nation of benchwarmers, and I hope we all get to see very soon a national willingness to get back in the game. The view is much better when you’re on the playing field and it feels a whole lot better too.