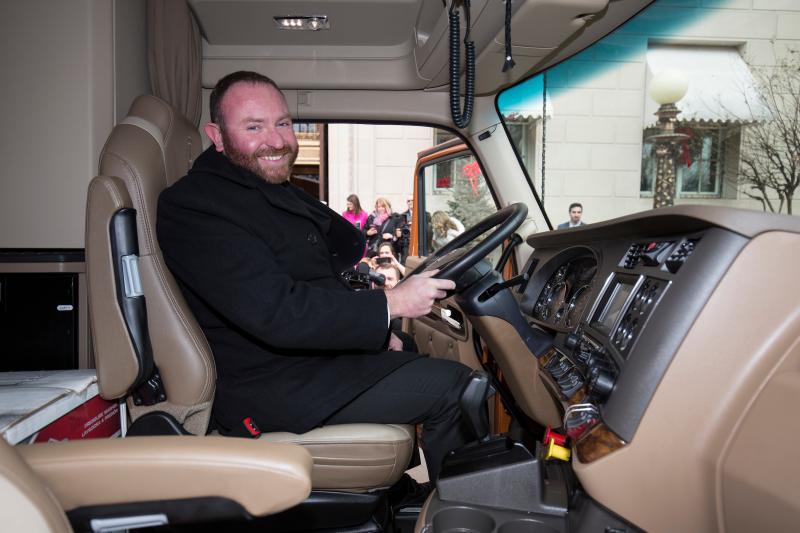 Navy veteran Troy Davidson sits inside the Kenworth T680 truck he won as part of the Trucking Transition campaign held by Hiring Our Heroes, Kenworth and FASTPORT.

A Navy veteran and former mechanic for the Blue Angels walked away with the keys to a new Kenworth T680 truck on Friday as part of the “Transition Trucking: Driving for Excellence” campaign presented by Hiring Our Heroes.

Troy Davidson, a Michigan resident and driver for Werner Enterprises, won the truck after being named the top veteran rookie driver following a national selection process designed to highlight the trucking industry as a good fit for military veterans.

"This is a life-changing event,” Davidson said in a ceremony at the U.S. Chamber of Commerce. “I'm not going to let anybody down. It's very humbling and I am honored to be here today to accept the keys of that pretty truck out there."

The Transition Trucking campaign is a partnership involving Hiring Our Heroes, Kenworth, and FASTPORT.

All recent veterans who successfully made the transition from the military to trucking were eligible to be nominated to win the truck, which is fully loaded with a stamped aluminum cab and sleeper. The T680 is known as the “driver’s truck” for its top notch amenities.

Davidson served in the Navy and was a mechanic for the esteemed Blue Angels flight demonstration squadron.

“I’m ready to get the wheels rolling and make some money out there,” he said.

Two other finalists won $10,000 as runners-up. They included Russell Hardy, an Army and Navy veteran and driver for Trimac, and Kevin Scott, an Army veteran who drives for TMC.

“Why are so many veterans hired in the trucking industry? I assure you, it’s not because of charity,” said Shannon DiBari, chief operating officer of the U.S. Chamber of Commerce. “It’s because of the unique skills they bring to the workplace.”

The finalists came from a pool of nominees from the trucking industry, and a selection committee comprised of representatives from trucking companies, driver schools, and trade associations.

“Trucking has a story to tell; who better to tell it than the military veterans in our industry?” said ATA President Kevin Burch.

The public also had a chance to vote online for their favorite finalist.

“We coudn’t be more honored to recognize the commitment you’ve made not only to your country, but your industry,” Hiring Our Heroes President Eric Eversole said. 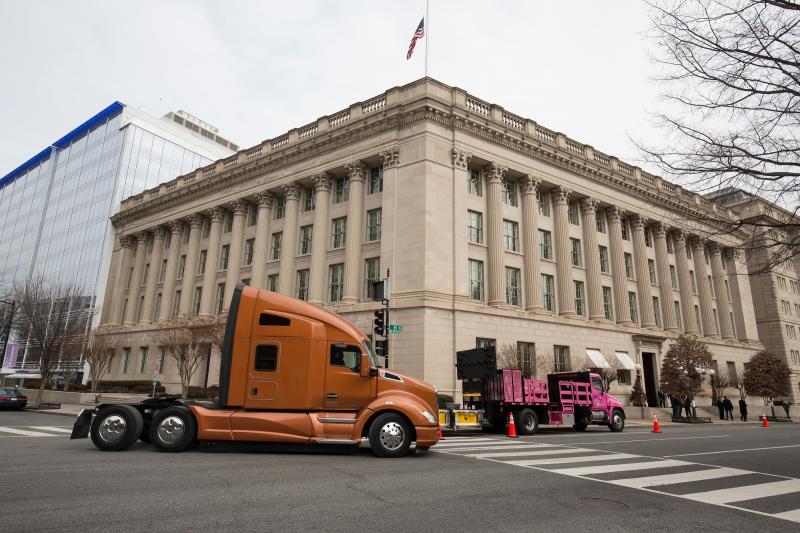 A Kenmore T680 truck pulls up in front of the headquarters of the U.S. Chamber of Commerce.