The Power of Cross-Sector Collaboration 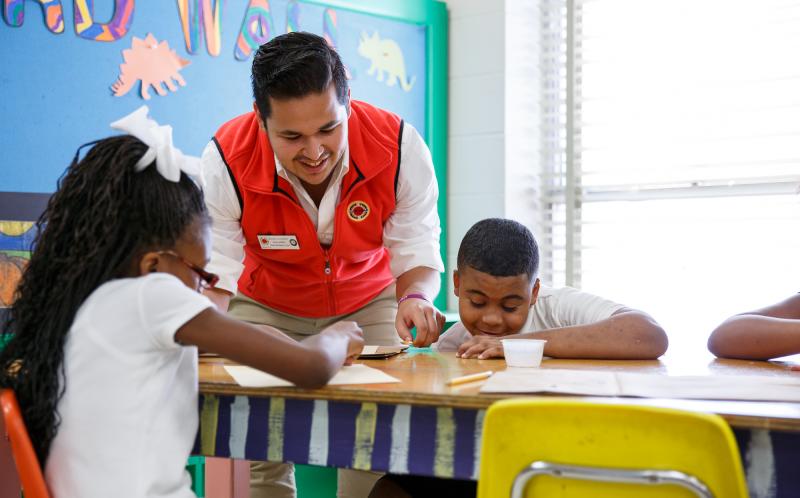 Kansas City Public Library. Union Station in Denver. Wrigley Square in Chicago. The Pennsylvania Convention Center in Philadelphia. What do all these urban landmarks have in common? They are locations of City Year’s Opening Day events, inspiring swearing-in ceremonies where City Year AmeriCorps members launch their service year.

This school year, 3,100 City Year AmeriCorps members – our largest national corps to date – are serving 205,000 students full-time in more than 300 high-poverty elementary, middle and high schools in 28 cities across the United States. In these urban communities, students are growing up with City Year in school, year after year. Our diverse teams of AmeriCorps members help students stay in school and on track to graduation. They serve from before the first bell rings each morning until after the last child has been picked up from the after school program. In between, they give students individualized attention—providing tutoring in academics and mentoring in life skills, like teamwork and goal-setting—all while helping to promote a positive culture throughout the school.

Opening Day season is a momentous time for us because it’s an opportunity to powerfully and publicly launch a new year of service alongside community champions and public- and private-sector partners who make our service possible. These partners include the Corporation for National and Community Service (CNCS), the federal agency that administers AmeriCorps and other national service programs. Late last year, as CNCS faced potential cuts, Democratic and Republican lawmakers worked together to make sure national service was not only protected, but expanded by $51 million. This broad bipartisan support, aided by a dynamic campaign to protect and grow AmeriCorps, led by Voices for National Service and supported by City Year’s corporate and philanthropic partners, ensures that the work of  City Year and other national service programs can continue in 2016 and 2017.

Time and again, national service programs have proven themselves to be one of the most effective and cost-efficient ways to address many of the country’s most persistent challenges. One example from our work at City Year: According to a recent third-party study by Policy Studies Associates, high-poverty schools in urban neighborhoods are up to two to three times more likely to improve on state student assessments in English and math if they partner with City Year AmeriCorps members for academic and social-emotional supports.

“City Year has been one of the most impactful near-peer mentor programs I've measured in over three decades of public education service,” says Dr. Good. “The effects of the corps on student attendance, behavior and course completion has contributed to double-digit percentage gains in achievement, an extraordinary decrease in reported disciplinary incidents, and a significant increase in the number of students matriculating to the next grade level. I have the data; the partnership works!"

Cross-sector collaboration among public, nonprofit and private sectors is what makes this happen, stretching federal dollars further and accelerating positive results in our communities. This year in Philadelphia, Otis Hackney, Chief Education Officer of the City of Philadelphia, and Art Block, Executive Vice President, General Counsel and Secretary of Comcast and Co-Chair of the City Year Philadelphia Board, will share the podium and the Opening Day ceremony with City Year Philadelphia Executive Director and Vice President Darryl Bundrige, demonstrating the kind of public-private-nonprofit partnerships that make our work possible. In fact, all of City Year’s Opening Day events are sponsored by Comcast NBCUniversal, one of City Year’s national partners since 2003 and a proud member of Employers of National Service, a group of hundreds of employers who value the skills acquired through national service and actively recruit alumni of AmeriCorps and other service programs.

Comcast NBCUniversal has so far invested more than $87 million in cash and in-kind support to City Year that goes directly toward our important work in schools, recruiting more young people to serve, and helping AmeriCorps members hone their leadership and professional skills to position them for careers after City Year. Corporations including Comcast NBCUniversal, AT&T, Bain Capital, CSX, Deloitte, New York Life and PepsiCo, among others, whom we are lucky to call our national partners – understand the power of national service and help make it possible for us to leverage federal funding from AmeriCorps at a rate of more than two private dollars for every federal dollar invested.

This year, we are observing Opening Day in more cities than ever before, as City Year Kansas City, our newest site, celebrates its inaugural Opening Day on September 16. In partnership with Kansas City Public Schools, with founding support from the Ewing Marion Kauffman Foundation and critical federal funding from the Corporation for National and Community Service, 50 City Year Kansas City AmeriCorps members are now serving in five high-need public schools.

I have been to dozens of Opening Day events in City Year’s 28-year history and am always inspired anew by the energy, idealism and hard work embodied by our dedicated AmeriCorps members. My favorite part of these ceremonies is watching the incoming corps members raise their right hands and take the AmeriCorps pledge:

I will get things done for America – to make our people safer, smarter, and healthier.

I will bring Americans together to strengthen our communities.

Faced with apathy, I will take action.

Faced with conflict, I will seek common ground.

Faced with adversity, I will persevere.

I will carry this commitment with me this year and beyond.

I am an AmeriCorps member, and I will get things done.

In those moments, idealistic AmeriCorps members stand proudly before community members, sponsors and family members in their newly earned City Year jackets. They are united, speaking with one voice. Their energy and commitment overwhelms the space. It makes real the sense of hope and idealism and grit that is so essential to the work we do, and the “can do” American spirit that we need today, perhaps more than ever. And it reminds me of the tremendous possibilities of what we can accomplish when we call on young people to serve and give them the opportunities to do so, like Mario Ayala, a City Year AmeriCorps member who served in Dallas, the community in which he grew up.

“I want students to go from ‘Yes, I can,’ to ‘Yes, I will,’ to ‘Yes, I did,’” said Mario. “I want the students I meet to realize that the conditions of their birth should not determine the outcome of their lives. It is up to them what they become.”

Michael Brown is CEO and Co-Founder of City Year, an education-focused nonprofit organization founded in 1988 and fueled by national service that is dedicated to helping schools and students succeed.