U.S. Chamber of Commerce Foundation / Saving the World, One Hashtag at a Time
General Foundation
November 20, 2015

Saving the World, One Hashtag at a Time 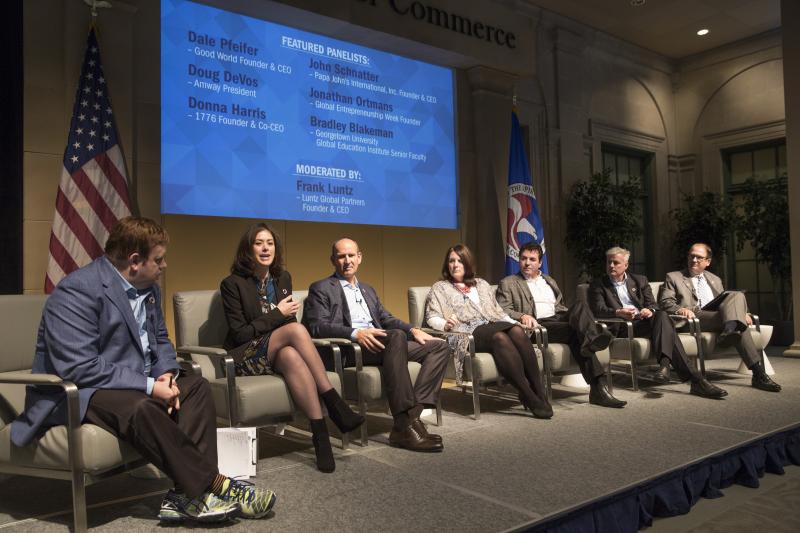 Dale Nirvani Pfeifer, the CEO and founder of GoodWorld (second from left) speaks at the Grit Happens: Defining the Entrepreneurial Spirit event. (Photo by Ian Wagreich, U.S. Chamber of Commerce.)

Dale Nirvani Pfeifer is the CEO and founder of GoodWorld, a startup company that offers a platform for charities to collect donations through social media.

Pfeifer, a New Zealand native, operates the company in Washington, D.C. with the support of incubator 1776.

This is a transcript of the interview. Some answers are edited for length and clarity.

OK, so I think I get it. A non-profit wants to raise money, it partners with you, you have the platform to allow people to Tweet out the hashtag #donate, and money goes to that nonprofit. Is it really that simple?

Pfeifer: It is very simple. The whole mission of GoodWorld is to create a spirit of generosity on social media. How are we doing that? We’re making it extremely easy for people to donate. We operate on Facebook and Twitter. On Twitter, you just Tweet out a hashtag and a dollar amount at a charity. On Facebook, you comment with a hashtag and a dollar amount in the comments section of a post.

It’s a 60-second form to sign up, and you literally never have to leave social media again.

How did you come up with the concept?

Pfeifer: I came out of the philathropic and nonprofit world and what I found was that the way people wanted to donate was changing, but the technology hadn’t caught up. I saw that a major communication channel between charities and supporters was through social media but there was no easy way to donate. People don’t like to leave social media, so if someone has to click a link, there’s a less than 1% chance they’ll click and link and go off social media.

It took me about two years to come up with #donate, after coming up with several iterations and solutions.

And you’re up to how many non-profit partners?

Pfeifer: We’re up to over 1,000. Most of the big ones…UNICEF, Save the Children, OxFam, Humane Society International, Greenpeace…you name it, they are signed up with GoodWorld.

A lot of what we talk about at the Chamber Foundation is how we believe business can be a force for good. To what degree does your company embody that idea?

Pfeifer: The mission of the company is to change the culture of social media to one of seeing your friends and family and idealistic pictures of their lives, to one of real connection. What I certainly advocate is a spirit of generosity, and we want the company to make generosity as easy as “liking” something on social media. Generosity is in the DNA of the company.

What I certainly advocate is a spirit of genorosity, and we want the company to make generosity as easy as “liking” something on social media. Generosity is in the DNA of the company.

The 2015 Amway Global Entrepreneurship Report talked about self-fulfillment being a major motivating factor for enterpreneurs. To what degree is that true for you personally?

Pfeifer: That’s incredibly important. I was working in the nonprofit world and working on some amazing projects. But I remember being at home in New Zealand at Christmastime and thinking that I was doing good work but I took a step back and started to think, ‘with my gifts and talents and resources I have, what would be the highest expression of  being for the good of the world. And that’s when I decided to create GoodWorld. I could have had a meaningful career, carrying on and working for nonprofits and foundations, but when you discover your purpose—and every single one of us has a purpose and a unique contribution to make—that can be one of the most exciting things in terms of career fulfillment.

Another statistic from the report is that 67% of respondents believe entrepreneurs want to help people. Do you agree?

Pfeifer: Absolutely. I think there is a sense of idealism and a sense of creating and doing things better—to  unpacking the status quo and creating better and more fulfilling ways of doing things.

How do you measure success?

Pfeifer: We have two success metrics. There are the success metrics we set with our investors, and then there are success metrics tied to the mission, which is to do good in the world and create a culture of generosity. With the investors, it’s very much about number of donors, revenue, repeat donors, and charities that have signed up. Repeat donors is also a very important metric for the mission side of the company, because what it means is that people are really valuing the experience. One in five of our donors is a repeat donor, and that’s something we’re very, very proud of.

Have you been able to calculate the amount of money that’s been donated through your platform?

Pfeifer: There have been more than 20,000 hashtag donations pledged, and about two-thirds of those have been converted. That’s about a half-million dollars pledged. And we’re very young; we just launched the product with the scalable payment system in April. But we’re growing rapidly, and that’s very exciting.

What’s the reaction from investors at this point?

Pfeifer: We are so, so lucky to have the most remarkable group of investors. We have three venture capital firms and then a series of angel investors. Hans Morris leads Nyca Capital Partners; we have Max Levchin who was a co-founder of PayPal; Osama Bedier, who led the development of Google Payments and Google Wallet; we have Chris Liddell who is the ex-CFO of Microsoft and General Motors; Katherine Weymouth, the ex-CEO of the [Washington] Post.

They are so committed to the mission of the company, which is something that really, really surprised me. They would rather we grow a little slower and keep in line with the mission of the company. Because as you can imagine, there are so many people who want to pull us off…because what we’ve done is we’ve created hashtag payments. We’re focused on charities, but as you can imagine, we’re getting all sorts of people who want to use us for commerce and politics. But our investors really want us to stick to the mission, and I think that really speaks to the new wave of capital investment  that is happening right now that’s around social entrepreneurship.

We’re focused on charities, but as you can imagine, we’re getting all sorts of people who want to use us for commerce and politics. But our investors really want us to stick to the mission, and I think that really speaks to the new wave of capital investment  that is happening right now that’s around social entrepreneurship.

What are some of your favorite causes?

Pfeifer: Well, the first charity I ever donated to was Greenpeace. My mom had a Greenpeace sticker on her car, and coming from New Zealand where the environment is so protected and sacred, environmental issues were always big for me.

There are a couple of nonprofits that touch my heart right here in D.C. There is a beautiful nonprofit called Piles of Smiles, where they have artwork sales, selling kids’ art, and the proceeds go to fulfilling the wishes of kids with cancer. There’s also a charity called the Ukulele Orchestra, where people get together and perform for sick kids at hospitals and cheer them up.

You have a great technology and social media background. Do you have any thoughts on how we can get girls and young women more involved in the STEM fields?

Pfeifer: Technology is the mode to innovate these days, so you have to live off that foundation. I see a shift happening right now…it is tough as a woman, only a small percentage of companies that get venture funding are women-led. But at the end of the day, it’s all about the quest for self-improvement and the quest to be better. It’s not just women, but also minorities and even men, you have to push and hold the pursuit of excellence firmly in focus.

Have you had any mentors who have helped you along the way?

Pfeifer: Oh, my gosh, yes. Donna Harris of 1776 has been a real inspiration. We have Kevin Roberts, the executive chairman of Saatchi & Saatchi, the advertising agency, as a mentor and he is on our advisory board and has been very involved in the company. He’s the one who said to us, “GoodWorld is not a company. GoodWorld is a movement.”

Chris Liddell is another…also a Kiwi, he really pushes me on the financial model of the business.  Adam Grant, who is one of Wharton’s most popular professors under 40—he wrote a book called Give and Take, which is about using giving as a theory of motivation.

Pfeifer: Part of it might be that women are often the ones who stay home with children, but it can be difficult to get back into the workforce. I have no idea what the data says, but it may be women who decide to create something for themselves because they haven’t been able to get back into the workforce in a way that’s meaningful to them, or want to create something that’s better for their children.