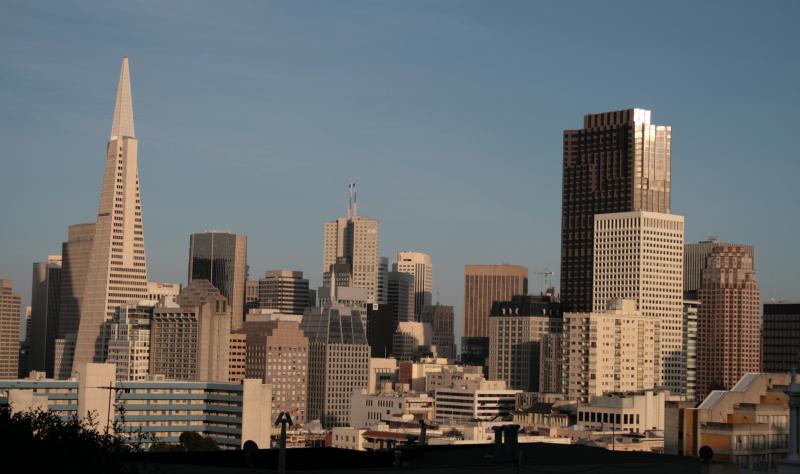 What is San Francisco and Silicon Valley’s secret sauce? In a word, networks. The region’s connectivity—together with its wealth and openness to smart people—is at the heart of its risk-taking and resilience.

Together with 1776, DC’s global startup incubator, we spent a day with the Bay Area’s leading lights to figure out just what made its startup ecosystem tick—and what should have it worried. The point is for other cities to learn from the area’s example. The only thing better than Silicon Valley, after all, are 50 Silicon Valleys.

The notion of networks being at the heart of the Bay Area’s success isn’t exactly new. AnnaLee Saxenian, a professor at Berkeley, predicted in the 1980s that Silicon Valley’s best days were behind it. She was wrong. Her exploration of why she was so wrong led her to conclude that it was Silicon Valley’s social networks that enabled it to leapfrog Boston’s Route 128 tech corridor. The rest, as they say, is history.

But history is present at the top of Silicon Valley’s networks. The most successful leaders in the Bay Area are a highly interconnected bunch who’ve known each other for years and seek out ways to enable each other’s work. While some may eye such ties warily, they simply reflect connections that exist throughout every level of the area’s startup ecosystem. And these connections at the top flow downward

to draw others up.

These networks are open too, according to local startup leaders. No matter how important they are, people working in the land of tech and startups are willing to sit down for coffee or lunch. In fact, someone who moves to San Francisco without knowing a soul stands a good chance of finding themselves embedded in community within a year.

There’s a “rising tide lifts all boats” mentality that feeds into the communitarian spirit of the Bay Area. Local startup founders attest to how much help (and luck) they received when getting their venture off the ground. Few in the area seem to believe that whatever success they’ve gained came mostly from their own efforts. Even fewer seem to have anticipated the path their careers have taken. As such, many recognize the need to help others along equally untraditional paths.

No wonder that San Francisco and its neighbors are rife with mentors. Contrary to its image as the land of youthful tech titans, the Bay Area is full of experienced pros willing to lend their know-how and leadership to fledgling ventures. Money helps cement these connections too. It’s expected that successful entrepreneurs will pour their newfound wealth back into the startup community. One founder begets more founders. And it’s one reason why there’s so much capital for Silicon Valley startups. Not simply because there’s more money in more wallets, but because the wallets are more open.

For those from the Bay Area, many of their connections began well before college. High schools in particular are a large driver of informal networks. Universities such as Stanford and Berkeley only strengthen these ties and then enliven them with fresh faces from around the world.

Even those from far away enjoy the world’s ultimate social network. Immigrant communities are thriving in and around San Francisco, and they will go to great lengths to help their members out. Santa Clara, for instance, boasts a thriving Indian community. It is not unheard of for entrepreneurs from the Indian subcontinent to flock to TIE Silicon Valley meetings in Sunnyvale and walk out with the funds in-hand to start their latest venture.

AnnaLee Saxenian, who once wrote an entire book on the immigrants who had come to Silicon Valley and were now taking their networks global, summarized the power of connected talent thusly:

You have people who have been here for 40 or 50 years who have seen wave after wave of technology and have continued to invest or work on boards. They have a depth and a breadth of talent here that’s really unparalleled in the world. Young graduates who are really motivated, from almost anywhere in the country and the world, this is a place that draws a disproportionate number of them. So there is a kind of increasing-returns phenomenon here that people just keep wanting to be here and it keeps drawing great people. … So you’ve just got a tremendous depth of talent here that would take a long time accumulate elsewhere.

The Importance of Go-Betweens

Networks simply don’t thrive on their own. Conveners and go-betweens stand in the middle of the wide gaps between individuals and institutions. These include institutions—such as startup accelerators, incubators, and meet-up groups—but also the influential leaders in the Bay Area’s community who thrive on facilitating connections. Particularly for startups going head-to-head with large institutions—such as in healthcare, energy, education, and civic innovation—there is a distinct need for groups like Impact Hub and Galvanize to make connections and provide founders with the right knowledge.

Large companies also play a role supporting startup networks. They tend to connect with fledgling companies through the personal networks of their employees rather than concerted top-down efforts. Simply having employees be a part of the same tech-oriented community as their company grows means that they have connections with their peers from when they were in a startup all the way to becoming globe-trotting multinationals.

Local companies also play a role in spinning off entrepreneurial talent, such that a smart 40-year-old can leave a large firm and put out her own shingle. The larger company sometimes buys the firm that the founder just left; that is, after helping release an idea to the public. Facebook, Twitter, and Yahoo are among the most active “acqui-hirers,” according to data from CB Insights. Hackathons, open data standards, and APIs also have in common the ability to link large companies with the startup ecosystem, bringing that individual, bottom-up connectivity into the fold.

“Nerds love Silicon Valley,” says Josh Barro, writing in The New York Times. Research from the Brookings Institution shows that San Jose employs the most “advanced industrial” workers in the country, while the Progressive Policy Institute shows the Bay Area enjoying the largest gain in tech jobs from 2009 to 2013. These jobs are feeding the area’s immense demand for talent.

Locals in the startup space always seem to be thinking or talking about technology. It’s just in the air (or the water, which is likely caffeinated). Put another way, the level of discourse in San Francisco is high. It turns out that when you cram a city full of bright young things, knowledge spreads more rapidly and completely.

One thing that newcomers are often surprised by when they parachute into the Bay Area is its competitiveness and industrial-level pace. This isn’t Southern California dreamin’. Many of those in the tech space work very long hours under tight deadlines. Particularly when starting a new company, there are no boundaries in life too high that work can’t surmount. The truth is that no one seems to mind the pace much when they have cool things to work on and when competition doesn’t mean risking the proverbial knife in the back. Competition is still a communal activity. 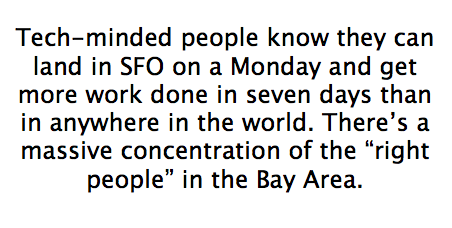 Tech-minded people know they can land in SFO on a Monday and get more work done in seven days than in anywhere in the world. Why? Because there’s a massive concentration of the “right people” in the Bay Area, particularly the sort who’ll be willing to champion a cause or a company. But more in the DNA of the place is an appetite for and willingness to take risk that’s simply unmatched. To tap into that for a week or a lifetime is incredibly valuable to a fledgling company.

Startup founders attest to spending roughly a quarter of their time hiring workers. While this may seem a rather poor investment of a founders’ precious time, in the knowledge economy they live and die based on the brains under their roof. Indeed, any tech business worth its salt engages a professional recruiter from the get-go.

Yet even when founders have managed to hire someone, it’s difficult to retain them. This is especially true for engineers, who appear to have invented a legal way to print money. Founders regularly talk about moving their engineers out of town to get them far away from the clutches of headhunters.

It takes a lot of money to hire these nerds. The median wage in San Francisco for tech workers has risen roughly 15% a year, from $90,000 in 2009 to north of $180,000 in 2014. Raising the necessary capital to hire these workers—let alone run the actual business—takes up a lot of a startup founder’s time.

Fortunately, the Bay Area is not short of cash. In the first six months of 2014, Silicon Valley saw $11.66 billion in tech investment, more than New York City has received in the past five years combined. Silicon Valley venture capital (VC) firms accounted for roughly half of all “mega-deals” of over $100 million. Andreessen Horowitz, New Enterprise Associates, and Google Ventures were among the most active VCs in Silicon Valley.

Even as VC money pours down Sand Hill Road toward an eager crowd of startups, some founders report finding early access roads, such as seed funding, to be slowing. While data on seed deals show the amount of dollars invested to be holding steady, the number of deals has increased dramatically. Moreover, so-called “mega-seed” deals of $10 million-$20 million are on the rise. This means smaller seed rounds for most early-stage firms.

So yes, raising capital is always a challenge. And San Francisco’s startups struggle to find talent. But press local startups and they’ll say those challenges are symptoms of a deeper worry: the challenge of “noise.” With so much entrepreneurial activity, how can they rise above the madding crowds?

Every San Francisco or Silicon Valley startup founder at one point or another feels like a small fish in a big pond. It’s simply a reality of doing business in the Bay Area, America’s boomtown.

Yet the secret to the area’s success holds true for every good startup: get the best people you can, connect them together, give them the resources they need, and then get out of the way.