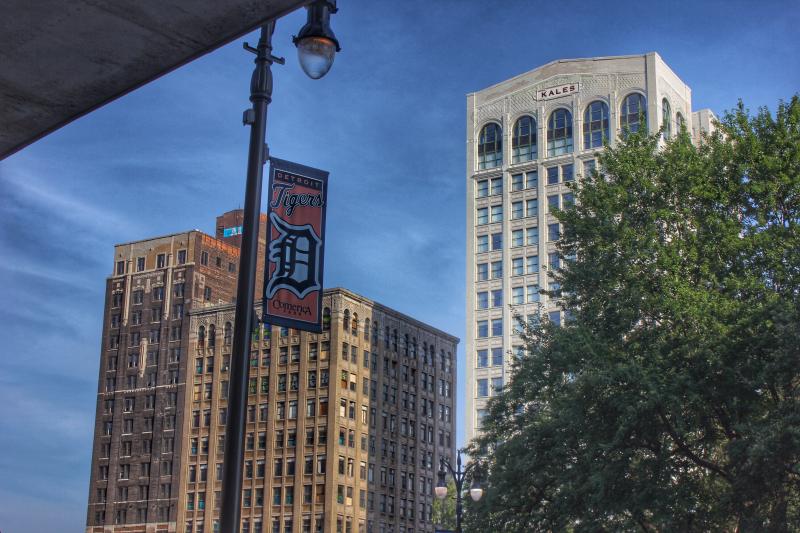 There is a block just off of Detroit’s Woodward Avenue where the city’s future is being built. Just a few years ago this cluster of buildings, known as Madison Block, housed squatters. Today some 300 young people are hard at work on 50 new startups.

In late winter this year, 1776 and the Chamber Foundation visited Grand Circus, Detroit’s coding bootcamp on Madison Block, to find what was making Motor City’s startups run. What we found for our Innovation That Matters report was a city far from dead.

“We’re at a tipping point,” said Paul Riser of TechTown Detroit. “People are seeing unique things happening in Detroit and want to be on the cusp of the rise.”

Madison Block shouldn’t exist. Detroit is barely two years removed from the largest municipal bankruptcy in American history. Even today a large sign at the end of the block offers “free coffee” to anyone willing to buy the vacant building on which it hangs. Detroit has a long way to go before recovering a hint of the glory that once made it America’s original Silicon Valley. Yet there’s hope among this city’s startups. They’re building a community of like-minded people, and seeing leaders lay the groundwork for a new Detroit. 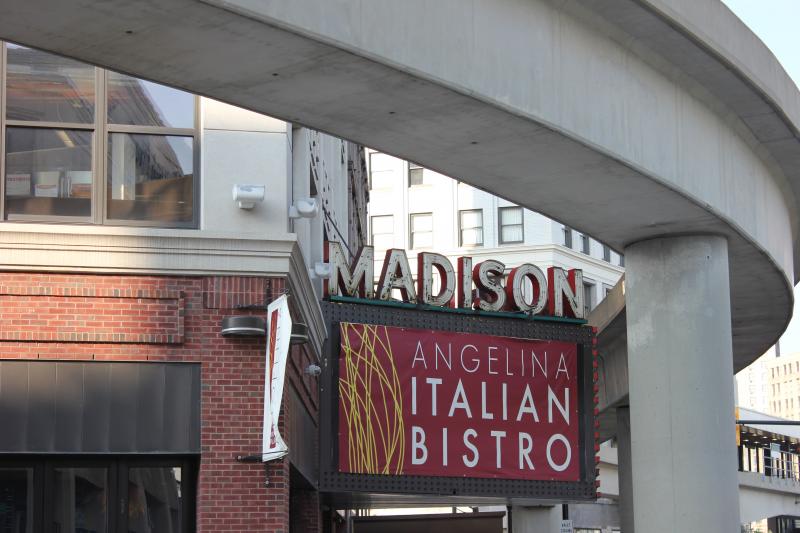 One such leader is Dan Gilbert, the founder of Quicken Loans, and the man who’s bankrolling Detroit’s revival. He’s spent some $1.6 billion buying up and converting 12.5 million square feet of downtown real estate, moving 12,000 of his employees into many of those properties, and backing hundreds of startups with a support structure around them. Nearly every major economic effort in downtown Detroit can in some way be traced back to Gilbert. Far from building a Potemkin Silicon Village, locals say he’s given the city the kickstart it needs.

Quicken Loans is not alone. “Corporates are the X factor,” said one entrepreneur. Simply as vast repositories of talent, local automakers in particular—General Motors, Ford, Chrysler—make a big dent in Detroit’s universe. Engineering talent is legion; for even a fraction of them to become entrepreneurs would be a game-changer. Many of these companies depend on vast regional supply chains with tributaries running to numerous small and medium-sized enterprises.

Some local entrepreneurs described building bridges with corporates as a “slow slog.” Their startup may be dead by the time a purchase order arrives from a major auto firm. As one entrepreneur attested, “You have to connect to the right person inside who can be your champion, who can understand to some extent that whole innovation approach.” Yet these companies remain the backbone of a global network with Detroit at the center.

Not all large institutions are alike. State and local governments are becoming more of a startup booster and collaborator than previously thought possible. The State of Michigan came in for particular praise after Detroit’s bankruptcy. Rather than local government being a constant source of economic woe, startups say they’re eager to find solutions. Even on something simple, such as crime, Detroit’s made big strides—bright lights and blue uniforms now line downtown streets.

Downtown Detroit’s social fabric means a supportive community to entrepreneurs, especially the young and talented ones the city so desperately wants and needs.

“If you want to build something here, people will rally to your cause,” said Eleanor Meegoda, who recently worked as a program manager with Mason, a Detroit-based maker of phones and tablets.

Together they’re beginning to weave the first strands of a distinct startup culture bred out of desperation. Detroit’s entrepreneurs have had to be innovative thinkers because the status quo was so ruinous. Even today, roughly 140 square miles of Detroit lie vacant or dilapidated. It doesn’t just take vision to make something of that, they say, but a whole lot of pride and crazy. As one successful local put it, “I didn’t get here by following the rules.”

There’s just one catch: There still aren’t that many startups. There were roughly 100 as of April of this year. Seattle, a city with roughly the same population, had more than 800 startups. The reality is that Detroit has little startup history and a nascent founder community. In fact, when 1776 and the Chamber surveyed the civic and social innovation space, there weren’t enough respondents to make the findings statistically significant.

But startup communities take time. As TechStars’ Brad Feld has argued, it can take around 20 years for a healthy startup ecosystem to form. It also takes time for a particular culture to set in, especially one that will help harness big ideas to regional specialties. Detroit is only a few years in—and recent years have hardly been balmy.

To really get a sense of Detroit’s potential then, look beyond downtown. The region around the city boasts the 14th-largest economy in America and is chock full of vibrant, healthy firms and thriving commuter towns. It boasts some of the best universities in the country, including University of Michigan-Ann Arbor, which was recently awarded a giant testing facility for driverless cars. In practice, people and businesses think regionally because that’s still the big play. And the goal for Detroit’s startups, they say, is to bring this regional activity into their community where they can build strong networks ready to compete on a more national level. The two largest concentrations of startups in the region are in downtown and Ann Arbor. How can these communities come together?

Talent is not clustered in Detroit either. Many local entrepreneurs got a job or degree elsewhere and choose to come back later. Cost is often a big attraction for Detroit’s diaspora. Let’s face it: Detroit is crazy cheap. It’s easier to be patient with a startup when its founder is not burning cash on rent. That low cost also makes it easier to attract talent to Detroit, particularly for the millions in its diaspora. The region is also seeing high demand from families moving back to their home state, particularly to bucolic places like Ann Arbor.

While some attested to the collaborative nature of downtown startups and the constellation of bigger players—public and private—that revolved around them, even more wondered just how far that community vibe reached. Contrary to the message of the roundtables, our surveys revealed a feeling of little community support. Go outside of downtown, they say, and the startup scene is dead until you reach Ann Arbor.

“One of the challenges we have in Michigan is that our innovation culture is hypercompetitive,” said Jean Redfield of NextEnergy. “It’s not network based.” As we found in our Innovation That Matters report, these sort of bottom-up networks combined with top-down reform—half culture, half economic structure—is part of that secret sauce of startup hubs. “We have to have network-based ‘coopetition’ and friendly co-investment,” Redfield concluded, “to grow brand new industries here to solve the problems of the world.”

For Detroit to continue growing as a startup hub, a few things will have to happen: 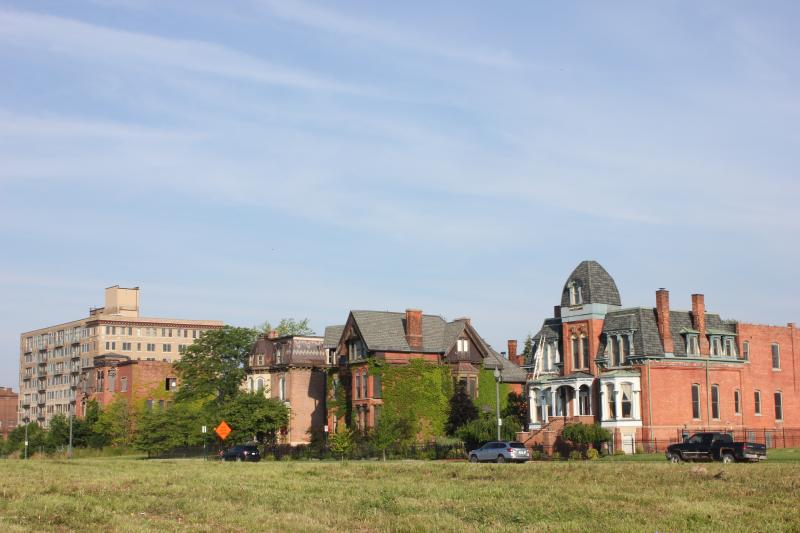 Detroit is everything you have heard. Are there miles of urban blight? Yes. Is Motor City a source of hope? Absolutely. Take Brush Park as an example. Long a magnet for photographers eager to get a shot of ramshackle Victorians being reclaimed by prairie in the shadow of downtown, the neighborhood is now a model of the mayor’s reclamation efforts and populated by moneyed hipsters. On an average weekday, it’s northwest corner is stuffed with cars coming and going from the neighborhood Whole Foods. The recession turned Brush Park into a blank slate that soon became filled with ideas of what an industrial city could become with its back against the wall.

Startup communities thrive when the bottom-up growth of networks is met with top-down leadership and platform-building, all of which in turn harness local talent and capital to innovative ends. Detroit is starting on this very path. Pair this economic structure with a culture that embraces new ideas and open-ended community and you have the makings of a Detroit for the digital age.

“Everyone in Detroit is pulling together,” said one rocker turned resident. “It’s like screw everybody—we’ll make the city our own."