Chasing a lifelong dream and becoming a business owner at the same time seems like a nearly impossible feat, but for three hopeful veterans, it’s a real possibility this December. Representing the Army, Navy, and Marine Corps, the three elite finalists for the 2017 Transition Trucking: Driving for Excellence Award are in consideration for the opportunity to take the next step in their driving careers, becoming an owner-operator and receiving the keys to a fully-loaded Kenworth T680 truck.
Presented by Hiring Our Heroes in partnership with Kenworth Trucking and FASTPORT, the award is part of an overall effort to create immediate career opportunities for transitioning military personnel and inspire the hiring of more veterans, national guard members, and reservists into the trucking industry.
This year’s recipient of the award will be crowned 2017’s top military veteran rookie driver and presented with a Kenworth T680 truck in a ceremony at the U.S. Chamber of Commerce in Washington, D.C, on December 15, 2017.
“The three finalists for the Transition Trucking award have capitalized on the skills they developed in the military and quickly translated those skills into success in an industry that allows them to play a vital role for American businesses,” said Eric Eversole, a vice president at the U.S. Chamber of Commerce and president of Hiring Our Heroes.
The field of finalists represents skillfully trained military professionals from three different service branches, as well as various military occupational specialties. Nominees include: U.S. Navy veteran Daniel Shonebarger of Columbus, Georgia; U.S. Army veteran Gregg Softy of Athens, Alabama; and U.S. Marine Corps veteran Wayne Roy of Pittsfield, Massachusetts. 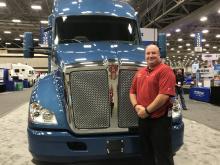 Wayne Roy
Wayne Roy has always had a passion for helping others, something he says his military career allowed him to do on a regular basis. When it came time to look for a civilian career, Roy felt that trucking offered a similar opportunity to make a positive impact.
“If you think about your daily life, you would discover that everything you eat, use, wear, or sleep on arrived by truck. I felt that I would still be able to help people in this career field,” Roy said. “In the Marine Corps, we are shown to go above and beyond in everything we do and that has spilled over into my driving career. My fiancé and I want to become owner-operators. We want to give as many opportunities to the new drivers as possible to improve the trucking industry, to get professional drivers in here, and make sure they thrive.” 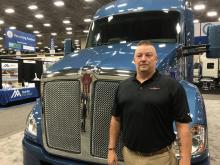 Gregg Softy
Gregg Softy spent a 28-year career in the Army, deploying multiple times to many different countries. He loved his leadership roles in the military and serving alongside his soldiers, but when considering his next step after active duty service, Softy found that he had another dream yet unfulfilled.
"Graduating from West Point, the normal career path is not to leave the Army and be a truck driver. My wife told me, 'You know what you want to do. You know what you love. Let's do it!' The next day I sent in my retirement paperwork and I decided to be a truck driver," said Softy. "I spent so much of my time in my military career witnessing other countries around the world, it is nice to have the time and opportunity to explore America." 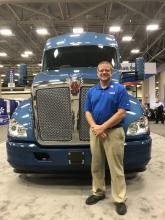 Daniel Shonebarger
Daniel Shonebarger spent eight years in the Navy deploying three times. During his sea service assignments, Shonebarger still made time to participate in volunteer activities. Now, as a driver, Shonebarger finds similar satisfaction in new and fulfilling ways.
"Trucking has made my life interesting and adventurous. I have many different stories to tell every day. There is something to be said about shifting through gears in the biggest vehicle on the road. The responsibility that trucking entails is tremendous and I love that," Shonebarger said. “I enjoy talking to the people I meet and the other drivers I see along the way. Most days it doesn't seem like a job, but more of an adventure. I enjoy every minute of it."
Each man has hopes of one day becoming an owner-operator. For the veteran selected for the 2017 award, that dream is about to become reality.
Veterans