When Daily Business Stops: The Cost of the Boston Bombings 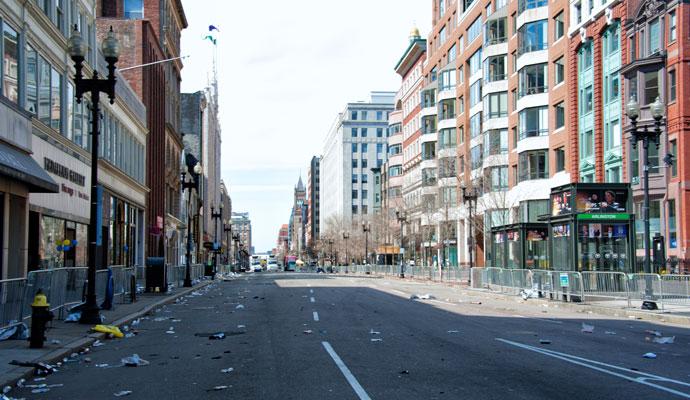 As the Boston area begins to recover from the tragic and unprecedented events of the past week, the lessons learned will be far reaching.  Emergency management professionals, like their counterparts in law enforcement, are pretty good culturally at pulling together “after-action” reports that chronicle what they did right and what they can do better next time.  Those lessons learned will offer new chapters to study and consider in terms of planning and preparations for any future incidents of this magnitude but in terms of the private sector, there are a number of lessons learned that need to be studied as well.

The manhunt for the bombing suspects unfolded had a real dollars and cents cost to it, with the unprecedented closure of the Boston area’s mass transit systems as well as the request by Massachusetts Governor Deval Patrick and Boston Mayor Thomas Menino for businesses to close for the day.

With people not going to work and office buildings closed, along with schools and universities, the regular daily commerce that is life in a major metropolitan city stopped.  In what looked like a scene from a science fiction film, streets that would normally have thousands of people doing their daily routine were empty of people, with the exception of a police officer on foot patrol or a police vehicle driving through it.

In the midst of the Boston manhunt, the Washington Post’s Brad Plumer asked an appropriate question: “The entire city of Boston has shut down. How much will this cost?”

Plumer then quoted a Bloomberg BusinessWeek report that estimated the shutdown could cost Boston between $250 million and $333 million per day, but said that it was “a very rough guess.”

In the Fiscal Times, Alan Clayton-Matthews, a professor at Northeastern University who studies the regional Boston economy, is quoted as saying that “the short-run impact [would be] pretty much like a snowstorm.”

Fortunately for everyone, the remaining suspect was apprehended and the shutdown of Boston only lasted one day. Nevertheless, the unprecedented actions taken by elected officials, with the encouragement of law enforcement and public safety officials, to shut a thriving metropolis down is sure to create debate about the circumstances required in order to bring regular life and commerce to a stop.

In the past, mayors and governors issued evacuation orders for approaching storms and shut down transportation systems, much as New York City Mayor Michael Bloomberg and others have done as a result of incoming hurricanes and other weather systems.  Additionally, curfew orders and the prohibition of public access to select areas have been put in place before following major events, such as tornados or floods. This has been done so as to provide for public safety as well as to direct stressed and limited resources (such as emergency personnel, power, water, and food) to the affected areas.

Since the attacks on 9/11 and the Gulf Coast hurricanes of 2005 (Hurricanes Katrina, Rita, and Wilma), which affected so many cities and states  physically and economically, the private sector has played a much more vocal and active role in planning and preparing for whenever an event of mass disruption may unfold.  The twin bombings in Boston, while long feared as a possibility by many that someone could strike any American city or large public events, have opened a new chapter of questions and debate about critical operations when cities find themselves in the crosshairs of very dynamic and unpredictable threats.

Going forward, increased communication and cooperation between elected officials, the private sector enterprises in their community as well as the public at large will be essential so that when circumstances dictate they can respond as swiftly and strongly as Boston showed us this past time.  A “closed” sign is never a good sign for business, but there are times when it’s the right call for everyone.  Learning from those conditions will make sure it is a sign not seen very often, if at all.

For more on what business is doing in Boston, the U.S. Chamber of Commerce Foundation Business Civic Leadership Center is tracking corporate donations.