The Business Case for Civics Education

The Business Case for Civics Education.png 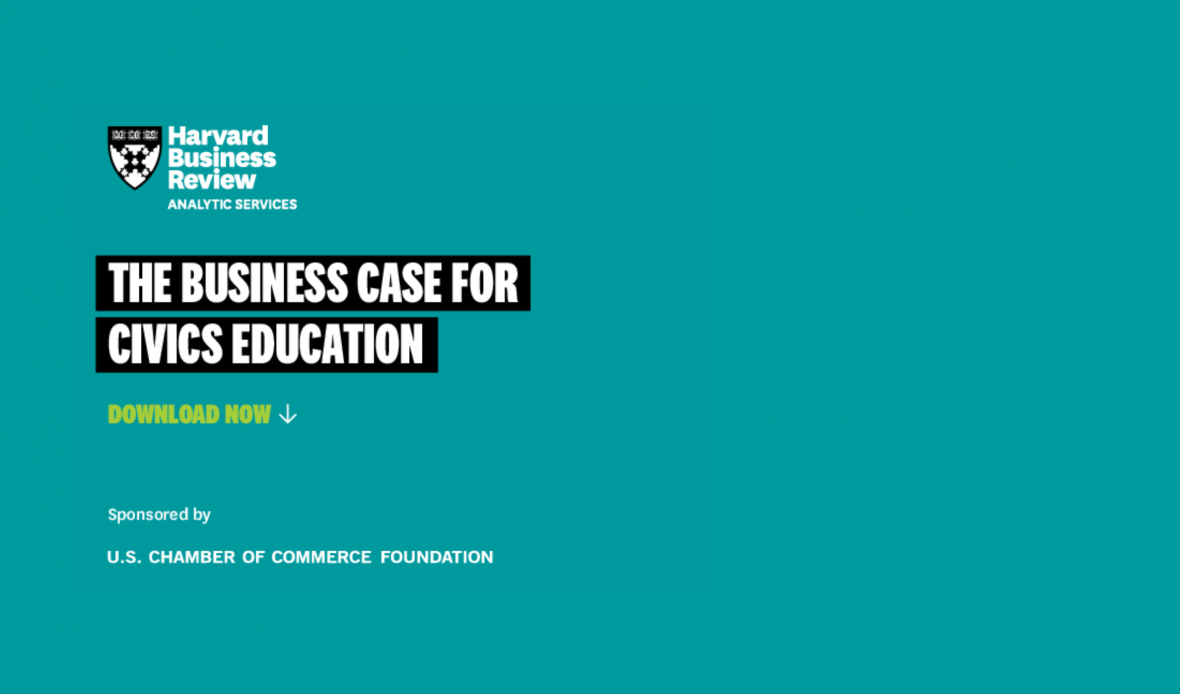 Civics sounds old-fashioned, but it might be the antidote to some of the biggest challenges organizations are facing in the 21st century. Nearly a decade ago, Justice Sandra Day O’Connor warned of a civics education crisis in our country. Since then, we’ve seen further deterioration. Polarization and incivility are driving wedges between people at a time when the benefits of a quality civics education, which gives young people the knowledge, skills and disposition to be successful citizens, have never been more valued by employers. “It is ironic that at precisely the moments when civility is needed most, it seems to be valued the least,” says United Airlines CEO Oscar Munoz.

Corporations are increasingly embracing how powerful “enlightened self-interest,” as Benjamin Franklin called it, can be as they create deeper linkages with their employees, customers, suppliers, and the communities they operate in. Civics knowledge is an important aspect to this effort. “We must listen to one another, learn from one another, and be able to engage with one another productively in order to drive collective success,” says Stanley Bergman, the chairman of the board and CEO of Henry Schein Inc. who immigrated to the U.S. in 1976 from South Africa. “Civics knowledge provides the basis for respectful behavior because it teaches the importance of applying individual talents on behalf of the common good.”

In fact, current and future work more and more requires that employees have a knowledge of economic and political processes; skill in understanding presentations in a range of media; the ability to work cooperatively with others, especially those from diverse backgrounds; and “positive attitudes about working hard, obeying the law and engaging in discussion that leads to innovative and effective civic action in the community.”[1]

But preparedness for what is needed is lacking. Consider that only 39% of Americans were able to name all three branches of the federal government in a 2019 survey by the Annenberg Public Policy Center. Indeed, the state of civic engagement concerns Allstate Chairman and CEO Tom Wilson. “Many people do not know how our government works, which leads to confusion on political outcomes and, ultimately, distrust in the system,” he says.

According to "Guardian of Democracy: The Civic Mission of Schools," a 2011 report published by the Leonore Annenberg Institute for Civics and the Campaign for the Civic Mission of Schools, there is also a strong link between civic learning and the workforce challenges of tomorrow. “There is considerable overlap between the skills acquired as part of civic learning and the skills required in employment,” the report states. “Students receiving high-quality civic learning score higher on a broad range of twenty-first-century competencies than those without.”

In many ways, employers are ahead of the civil discourse curve. They have had to be, since workplaces are the one place where all races, religions, and ages congregate and need to get along. “For corporations to be successful, to be global, to serve truly diverse customer segments, they actually have to be able to get a diverse array of people work collaboratively and toward shared goals,” says BET Networks President Scott Mills, adding that business has made massive investments “in creating healthy inclusive environments.”

This report will examine the state of civics knowledge in the U.S. and why improving it is so important to our macroeconomic well-being. More education is one part of the issue, but so is increasing the level of respect that people have for disparate views, compromise, and each other.

Typically, GDP is highest in countries that have the most stable political systems. So it’s important never to take our political system for granted, and that means—among many other things—we need to ensure strong civics programs in our schools,” says David A. Moss, the Paul Whiton Cherinton Professor of Business Administration at Harvard Business School.

[1] Guardian of Democracy: The Civic Mission of Schools, published by the Leonore Annenberg Institute for Civics of the Annenberg Public Policy Center at the University of Pennsylvania