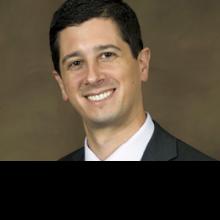 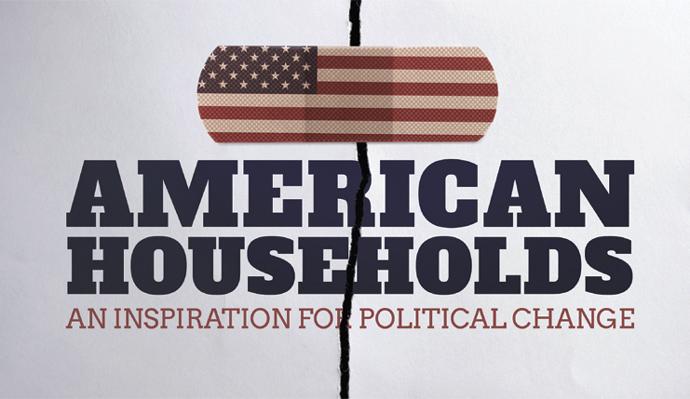 The word “resilience” in the context of the U.S. fiscal outlook conjures up images of painful budget cuts and financial sacrifices, as if only a radical austerity plan could rebalance our federal budget. Yet a careful understanding of the recent financial vitality of the American public lends a rosier hue to this bleak picture. Both the foresight that Americans demonstrated during the recent recession and the ensuing stable recovery of household balance sheets are encouraging signs of the promise that our resilience holds for facing future challenges.

Economic and financial resilience among the public will be necessary to fully address these challenges, but our elected officials must also demonstrate a political resilience. While many American households have responded and will continue to respond wisely to recent economic adversity by preparing for a more uncertain economic future, lawmakers need to strengthen their political courage to reform unsustainable programs such as Medicare and Social Security. At minimum, modest changes to improve the viability of these programs need to be vigorously pursued. The good news is that our leaders can both draw on the public’s resilience for inspiration and rely on the American people to be resilient in the face of necessary changes.

Household Resilience and the Great Recession

The financial crisis in the fall of 2008 shook the entire global economy. Asset prices suffered a shock: the housing bubble burst, sending home prices plummeting, and the stock market saw its biggest one-day drop in two decades. The U.S. economy contracted sharply in the fourth quarter of 2008, which recorded the largest quarterly drop in GDP in fifty years, contracting 8.9% on an annual basis followed by a 5.3% drop in the first quarter of 2009.1 U.S. employment took a similar dive, with payrolls declining 712,000 per month during the record-breaking period of job losses between October 2008 and March 2009.2  The unemployment rate jumped from 5% at the start of the recession in December 2007 to a high of 10% in October 2009, several months after the recession technically ended.3

Nevertheless, households also demonstrated resilience to this tremendous economic downturn and fiscal shock. This resilience is not only admirable; it is critical. It demonstrates American households’ awareness of and responsiveness to changing fiscal pressures. An understanding and appreciation of this responsiveness will be necessary for policymakers seeking to change programs currently promising retirement benefits to tomorrow’s retirees.

Evidence of this resilience can be seen in the response of the U.S. personal savings rate to the recession as well as the rebound of the household balance sheet following the recession.

The personal savings rate, which had been in decline for decades, rose sharply as the economy sank into recession. Chart 1 illustrates how the rate more than tripled from an average of 1.6% in 2005, prior to the recession, to an average of 5.6% in the first half of 2009, as the recession wound down. While the drop in consumption exacerbated the recession, households’ willingness to tighten their belts, defer nonessential purchases, and work toward insulating themselves from the risk of job loss is a perfect example of the resilience of the American household. 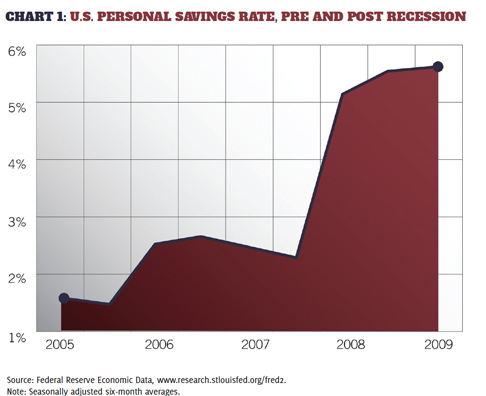 Since 2009, a clear repair of household balance sheets has been underway. Though the labor market has been tepid and unemployment (particularly long-term unemployment) remains stubbornly high, households have reduced their debt burdens and increased asset values. Low interest rates have played an important role, as households with sufficient equity in their homes rushed to refinance at lower rates, sometimes also with shorter borrowing periods. Since 2008, the average rate for a 30-year conforming mortgage has dropped from 6.5% to 4%.

Chart 2 illustrates the strong rebound in household balance sheets. At the end of the first quarter of 2013, household net worth was $70.3 trillion, slightly above the level in 2007 prior to the recession. Both an increase in asset values and a decline in liabilities contributed to this rebound. Household debt declined modestly but steadily from 2008 through 2011 and was almost flat in 2012. Total financial assets increased from $43.4 trillion in 2008 to $57.7 trillion in the first quarter of 2013.7  Corporate equities and mutual fund shares increased in value from $9.3 trillion in 2008 to $17 trillion in the most recent quarter.8 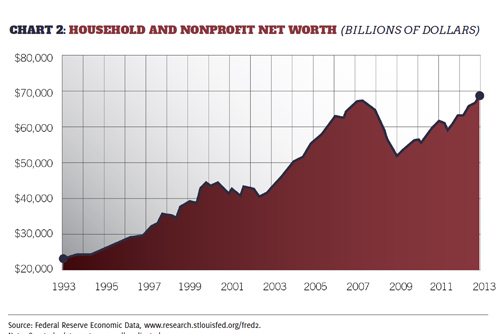 Need for Political Resilience to Face Our Fiscal Challenges

The fiscal challenges our economy faces in the coming decades cannot be resolved only by increased levels of thrift and financial buffering among the public. While many American households responded to the recent downturn in the economy by working to build reserves and increase personal savings in an effort to ride out the recession, resolving our fiscal challenges simply cannot be left entirely up to citizens. It requires political action, which in itself requires a particular sort of resilience.

Our country has experienced large fiscal deficits in recent years as a result of increased federal spending and temporarily depressed tax revenues due to the weak economy, but the deficit challenges in the coming decade are of a distinctly different sort. Federal entitlement spending on both health care (primarily Medicare and Medicaid) and retirement security (Social Security) is on unsustainable fiscal footing. These programs are solvent at the moment, but they are projected to grow beyond their means. Scheduled outlays in Social Security will exceed revenues for that program in the next decade, and the gap will remain. Medicare, while its growth rate moderated in recent years, is scheduled to again grow faster than the overall economy.

The Social Security and Medicare Trustees recently issued their annual reports outlining the size of these programs and their projected growth. Once again, the long-run forecast is bleak. The causes of the problems in both programs are a mix of both demographic changes and excess cost growth. Particularly in light of the recent heated debates in Washington over spending and taxes, the pursuit of solutions to these problems will demand political resilience as well as political compromise.

According to the Medicare Trustees’ Report: Total Medicare expenditures were $574 billion in 2012. … [U]nder current law, expenditures will increase in future years at a somewhat faster pace than either aggregate workers; earnings or the economy overall and that, as a percentage of GDP, they will increase from 3.6% in 2012 to 6.5% in 2087. 9

Furthermore, the report projects that if Congress continues to override scheduled cuts in physician reimbursement for Medicare services and postpones or repeals other large scheduled cuts in health care reimbursement, “then Medicare spending would instead represent roughly 9.8% of GDP in 2087. Growth of this magnitude, if realized, would substantially increase the strain on the nation’s workers, the economy, Medicare beneficiaries, and the Federal budget.” Arguably that’s an understatement.

Chart 3 illustrates the Trustees’ projected growth in Medicare and the projected growth in noninterest income available to fund the program. This graph illustrates three concerning trends. First, the size of this program is expected to nearly double as a share of the overall economy. Second, general revenue transfers are projected to increase dramatically. Third, despite the fact that Medicare funding will increase by roughly 2.5 percentage points of GDP, it still will not be enough to keep pace with the growth of expenditures.

Taking together all the projected income and costs in the Medicare program over the next 75 years and discounting future receipts and outlays, the present value of the actuarial balance of Medicare is –$4.8 trillion.10  While these numbers are somewhat uncertain, there is no plausible scenario whereby one can conclude that the status quo represents a sustainable path. 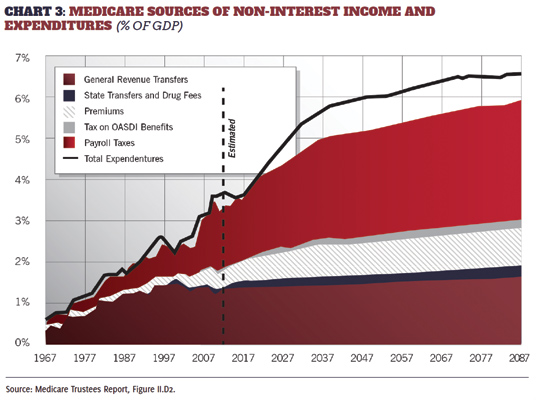 The situation in Social Security is similarly dire. The gap between the cost of Social Security and the noninterest income to the program is projected to be 0.9% of GDP over the next 75 years, rising to and remaining at 1.4% of GDP in the long run.11

According to the Social Security Trustees:

For the combined OASI and DI Trust Funds to remain solvent throughout the 75-year projection period: (1) revenues would have to increase by anamount equivalent to an immediate and permanent payroll tax rate increase of 2.66 percentage points (from its current level of 12.4% to 15.06%); (2) scheduled benefits during the period would have to be reduced by an amount equivalent to an immediate and permanent reduction of 16.5% applied to all current and future beneficiaries, or 19.8% if the reductions were applied only to those who become initially eligible for benefits in 2013 or later; or (3) some combination of these approaches would have to be adopted.12

Chart 4 shows the widening gap between the Social Security benefits that are scheduled to be paid in the coming years (costs) and the projected Social Security revenue from the payroll tax (noninterest income). Until recently, revenues exceeded costs, but that has now reversed. Costs are projected to increase from 4.4% of GDP in 2008 to 6.2% of GDP in 2035. Payroll tax revenues will increase slightly from 4.6% to 4.9% of GDP by 2022 but then return to 4.6% in the long run.

Time for a Resilient Political Agenda

The two largest entitlement programs operated by the federal government are on unsustainable paths. Medicare is projected to grow faster than the overall economy over the next 75 years, which necessitates ever-increasing taxes. Soon, Social Security will only have enough resources to pay 77% of its promises.

These challenges, however, are not new. Lawmakers have known for decades that these programs are not sustainable as currently structured, yet they have continually shirked their responsibilities to enact necessary programmatic changes. From time to time, bold proposals have been made, but we have yet to see an attempt at reform gain traction.

A number of factors are obvious impediments to political action. Many lawmakers worry that the consequence of political courage—voting to restrain the growth of entitlements—will be harsh attacks by rivals in the next election cycle. Other lawmakers worry that such reforms will lead to inadequate health care for seniors or increases in poverty and financial risk. 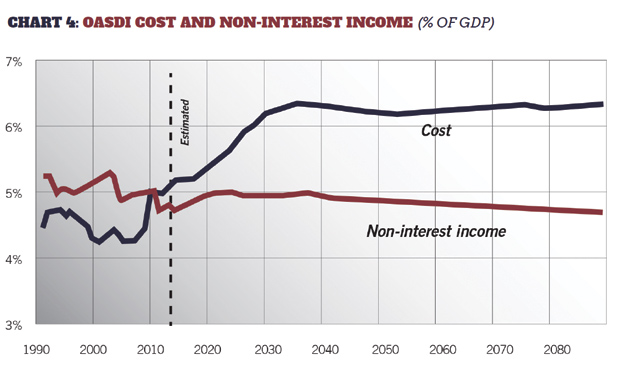 The fear that future seniors will be uncared for should these programs be made sustainable, in whole or in part, through reductions in future benefits is misplaced. Why? The resilience of the American worker, family, and household. A carefully planned and communicated change to Social Security and Medicare that slows the growth of benefits will undoubtedly be met with an increase in personal savings. Critical to the success of such a reform is gradual change, and that requires an immediate start to the reform effort.

Our leaders can draw inspiration from the resilience of the American people and channel it into political resilience to do what is necessary—and most effective—to reform entitlement programs. In addition to inspiration, the public’s resilience can also provide policymakers with the assurance that citizens can withstand necessary financial sacrifices. This can bolster leaders’ resolve to finally take action to return our country to fiscal health—before resilient citizens become beleaguered citizens.

Alex Brill is a fellow at the U.S. Chamber of Commerce Foundation and a research fellow at the American Enterprise Institute (AEI). A former policy director and chief economist of the House Ways and Means Committee, Brill also served on the staff of the President’s Council of Economic Advisers (CEA). He is also the founder of Matrix Global Advisors, a boutique consulting firm that provides legislative and strategic analysis of public policy matters to Fortune 500 companies engaged in Washington strategies and financial services clients making investment decisions.