U.S. Chamber of Commerce Foundation / BHQ / It’s Been a Slow Climb to the Top

It’s Been a Slow Climb to the Top 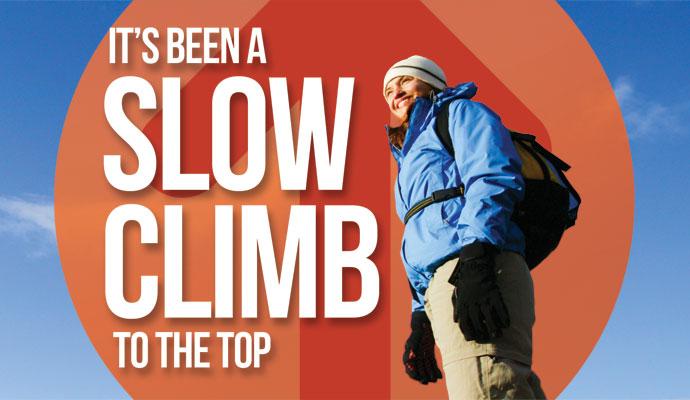 2012 seemed like a pretty significant year for women across American society. In November, Americans elected a spate of new women to Congress—today, we have a record 20 women in the Senate and 82 in the House.

In the business world, we saw several talented women soar to top posts in some of America’s leading corporations. After serving four years as Facebook’s chief operating officer, Sheryl Sandberg was the first woman named to the social networking giant’s board of directors. Marissa Mayer was named president and CEO of Yahoo!, making her the youngest chief executive of a Fortune 500 company. Ginni Rometty of IBM, Marillyn Hewson of Lockheed Martin, and Phebe Novakovic of General Dynamics have each recently become Fortune 500 CEOs. And numerous others took the helm of Fortune 1000 companies or were named chief operating officer or chief financial officer.

Yet what seems like a banner year belies the underlying trend. Some 40 years after the feminist movement, women have hit a plateau when it comes to the power seats, particularly in the C-suite or on corporate boards.

This stasis is not for lack of effort, education, or accomplishment. Since the cultural shift of the 1970s, women’s professional options are wide open. Women are overtaking men in education, earning 57% of bachelor’s degrees, 60% of master’s degrees, and 52% of doctorates. Women make up nearly 50% of the U.S. labor force, and they are surging into traditionally male-dominated fields like medicine, law, and, yes, business. But despite the fact that women are working harder than ever and achieving more, the upward path to the highest ranks of leadership remains narrow.

A new survey by Catalyst, a leading nonprofit dedicated to expanding opportunities for women in business, reveals the stagnation. Among Fortune 500 Companies, the number of women holding executive officer positions was 14.3%—the third consecutive year of no growth. Women’s share of board seats held steady at 16.6% for the seventh year in a row. The survey also found no growth among women of color serving on corporate boards, remaining at an unacceptably low rate of 3.3%.

The numbers don’t get much better when you look at the percentage of women in executive posts at mid-cap companies—those with $1 billion to $7 billion in market capitalization. The U.S. Chamber of Commerce partnered with Georgetown University’s McDonough School of Business on a study which found that, on average, barely 6% of executive positions at the mid-size business level are held by women.

Anne Doyle, an author and businesswoman who broke barriers in the journalism and automotive industries, put it this way in her book Powering Up:

The path we’ve been on for nearly four decades is smoothly paved, brightly lit, and getting more crowded every year. The only downside is this: it’s a bit like collectively treading water. We’re working very hard, but too few of us are going anywhere we haven’t already been.

There’s no question that women possess the talent, energy, experience, and drive to rise to the highest posts of leadership. So why isn’t it happening to a greater extent?

Why? There’s No Simple Answer, No Magic Bullet

It’s hard to pinpoint the reason for the slow growth of women’s advancement.

The public and policy debates over women’s roles and opportunities in the workforce often center around work-life balance. A new spotlight was cast on the issue last summer thanks to a widely read article in The Atlantic by Ann-Marie Slaughter, provocatively titled “Why Women Still Can’t Have it All.”

Slaughter, who had served as a top aide to Secretary of State Hillary Clinton, concluded that for a woman to reach great heights in her career while successfully juggling the demands of a family, she would have to be “superhuman, rich, or self-employed.” In other words, according to Slaughter, both a dream job and a well-functioning family is not in the cards for most American women today—not simultaneously anyway.

What was also essential in Slaughter’s case was the strong supporting role of her husband. He had the job flexibility to take on more of the domestic workload at the peak of her career. This makes the important but often underemphasized point that work-life balance is a challenge for men too.

Controversy erupted over the article, with leaders in the feminist movement shooting back that “having it all” was never the promise and that it’s an unreasonable standard for women to aspire to anyway. Other critics charged that Slaughter failed to account for the many women who consciously choose not to have children, thus having greater flexibility to pursue demanding careers.

If nothing else, the article and the debate it inspired proved this: We’re having many of the same conversations today that we were a generation ago. Striking work-life balance has always been viewed as the “easy” solution to a fulfilling career. The magic bullet. But we’re finding now that maybe it was a little too easy. Perhaps our view of the challenges and pursuit of solutions have been overly simplistic.

We Need a Breakthrough … In Our Thinking

What we need is a breakthrough in our understanding of the barriers standing between women—all women—and achievement.

To devote the fresh energy and thinking this critical issue demands, the U.S. Chamber of Commerce established the Center for Women in Business (CWB) last year. Through CWB, the Chamber works to create opportunities for women to advance in the business world and to find professional fulfillment. Our goal is to see more women rise to positions of executive leadership in companies of all sizes and to serve on corporate boards in greater numbers. Central to CWB’s efforts are education and mentorship, and the center is building a growing organization of women leaders and entrepreneurs to encourage networking and spur professional growth.

CWB is also committed to driving the debate forward through innovative thinking and investigation. The center released Advancing Women to the Top on February 28, groundbreaking research that examines best practices of Fortune 1000 companies that are good at promoting women at the board, C-suite, and management levels. The report will present the state of women in the workforce, reveal barriers to progress, and outline strategies and steps companies can take to advance women in leadership.

We’re in It Together

Some readers may react quizzically to an article on women’s advancement written by a man. Before you point out the irony, remember that we’re all in this together.

Business leaders—men and women alike—must be educated and engaged in order to address this challenge. It is a workforce issue and an economic issue, as much as it is a women’s issue. And we must not forget that it impacts men too. We should also examine the challenges they face in juggling personal and professional demands.

The bottom line is that anyone who wants to see their businesses prosper and flourish, or to see the U.S. economy grow, should care deeply about fostering a competitive American workforce that leverages the full potential of all our people.

Women have the entrepreneurial spirit that is essential to our long-term economic growth. Case in point, in the face of slowing prospects for advancement in many traditional business settings, women are striking out on their own. Women-owned companies—the vast majority of which are small businesses—make up 29% of all U.S. enterprises. There are 8.3 million women-owned businesses in the United States, and they contribute $1.3 trillion annually to our economy and account for 16% of U.S. employment. Clearly, women are making a powerful impact through their own enterprises.

The business community can’t afford to ignore the disparity in executive leadership—to do so is to discount half of our talent pool or to pass up many of our best and brightest. We can and must do more to leverage the education, skills, ideas, and innovations that women bring to the table—at the very highest levels of leadership.

David Chavern is the executive vice president and chief operating officer of the U.S. Chamber of Commerce. He is the founder and president of the Chamber’s Center for Women in Business.